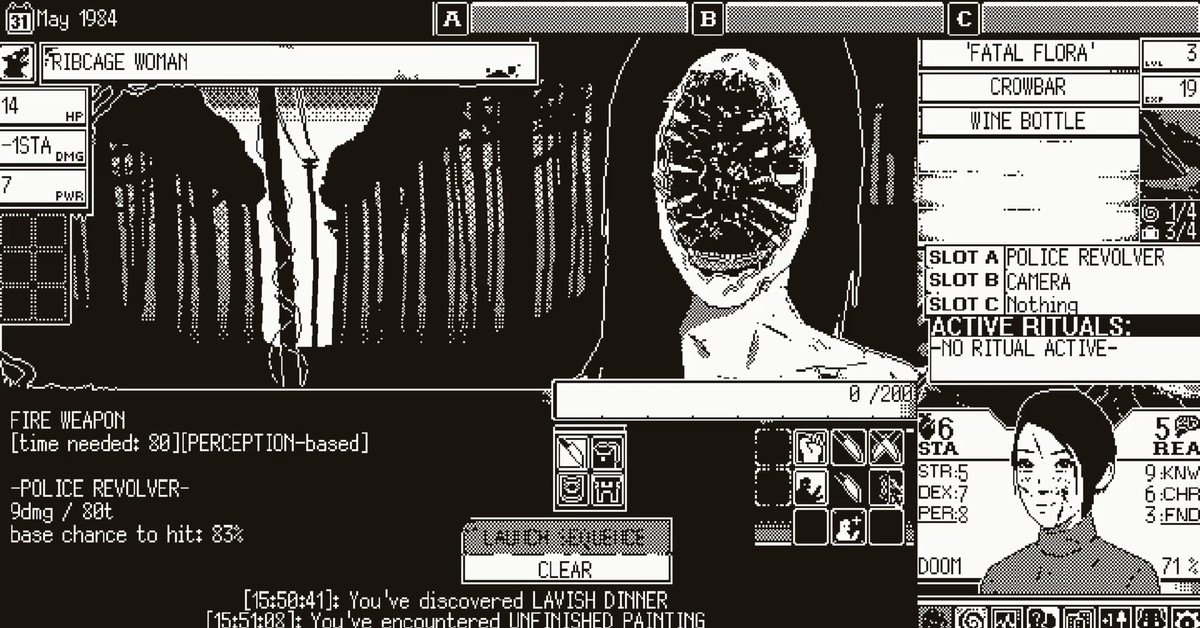 Little is more terrifying than the unknown and the inevitable. The combination permeates the work of horror authors H.P. Lovecraft and Junji Ito, whose characters are driven to invariably horrible ends by mystifying forces, whether they’re an alien meteor or a rock full of human-shaped holes.

World of Horror, a “1-bit horror game” that enters Steam Early Access tomorrow, blends nods to Ito and Lovecraft with the look of a 1980s HyperCard game. It’s set in a quiet Japanese town filled with eldritch beings, wild-eyed cultists, and impossibly twisted human forms. There is a meter labeled “DOOM” beneath your character’s portrait, advancing with every step you take.

But World of Horror is also a roleplaying game built around strategy and repetition. And its real feat isn’t letting you fight Junji Ito’s hair ghoul or face the cultists of an elder god, although that’s a great elevator pitch. It’s building something that hits players with a shock of creepiness, then evolves into a satisfying puzzle once that initial horror fades.

World of Horror was made by Polish developer and part-time dentist Pawel Kozminski (aka Panstasz), and a small demo launched on Itch.io in 2016. The full game will appear on the Nintendo Switch, PlayStation 4, and Windows and Mac OS X later this year. The Early Access version is something between the two — it has a small game’s worth of stories and features, but not as much as you’ll see at the official launch. Kozminski has also partnered with author Cassandra Khaw for some additional writing work.

I’ve been playing the Early Access build for a few weeks, and after around 20 hours, I’ve hit a soft limit on progress because of bugs and undeveloped features. The game crashes at frequent and unpredictable intervals, and it’s hard to distinguish complicated mechanics from simply unfinished ones. But even in this early state, it’s complex, substantive, and remarkably fun.

Playing World of Horror is like flipping through a comics anthology. After you pick one of several playable characters, it selects five stories from a larger pool of “investigations”: a popular ramen shop with a sinister secret, a best friend suddenly obsessed with eels, a ghost with scissors stalking the local school. You solve them by clicking locations on a town map, then facing random encounters while the game tells its larger story in a text box. A playthrough might last between 30 minutes and an hour, assuming you survive.

The individual encounters are single black-and-white cards — drawn, like the rest of the game, in MS Paint — that provide experience points or affect your Stamina, Reason, and Doom meters. (At 100 percent Doom, an elder god breaks free.) They offer a series of small, mildly unsettling choices. Will you risk opening a package on the subway, knowing its contents could either help or traumatize you? Do you burn the mysterious book you find in a mansion, or should you use it to learn a spell? Should you enter turn-based combat with some deliciously horrifying enemies — like the Doll Nurse, a blank-eyed creature that haunts the hospital, or the Class of 1971, a bus full of students merged into one body?

World of Horror is the best kind of roleplaying game: the kind where you can ignore 90 percent of the features when you’re getting started, then find a huge tangle of mechanics and choices underneath. Surviving one mystery is straightforward, and blundering through five isn’t impossible. But fully revealing the game’s secrets requires strategy, luck, and exploring a host of little features that seem useless until they become incredibly helpful.

Over time, you can learn which stories end with tough combat, which will help you recover health, and which are best for acquiring equipment. The investigations don’t seem to affect each other in a traditional roleplaying sense — characters won’t remember you, for instance, and locations don’t change based on your earlier actions. But your equipment and health carry over between cases, and sometimes you’ll realize that an item you acquired unlocks a new interaction or ending.

It’s a uniquely narrative-focused roguelite design that encourages you to delve into side stories and discover new items and encounters, even if it means losing the overall playthrough. And unlike many roleplaying games, World of Horror emphasizes how much random chance is involved. Some game achievements require playing over and over, hoping for the right lucky combination of items to turn up — although your prize is probably just discovering a new kind of torment.

This repetition makes World of Horror progressively less scary, of course. And the game’s stories sometimes feel a little too derivative. They’re a precise homage to horror manga, primarily Junji Ito’s work and classics like Kazuo Umezu’s The Drifting Classroom. But they rarely capture the cataclysmic, grotesque fatalism that makes those tales truly great, settling for a more generic pastiche. Even so, the efficiently evocative writing works no matter how many times you read it, and the simple art is a delightful cross between a retro video game and a newspaper clipping that’s been photocopied into oblivion.

After a while, each playthrough feels like going back to a familiar storybook — but with a wealth of quirky extra details waiting to be discovered. It’s almost soothing to click through the game’s Rolodex of abominations, hoping to unlock something you haven’t seen before. There is no reason for me to continue playing right now, and yet I keep doing it. By World of Horror’s logic, I think that means I’m doomed.