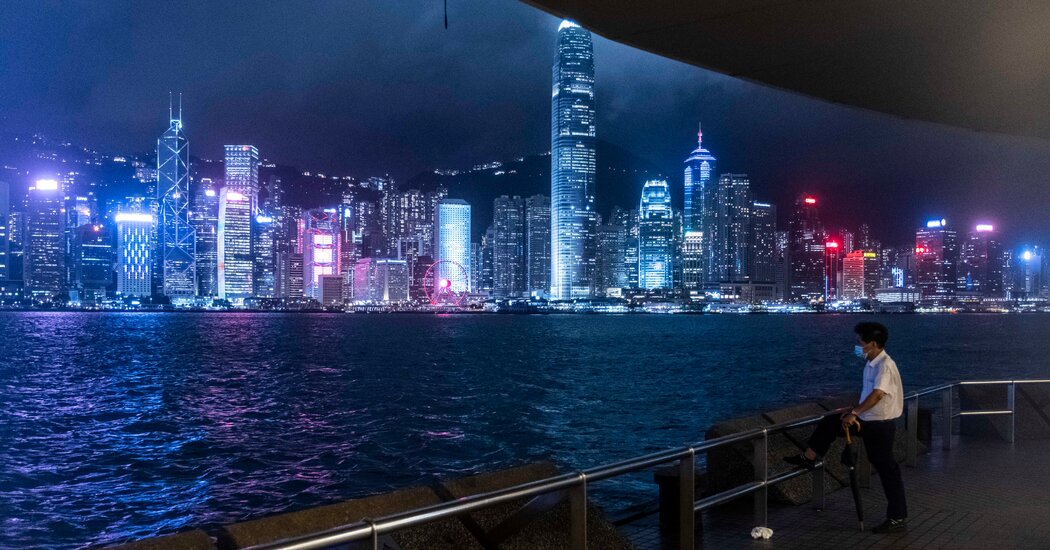 BEIJING — For weeks, as Beijing quickly drafted and imposed a stringent new national security law for Hong Kong, many in the territory feared the rules would be used to intimidate the opposition, but hoped they would not presage a broad crackdown.

Now those hopes have been dashed. Brushing aside international criticism and sanctions, the Chinese government has used the letter and spirit of the law to crush Hong Kong’s pro-democracy opposition with surprising ferocity.

In the last week alone, the authorities have ousted a tenured law professor at the University of Hong Kong who has been a key figure in the city’s democracy movement, and arrested four young activists on suspicion that they expressed support online for independence. They have also barred a dozen candidates from running for the legislature, using opposition to the security law as new ground for disqualification.

On Friday, the authorities postponed for a year the election itself, which had been scheduled for Sept. 6. While they cited the coronavirus pandemic as justification for the move, it underscored Beijing’s fears that pro-democracy candidates could triumph.

The breadth and severity of the actions reflect Beijing’s urgency to smother opposition to its encroaching authority over the territory after more than a year of political upheaval there.

The aggressive consolidation of power mirrors China’s broader moves to flex its political, economic and military might as the world is distracted by the pandemic.

Western nations have pushed back aggressively against Beijing’s measures, imposing sanctions and even suspending extradition agreements with Hong Kong, but to no avail. In some ways, it appears to have emboldened China, which blames the dissent in Hong Kong on foreign interference.

“The people of Hong Kong deserve to have their voice represented by the elected officials that they choose in those elections,” Secretary of State Mike Pompeo said in a radio interview on Thursday ahead of the postponement of the election. “If they destroy that, if they take that down, it will be another marker that will simply prove that the Chinese Communist Party has now made Hong Kong just another communist-run city.”

Wang Wenbin, the chief spokesman of China’s Ministry of Foreign Affairs, said that Beijing was allowing the Hong Kong authorities to decide the timing of the election. But he also insisted that Beijing would not be dissuaded by any foreign countries from doing what it deems necessary in Hong Kong.

“China is not afraid of intimidation by any external forces — our determination is unwavering and unshakable in safeguarding national sovereignty, security, and development interests,” he said.

On the mainland, China thoroughly stifles political dissent. For the authorities there, Hong Kong — with its nominal political autonomy and robust democracy movement — has been a major irritant, especially after huge protests openly and at times violently challenged Beijing’s control and even sovereignty over the city last year.

With its crackdown, Beijing is following the authoritarian playbook of countries like Russia, holding elections but managing them so that they cease to reflect genuine voter will. Russia’s leader, Vladimir V. Putin, recently orchestrated a constitutional referendum to perpetuate his rule — and then followed it up with a series of arrests, hoping to smother discontent before it could gain momentum.

Years in the making, the national security law created a climate of fear and uncertainty in only a matter of hours after it was imposed.

The day the law took effect, the police detained 10 protesters for national security violations, including a young man on a motorcycle with a Hong Kong liberation flag who collided with police officers. Tong Ying-kit, who was hospitalized after the collision, was later the first charged under the new law. He remains in custody.

The newly created agency to enforce the law, the Office for Safeguarding National Security, soon took up residence in the Metropark Hotel in Causeway Bay (a 4.5 rating on Tripadvisor.com) and surrounded it with barricades in a physical manifestation of Beijing’s growing authoritarian footprint on the city.

The agency is headed by Zheng Yanxiong, a senior Communist Party official dispatched from Guangdong, the neighboring province on the mainland. He is best known for his hostility to a short-lived democracy experiment in a Guangdong village, Wukan, nearly a decade ago.

On July 10, the Hong Kong police raided an independent polling institute whose computers were being used by democracy supporters for an unofficial primary to decide which candidates would run for the legislature. Five days later, the police arrested five activists, including a vice chairman of the territory’s Democratic Party, in connection with protests and violent clashes at Hong Kong Polytechnic University last November.

The four young activists arrested on Wednesday were all former members of Studentlocalism, a pro-independence group led by secondary school students that ended its operations just before the security law took effect. In the past, the group had typically distributed leaflets supporting independence outside schools.

Regina Ip, a cabinet member and the leader of a small pro-Beijing political party in the legislature, welcomed the arrest on Wednesday of the four activists, who ranged in age from 16 to 21. She said that their postings showed continued support for Hong Kong independence after the law went into effect, although the police have not elaborated on what the four specifically said.

Their arrest shows that the authorities are “acting in accordance with the law,” she said.

On Friday evening, Chinese state television reported that the Hong Kong police had issued warrants for the arrests of six democracy advocates who are now overseas. They are wanted on charges of promoting secession and colluding with foreign forces, according to the report — crimes that are punishable with life imprisonment under the security law. The police declined to comment.

One of the six, Samuel Chu, said on Twitter that he had been an American citizen for 25 years.

Also on Friday, Hong Kong’s secretary for justice said that David Leung, the city’s British-trained director of prosecutions, had submitted his resignation. Pro-Beijing politicians and the police had accused Mr. Leung of being too cautious about bringing charges against protesters, though he had prosecuted some high-profile activists. Mr. Leung did not issue a statement.

The spirit of the security law has been used to justify the dismissal of the professor at the University of Hong Kong, Benny Tai. After the rollout of the rules, Mr. Tai, who was convicted of public nuisance for his role in protests in 2014, helped organize the recent primary vote for the pro-democracy camp.

Beijing’s Liaison Office in Hong Kong supported his removal, describing it in a statement as “a just act of punishing evil and promoting good and conforming to the people’s will.” The security law was also invoked this week for the disqualifications of candidates for the legislature.

The legislature cannot have seats “for these unscrupulous individuals who are plotting to destroy” Hong Kong, the liaison office said. The Hong Kong government said that candidates who objected “in principle” to Beijing’s enactment of the law were violating the oath to uphold Hong Kong’s constitution.

The government also said it was unconstitutional to vow to block its legislative proposals in order to pressure the administration. Some opposition lawmakers had floated the idea of voting down the government’s budget. Under Hong Kong’s mini-constitution, known as the Basic Law, that could force the resignation of the chief executive, Carrie Lam, and new elections.

The yearlong delay in the election now gives the authorities time to disqualify more pro-democracy candidates from running and quash any remaining momentum of the anti-government movement.

While the protests have largely quieted down since the law was imposed, the opposition had been looking toward the election as a way to revive their cause. The pro-democracy camp had been hoping for big gains in the voting, following their landslide victory last fall in district elections. With many of their most prominent leaders now banned from running, their chances seem less certain.

Mr. Yeung, the lawmaker, said the government had failed to show that the election could not go ahead during the pandemic. He cited safety measures adopted by South Korea and Singapore during recent elections.

“How on earth can they convince the rest of the world, including Hong Kong people and the international community, that they have no other ulterior motives other than public health concerns?” he said.

Ms. Hui, from Notre Dame, compared Beijing’s strategy to Sun Tzu’s “The Art of War.” Beijing, she said, has exploited advantages to defeat its perceived enemies, not just with the security law in Hong Kong, but also in the South China Sea, on China’s border with India and in other contested areas.

“The harshness of the law cannot be measured by the number of arrests,” she said, “but by the deterrent effects on silencing anyone who dares to dissent.”