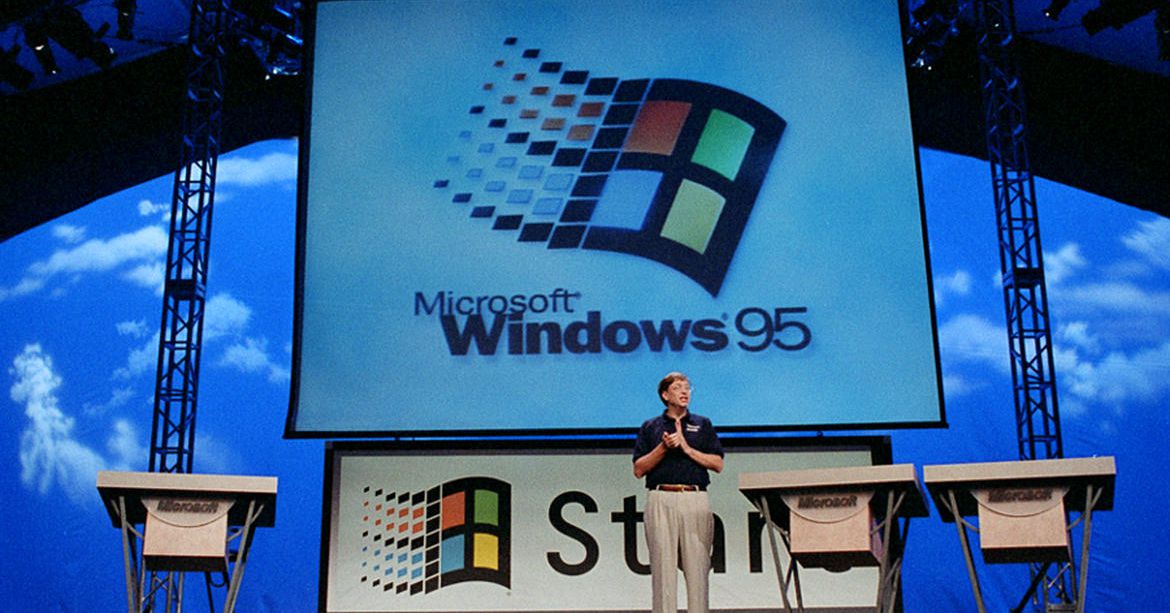 Where do you want to go today?

Twenty-five years ago today, people were lining up at CompUSA or Best Buy at midnight. It wasn’t a new Call of Duty game, Apple’s latest iPod, or any type of hardware at all that shoppers were waiting for. It was software, and not just any software: Windows 95.

Microsoft’s Windows 95 release on August 24th, 1995 was a highly anticipated launch. Jay Leno helped launch the software alongside Microsoft co-founder Bill Gates, with a lot of jokes and the appearance of the entire Windows 95 development team on stage. It was a huge day for Microsoft with TV commercials blasting the Rolling Stones’ “Start Me Up” with images of the new Start button that we still (just about) use today. Microsoft even hired Jennifer Anniston and Matthew Perry to create an hour-long cyber sitcom all about Windows 95, and the software was so popular that 7 million copies were sold during the first five weeks.

Away from all the fanfare around the launch, PC geeks were choosing between Pentium or 486 processors, IDE or SCSI hard drives, double-speed CD-ROMs, and Sound Blaster audio cards to experience the best of Windows 95. Microsoft added a lot of features to Windows 95, but the biggest was a new Start button, menu, and task bar that made it a lot easier to discover applications and navigate the operating system. Multitasking improvements and the graphical interface were a big leap from Windows 3.1 and the days of MS-DOS, but the interface was rather similar for Macintosh and OS/2 users at the time.

Windows 95 wasn’t all about the Start button, though. Besides being a 32-bit OS, an important addition was support for long filenames, up to 250 characters. It sounds like a basic feature in 2015, but at the time it made naming documents a lot easier. Another big feature was the introduction of Plug and Play, to automatically detect and install hardware. While the process of Plug and Play has been greatly improved in more recent releases, Windows 95’s implementation was often referred to as Plug and Pray thanks to the often unreliable device install process that resulted in IRQ conflicts and lots of driver fun.

Microsoft had other equally ambitious plans for Windows 95. A new Microsoft Network (MSN) application came bundled with a prominent icon on the desktop. MSN was designed to provide access to email, chat rooms, newsgroups, and the first WWW homepages through a dial-up connection. Microsoft charged a monthly fee to access MSN, and if you used it for more than three hours a month, there were extra charges. It was the early days of the internet and dial-up connections, and MSN now exists as a web service through various tailored apps or a browser.

Microsoft also introduced its first idea of syncing data between multiple machines in Windows 95. The My Briefcase aimed to sync files between a laptop and desktop machine, and in modern releases of Windows, it’s all cloud-powered thanks to Microsoft’s OneDrive storage service. Microsoft even introduced user profile support in Windows 95 to allow multiple family members to sign in and have their own separate profiles with links and applications. If you weren’t happy with all the new features of Windows 95 then you could have purchased Microsoft Plus! for Windows 95 at the time. It included the Internet Jumpstart Kit (an early version of Internet Explorer), theme support, and a number of system utilities. Subsequent updates to Windows 95 also introduced new features before Windows 98 arrived three years later to improve things even more.

Enjoy a brief look back at Windows 95 in the photos and videos below, especially Bill Gates and Steve Ballmer dancing to “Start Me Up.” It’s classic, just like Windows 95.