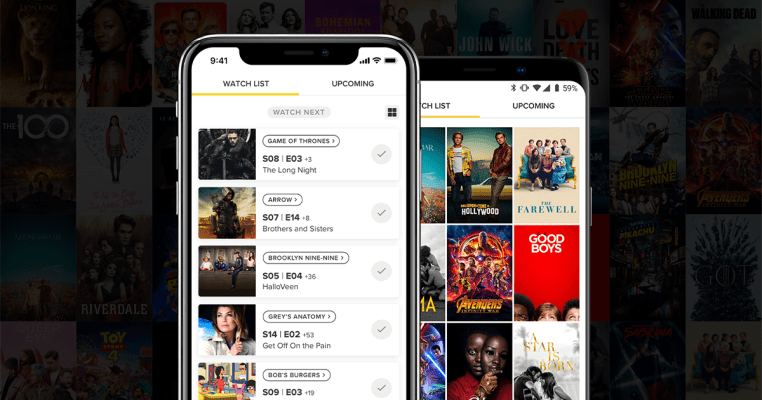 In the streaming era, data on a show’s viewership and popularity is harder to come by. It’s no longer as simple as setting up a Nielsen box to get data on a show being watched across TVs, phones, tablets and the web. One company solving this problem for content owners, broadcasters and streamers alike is Whip Media Group, parent company to the TV and movie tracking app TV Time. The company announced today it has raised $50 million in Series D funding to continue to grow its business.

Whip Media Group has a varied history. TV Time began as WhipClip, a source for a legal collection of GIFs from favorite shows. But following the company’s acquisition of French startup TVShow Time in December 2016, it pivoted to become a social TV community. The TV Time app allows users to track their favorite shows by marking episodes as watched, as well as join in the show’s community on the app where users discuss the episode; share photos, screencaps, and memes; take polls; and more. Its recommendations feature also helps users find more things to watch.

The company rebranded as Whip Media Group to reflect that it’s now home to a handful of businesses, including the TV Time app, as well as TheTVDB, an entertainment database for TV and movies and, more recently, the content value management platform, Mediamorph.

Today, the TV Time app has anywhere between 800,000 and a million active users per day. And 50% of users contribute some sort of data — for example, following a show, creating content, liking another user’s post, reviewing an episode, commenting and so on. To date, TV Time has tracked more than 15 billion episodes.

Initially, TV Time was using this data to develop a new type of ratings system for the cord-cutting era. But TV Time learned that a show’s ratings don’t matter to video-on-demand services that don’t sell advertising. Instead, what TV Time could provide was emotional data on how users responded to shows.

“By collecting [this data] we can build these models to not only say what people are watching, but also start to predict what they’re going to watch next,” says Whip Media Group CEO Richard Rosenblatt.

In addition, the engagement data can help streamers find out things they never could before — like which moment in an episode had huge spikes of user interest, i.e. “the most memed moment.” This data can help them to better market the show as well as help them think about the show’s direction for future seasons.

Now, with the acquisition of Mediamorph, Whip Media Group can also help to value content. This allows buyers and sellers to make determinations about where to sell shows and for how much.

This data is highly valuable to Whip Media Group’s clients, which include more than 50 of the biggest names in entertainment — like Disney, Warner Bros., Hulu, NBCU, Paramount, Sony, Lionsgate, BBC, HBO, AT&T, T-Mobile, Liberty Global, Discovery and United Talent Agency. (There are other large, household names in streaming that also use the company’s data, but can’t be disclosed due to NDAs.)

When a content owner sells a show to a modern-day streaming service, they often have no way of knowing how it performs.

Whip Media Group, starting at the end of Q1, will be able to start making predictions about where a particular piece of content available for sale should go, says Rosenblatt.

“We will be able to roll out, starting in the first quarter, an ‘engagement score,’ where [content owners will] actually be able to look at how one piece of content engages a certain demographic or a certain geography differently than another piece of content,” Rosenblatt explains. “If you think about how ad networks got started 20 years ago — and you were trying to match the right consumer with the right ad, and all that mattered was if they clicked. Nothing else mattered. Google won because they had the best data, the best models…that’s what we want to do,” he continues.

“We want to put the right piece of content on the right platform, in the right country, to the right demographic. And we don’t think that there’s anyone else in this position like we are — that has all of that between Mediamorph and TV Time,” he says.

This data is more important than ever in an era where core classics are selling for as much as half a billion (like the “Seinfeld” sale to Netflix or “Friends” to HBO Max) or even more (like the billion-plus-dollar deal for “Big Bang Theory,” which also went to HBO Max.)

More broadly, global online television episode and movie revenues will reach $159 billion in 2024; more than double the $68 billion recorded in 2018, according to Research and Markets.

Whip Media Group’s new round of funding is being used, in part, to help pay for the Mediamorph acquisition, which was a combination of cash and stock. But the majority is being used to grow the business, including by expanding the company’s sales and data teams and accelerating product development.

The company has already hired 20 people so far and expects to hire 50 by year-end, mostly on the data and engineering sides.

“Whip Media Group is building software and data solutions that will transform the way content is being bought and sold throughout the global entertainment ecosystem,” said Ricky Sandler, chief executive officer of Eminence Capital, in a statement. “We believe in their vision and their exceptional leadership and technology teams and are excited to partner with them as they rapidly expand their business.”