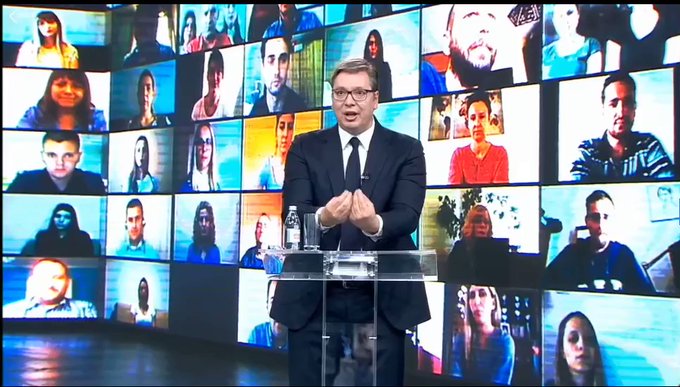 Welcome to the dystopian future of yesteryear’s futurist cyberpunk novels.

In this video, Serbian president Aleksandar Vučić holds an authoritarian rally for himself, with his political supporters clapping for him in a gigantic clusterfuck of a videoconference display.

“The President of Serbia just held a virtual rally with his supporters clapping via video stream,” tweets Sergej Dojcinovic.

The President of Serbia just held a virtual rally with his supporters clapping via video stream. Looks very dystopian and creepy.
pic.twitter.com/3O7yuvm9r2

“Twitter is completely stifling FREE SPEECH, and I, as President, will not allow it to happen!”

Facebook studied how it polarizes users, then ignored the research

• “Our algorithms exploit the human brain’s attraction to divisiveness.” • “64% of all extremist group joins are due to our recommendation tools” • GOP operative turned Facebook policy VP Joel Kaplan, who threw a party for Brett Kavanaugh upon his Supreme Court confirmation, killed any action on Facebook’s internal findings, reports WSJ

Twitter said Tuesday it’s not taking any action on grotesquely abusive tweets by impeached U.S. President Donald Trump about the 2001 death of a woman who once worked as a congressional staff member for Joe Scarborough, after her husband asked the company to remove the false and personally harassing tweets.

Just as in almost any industry that seeks high-demand, well-trained workers, certification often becomes key. For project managers, that means anyone who’s serious about serving in that role with a respected company knows they’re going to need the seal of approval in one of the field’s most recognized methodologies before they stand much of a […]

Popping a new battery in a smoke detector or adding salt to your water softener are easy fixes. But if you run into trouble or a necessary repair in a cramped, tight place, sometimes with no obvious fix or easy access, it can be a pretty frustrating exercise. Since flying blind is the absolute worst, […]

Would a little spiritual or literary motivation help you start your day? Quotely’s got your back

Firing up the engines each morning and attacking the day with gusto and purpose can feel like a mighty tall order sometimes. We’ve all been there. But on those sluggish, why-don’t-I-just-stay-here-in-bed-all-day kinda days, it might just take a rational, calming, reassuring nudge to make it happen.  No matter what it takes to keep you motivated […]