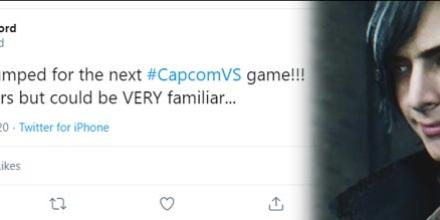 Brian Hanford, also known as V’s voice actor from Devil May Cry 5, made a rather unusual Tweet earlier today. It appears to be a blatant hint at the existence of an upcoming Capcom versus game.

“Absolutely pumped for the next #CapcomVS game,” stated Hanford. “New characters but could be VERY familiar…”

The term “CapcomVS” is likely referring to a crossover fighting game. Something akin to Marvel vs. Capcom or SNK vs. Capcom.

Notably, Capcom’s last versus title, Marvel vs. Capcom: Infinite, did not meet expectations. Since its release back in September 2017, only about 1.4 million units have been sold.

Despite this flop, fans have been eager to see Capcom return to this series. In particular, many are hopeful that Capcom will be returning to the 3v3 formula on the next attempt.

Much to everyone’s surprise, a Marvel vs. Capcom 2 eight player invitational was recently announced to be one of the main stage events for EVO 2020. This is obviously in celebration of the game’s 20 year anniversary. Is it possible that there’s an announcement awaiting fans during the unfolding of this tournament?

Although Brian Hanford’s comments on Twitter are extremely interesting, they are in no way a confirmation that a new Capcom versus title is in the works. Still, this does seem to give the implication that V might be a playable character if this voice actor is actually in the know.

Until an official announcement is made by Capcom, this should be treated like any other rumor. Please take this information with a grain of salt.

Sent in by an anonymous reader.