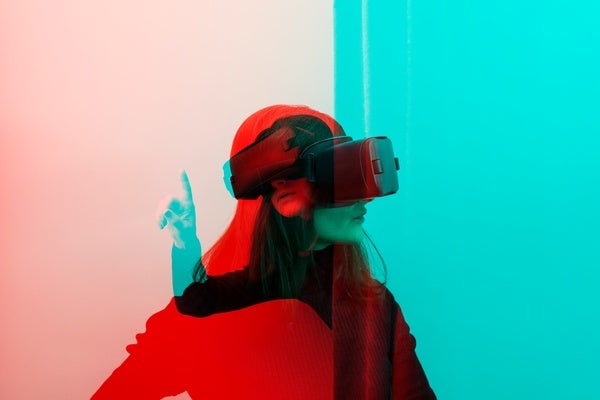 Sensorama, which looked like a vintage arcade game and required the user to walk up and stick one’s head into a box to get the effect of being part of the film that played inside. The once-clunky hardware for VR has gotten much smaller and cheaper over the past several decades, and the content has gotten more varied and accessible, opening up the experience to people outside the realms of wacky invention and cutting-edge gaming. It’s possible, now, to don several pounds of gear for a full-body, full-room experience—or to slip your smartphone into a cardboard box tricked out by Google and enter a virtual world from your living room. That is, if you can lift the equipment and move around in the way the hardware and content requires.

VR is often touted as a democratizing way to access new worlds and experiences. Indeed, it’s increasingly being used in health care, education and the workplace for everything from diversity and inclusion initiatives to virtual trips to distraction during unpleasant medical procedures. But in terms of accessibility, VR still has a long way to go.

Last summer, while working on an article about the use of VR in the treatment of conditions like post-traumatic stress disorder and anxiety, a woman I interviewed told me that after struggling for years with gender dysphoria, the experience of putting on a headset and inhabiting not just another place, but another body of a sort, led instead to a sense of “gender euphoria.” It was, paradoxically, the first time she said she had really felt like herself. Toward the end of our conversation, she mentioned that a lot of her peers seemed to choose different genders and races for their virtual avatars, surmising that many found comfort in adding another layer of separation between their “real world body” and their virtual one, whatever their identity. As we chatted about how much the technology has evolved, she sounded a note of disappointment: that a family member with muscular dystrophy still couldn’t use VR.

Many of those with limited mobility can’t experience VR without assistance, and even with a headset on, many can’t make the head or body movements necessary to get the full experience. The problem isn’t limited to those with physical impairments; conditions like autism and anxiety can also make using VR difficult or even harmful. Ironically, my source told me the only game her family member could play was The Climb, available on the Oculus, in which the player virtually climbs different kinds of walls and other obstacles. The game was compatible with the remote NextBox controller and didn’t require users to raise their arms above their heads to play.

In 2017, Alice Wong, a disability activist and founder of the Disability Visibility Project, found in research conducted in partnership with Lucasfilm’s immersive entertainment studio that people with a variety of disabilities, from blindness to cerebral palsy to autism, enjoy using VR and believe it could be beneficial, but experience major accessibility issues. The inability to customize experience and the necessity of moving certain parts of the body were two of the biggest issues raised by survey respondents.

One blind respondent noted that VR was not compatible with the assistive technology that person used, and that the audio information conveyed by most VR content was not enough to fill in for the visual cues that seeing users experienced. Several explained that anything that required the use of more than one controller—as many room-scale experiences do—was out of the question because of challenges with motor skills or lack of two typically functioning hands or arms.

VR is touted as an “empathy machine” for people who want to get a sense of what it’s like to be someone else. This includes simulations of conditions such as macular degeneration, dementia and those that affect mobility. There is evidence that these experiences do build empathy, but that rings hollow without action that actually includes people with disabilities in the use of VR.

There has been some progress in this direction over the past several years. In 2017, Samsung released a visual aid device called Relúmĭno that works as a mobile app within the Gear VR device to help correct distorted images for some users with low vision. More recently, Microsoft has published a research tool kit for developers who can use the tools in Unity to make VR more accessible to those with vision impairments, and also developed the Canetroller to help people with low vision navigate VR environments. Low vision isn’t the only potential barrier to using VR, and these experiments are hardly quick fixes. Oculus seems to be one of the most accessible, especially with the recent addition of controller-free hand-tracking, which could help some users who have trouble holding controllers.

To be fair, VR technology is changing quickly, and keeping up is a challenge. But any excuse that widespread VR is still mostly a pipe dream no longer holds water: in 2018, 41% of adults surveyed told Yulio Technologies that they would try VR if given the chance, and 84% of parents surveyed told Common Sense Media that they believe VR offers educational experiences for their kids. The industry is expected to reach $40 billion this year.

To really show empathy—and, frankly, good business sense—VR developers should listen to the concerns of those in the disability community, and better yet, invite them to help create the products they want and need.

The views expressed are those of the author(s) and are not necessarily those of Scientific American.

Kaitlin Ugolik Phillips is a journalist and editor who lives in Durham, North Carolina. She writes a blog about empathy featuring reportage, essays, and interviews, and is the author of THE FUTURE OF FEELING: Building Empathy in a Tech-Obsessed World (Little A: February 1, 2020).