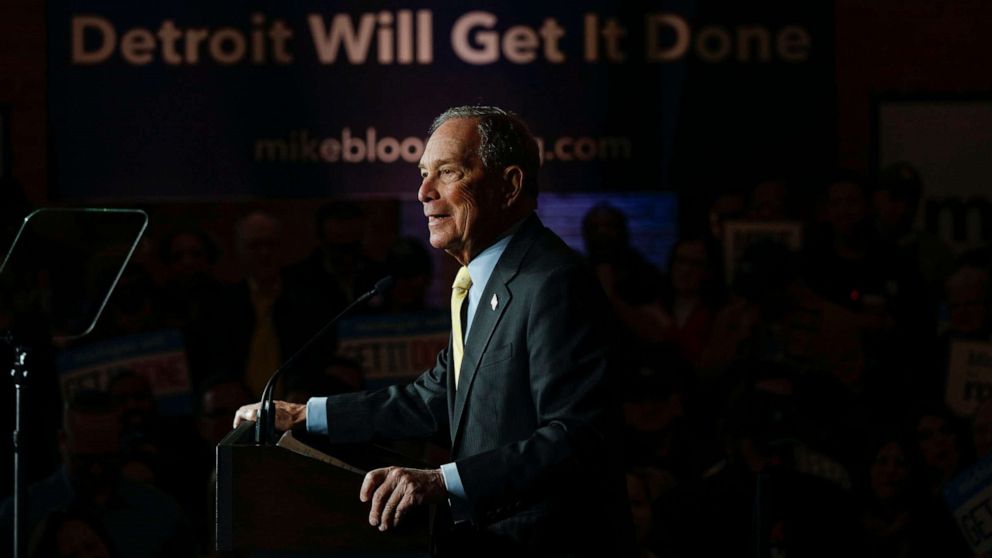 In his ongoing bid for the White House, Mike Bloomberg has sought to overcome a controversial record of supporting policing tactics that overwhelmingly harmed communities of color in New York City during his time as mayor.

But those efforts hit a snag Monday night when a series of video and audio clips of the former mayor making controversial remarks about criminal justice emerged on social media — less than a day after a new poll showed him gaining traction with African American voters.

The clips are shining a new light on Bloomberg’s record with policies that, in many cases, disproportionately impacted African Americans and Latinos. Since launching his presidential bid in late November, Bloomberg has repeatedly apologized for some of those policies and walked back comments he made at the time.

But the videos that circulated online this week — one taken as recently as 2015 — tell a different story.

“Ninety-five percent of your murders, murderers and murder victims fit one M.O.,” Bloomberg is heard saying in one audio clip, reportedly recorded during a 2015 speech at the Aspen Institute. “You can just take the description, Xerox it and pass it out to all the cops. They are male, minorities, 16 to 25. That’s true in New York, that’s true in virtually every city. And that’s where the real crime is.”

In another recording of unknown origin, Bloomberg is heard saying, “the way you get the guns out of the kids’ hands is to throw them up against the walls and frisk them.”

According to the Aspen Times, Bloomberg later attempted to block footage of his 2015 Aspen Institute speech from being made public.

One critic called the remarks “devoid of humanity,” but was not surprised to hear the words come out of Bloomberg’s mouth.

“The most important part for me is the callousness with which he did it — and the pride. You can hear the lack of humanity,” said New York City Public Advocate Jumaane Williams, who supports Bernie Sanders for president. “When thinking about the impact of the [“stop-and-frisk”] policy, you know you’re ‘thrown up against the wall,’ you know, ‘Xerox it and give it out to police.’ It was devoid of humanity in discussing what the impact truly is.”

The resurfacing of those audio clips comes on the heels of a new poll that shows Bloomberg cutting into Joe Biden’s support among African American voters — a demographic the former vice president has relied on to form the backbone of his constituency.

A nationwide Quinnipiac poll released Monday shows Bloomberg with 22% support from African Americans — a 15-point boost from the same polling outfit two weeks earlier — and within striking distance of Biden’s 27% support, down more than 20 points since late January.

The new poll reflects a sea change in the Democratic nomination landscape after Biden, widely considered the frontrunner and leading moderate in the race, faltered in Iowa last week. With Biden’s campaign facing new challenges center and some moderate voters may turn to Bloomberg, despite his troublesome record on issues relevant to communities of color.

A longtime Democrat, Bloomberg campaigned for and served as mayor of New York as a Republican. Stop-and-frisk policing earned Bloomberg reprimands at the time from the city’s liberal and minority activist groups.

Now running for president as a Democrat, Bloomberg has taken steps to atone for some of his past policies — most notably the stop-and frisk-policing strategy that critics have said disproportionately impacted black and Latino people.

In November, Bloomberg visited a church in Mississippi, where he told congregants, “I now see that we could and should have acted sooner — and acted faster to cut the stops. I wish we had, I’m sorry that we didn’t.”
During an appearance on ABC’s “The View” in January, Bloomberg was pressed about why he waited until his presidential bid to apologize for his support for stop-and-frisk. “I apologized when enough people said to me, ‘you were wrong.’ And I thought about it and I wish I had done it earlier — I just didn’t,” he responded.

Williams says he believes the apologies are simply a campaign strategy. “Where was this when he was here for twelve years? It sounds like an apology and a plan of convenience,” he said.

Bloomberg may regret his policy decisions now, but the effects of those policies continue to impact communities of color — in large part due to the sheer volume of arrests made over the course of his time in City Hall.

New York police officers made approximately 440,000 arrests for low-level marijuana possession during Bloomberg’s 12-year tenure in office, according to the Drug Policy Alliance, a New York-based non-profit. That figure is higher than the total number of arrests under the three previous mayors of New York City combined. Research conducted by professors at CUNY-Queens College shows nearly 90% of those arrests targeted black or Latino people.

Bloomberg’s stop-and-frisk rule took advantage of laws already on the books in New York. In 1977, state lawmakers passed legislation decriminalizing small marijuana possession by passing a bill that made carrying less than 25 grams of marijuana a minor violation punishable by a ticket and a fine up to $100 — as long as the drug was not in public view.

The Bloomberg-era stop-and-frisk policy allowed officers use the “public view” rule against suspects by searching them or ordering them to empty their pockets. Those found to have small amounts of marijuana on them were often arrested and charged with an elevated crime punishable by up to three months imprisonment and a fine of up to $500.

After a lengthy record of supporting the policy that led to record marijuana arrests in New York as mayor, Bloomberg’s public position on marijuana has shifted since entering the 2020 race. At an event in Denver, Colorado, on Feb. 1, Bloomberg was asked to follow up on a comment he made last year about marijuana legalization being “perhaps the stupidest thing anybody has ever done.”

Bloomberg responded, “Colorado has a right to do what they want to do. What I really object to is putting people in jail for marijuana. That’s really dumb.”

In a statement released Tuesday in response to the video and audio clips, Bloomberg reiterated his apology for failing to address the impact of stop-and-frisk on minorities.

“I inherited the police practice of stop-and-frisk, and as part of our effort to stop gun violence it was overused,” the statement read. “By the time I left office, I cut it back by 95%, but I should’ve done it faster and sooner. I regret that and I have apologized — and I have taken responsibility for taking too long to understand the impact it had on Black and Latino communities.”

In his effort to win over black voters in 2020, Bloomberg has done more than just apologize. A major element of his strategy to broaden his appeal has been to gain endorsements from high-profile African American politicians, including the mayors of major U.S. cities.

A January Washington Post/Ipsos poll showed black voters had mixed feelings about the apologies. And Bloomberg has not made any formal apologies to Latino communities. “Questions about mass incarceration, criminal justice, and restorative justice are at the forefront of voters’ minds, even though they may not show up as the very first thing on polling,” said Leah Wright Rigueur, author and assistant professor of public policy at Harvard University’s Kennedy School of Government.

According to CityLab,a Bloomberg LP-owned entity, Bloomberg has scored more endorsements from mayors of the largest 100 cities in the country than any other candidate, one of whom is Mayor London Breed, the first black woman to lead San Francisco’s City Hall. During an interview with NPR this week, Breed cited Bloomberg’s apologies as justification for her support.

“I think that unfortunately it occurred, and there isn’t a politician alive that hasn’t made a mistake, and their policy sometimes has led to a situation like this that has negatively impacted the African American community,” Breed said. “I think that he realizes the mistake of the past, and his goal is to look at a way in which we can correct that mistake along with a number of other issues.”

Bloomberg’s political opponents wasted no time on Tuesday promoting the video and audio excerpts. The Republican National Committee blasted out the clips to reporters. Donald Trump Jr. and Brad Parscale, the Trump 2020 campaign manager, tweeted out the clips Tuesday morning.

President Trump himself tweeted out one of the videos Tuesday morning before deleting it. For his part, President Trump has supported stop-and-frisk policies in the past, stating publicly as recently as October 2018 that the policy “works.”

“It’s got to be properly applied, but stop-and-frisk works,” Trump said.

The Bloomberg campaign called the president’s tweet “the latest example of his endless efforts to divide Americans.”