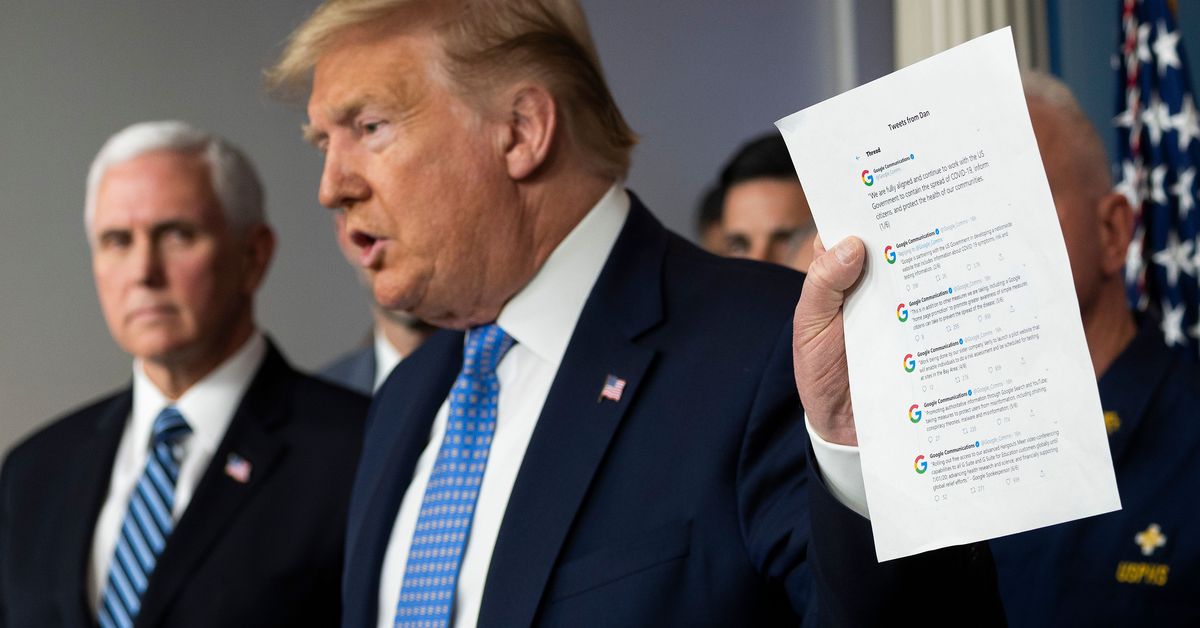 Google’s sister company Verily has launched a screening website for people who want to get tested for COVID-19. However, Verily’s website is very limited in scope: it’s only available to people in the Bay Area of California and it’s more of a pilot program than a public health utility.

In fact, it’s even more limited than that: in order to qualify you must be 18 years of age or older, be able to speak English, and be a US resident. It very much looks like the program a Verily spokesperson described to us on the phone on Friday and not the expansive triage system that the Trump administration promised.

The initial question on Verily’s site asks “Are you currently experiencing severe cough, shortness of breath, fever, or other concerning symptoms?” If you answer “yes,” you are told that the program is “not the right fit” and to seek medical attention. Reached for comment on this issue, a Verily spokesperson said that:

This screener was developed in partnership with government health officials. The initial question is meant to ensure that anyone who is seriously ill does not come to our sites because they are not prepared to provide medical attention. We are early in this pilot and are going to be learning more that will help us refine this COVID-9 risk screening and testing.

If you answer “no,” you’re asked to sign in with a Google account and sign an Informed Consent authorization form. It details that your data may be shared with public health officials.

After that, you are led through a series of screener questions about your symptoms:

The actual screener asks questions about travel and work responsibilities. And it re-asks questions specifically about each symptom. There’s a few more additional questions but it took about 3 mins to read and respond. pic.twitter.com/t0M8GzIP4l

Ultimately, our goal is to help local authorities expand testing access in California as the need continues to increase. The program is in its early stages, and we will take the time to assess operations at pilot sites in the Bay Area before rolling out to additional sites. We are working closely with Governor Newsom’s office, federal authorities and local public health authorities to ensure we have the right capabilities in place to help more people over the coming weeks.

Verily’s site is located at Project Baseline, which to date has only been used to connect people up with potential clinical trials. That infrastructure for collecting and protecting health data was one of the reasons that Verily’s screening site was put on Project Baseline. The site also claims that any information you provide won’t be shared with your insurance company or connected to your Google account — though a Google account is necessary to use the site.

The website launched after a weekend of confused and inaccurate statements from the White House about a website it claimed Google is building. Google had not expected to be mentioned in Friday’s press conference, according to Wired. And so it initially had not planned to build such a site, Axios reported, but began to scramble after Trump’s statements. Over the course of the weekend, Google itself did not correct the record but instead issued a series of tweets pointing to Verily’s sites and to its own efforts to provide information on the coronavirus.

Earlier on Sunday, President Trump held up a printout of those tweets from the Google Comms account and claimed that they “substantiated” his original statements on Friday. Google’s tweets did not, but they also carefully avoided directly contradicting the president. Google itself has not announced a screening website for COVID-19.

Google has instead said it will launch an informational website, according to this post from CEO Sundar Pichai:

This includes best practices on prevention, links to authoritative information from the World Health Organization (WHO) and the Centers for Disease Control (CDC), and helpful tips and tools from Google for individuals, teachers and businesses. We’ll be rolling out an initial version of the website late Monday, March 16, and we’ll continue to enhance and update it with more resources on an ongoing basis.

That more comprehensive site may yet come, as Vice President Mike Pence again promised in Sunday’s press conference that such a site could be made, and he made a point to say that the administration was also working with other tech companies. It is not clear what that work looks like, or if those tech companies were approached before the scramble over the weekend.

What’s clear right now is that Verily’s website as it currently exists is a pilot program limited in scope and availability. What’s even clearer is that the administration has not yet provided full details to US citizens on when and how they will be able to gain access to a coronavirus test, though it is clearly rushing to find a way to do so.