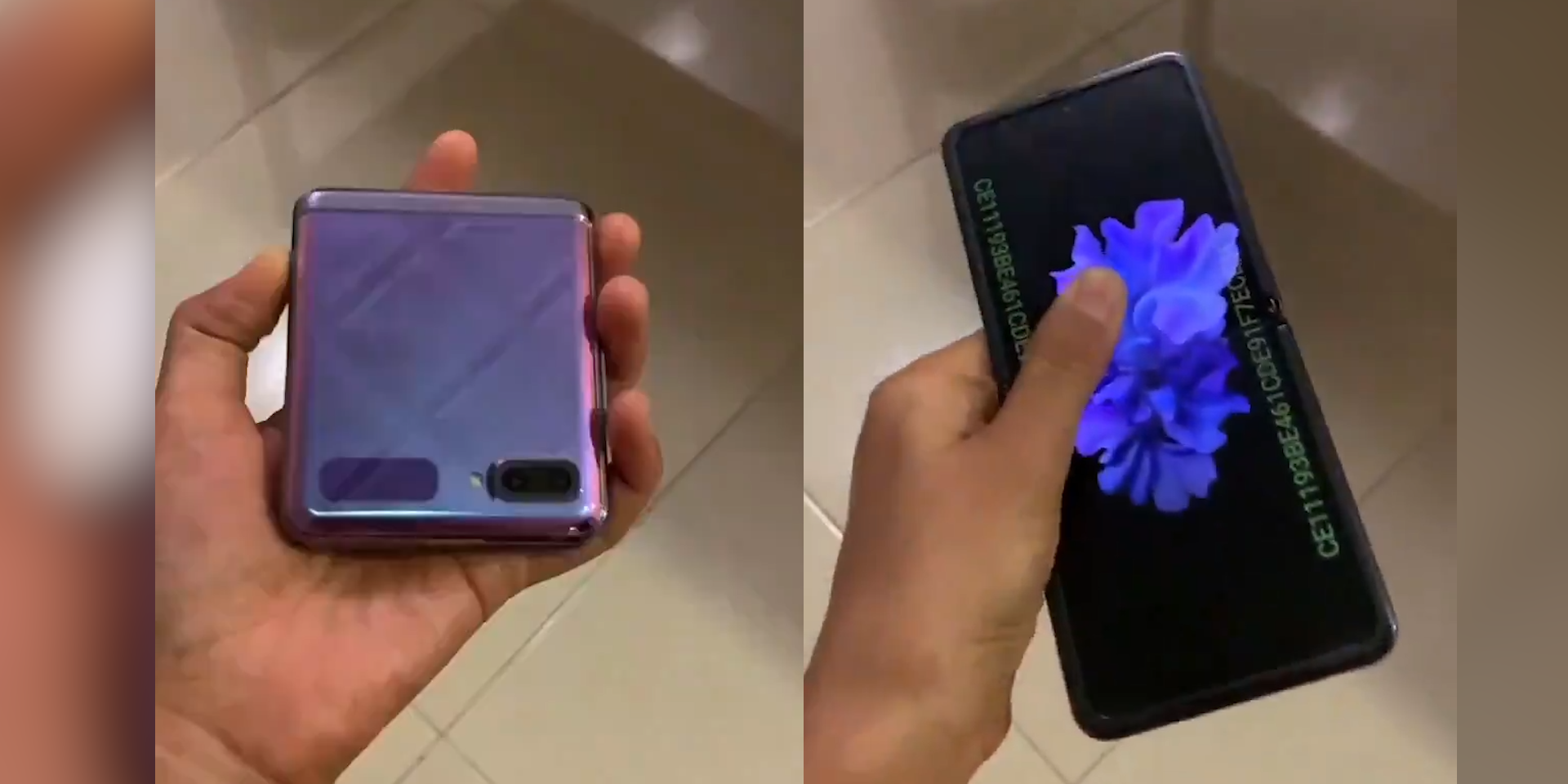 Try as they might, Samsung has struggled to keep a lid on the leaks of its upcoming second-generation foldable, as now the Galaxy Z Flip has leaked in the first hands-on video.

While we are excited to get up close and personal with the second generation folding clamshell design, the leaked video answers a few questions as to just how Samsung has achieved this unique form factor.

Initially posted on Twitter by @BenGeskin but originally appeared courtesy of Yunis Ali (@silverarow) — who themselves appears to have taken the clip from an unknown Instagram account. There is quite a thick plotline as to where this video has surfaced from. Despite that, you can clearly see that the device is heavily watermarked and has a small, boxy design looks to be a little more refined than last years Samsung Galaxy Fold.

[Update 02/08]: Strap yourselves in, as another video has leaked showcasing the Galaxy Z Flip again — this time in black. It was posted to Chinese networking site Weibo but it’s unclear if this is the original or not. However, it shows the unfolding process a little slower than we’ve previously seen already, giving us a glimpse of the back seam that protects the folding mechanism.

Engadget was also sent stills of the device, which showcases just how tall it will be when unfolded fully. We already knew it would be tall and slender but seeing the Z Flip fully unfolded puts into perspective just how tall this phone will actually be. Check out the hands-on images below.

[Update 02/07]: The Galaxy Z Flip has appeared on camera yet again, this time via an Instagram story — then uploaded to YouTube. It is inside a protective “leak-proof” cover for that added “stealth” but if you listen carefully, you can hear some bargaining in what is likely a carrier store — which we believe could be T-Mobile by the carrier logo displayed in the upper left of the folding display.

The 20-second clip doesn’t show us a great deal more than we’ve already seen but it’s yet another glimpse of the device before the official unveiling in just under a week. We’ve already covered just about everything we know about the second-generation foldable — but we expect to learn heaps more at the official launch event.

The 19-second hands-on clip showcases the actual folding process and gives off real Gameboy Advance SP vibes. When opened we get a look at the large inner screen, while there’s even a quick glimpse at the small outer AMOLED display that showcases the time and shows other key device information.

Launching alongside the Galaxy S20 series later this month, we already know quite a substantial amount about the Galaxy Z Flip prior to this hands-on video leaking. We are expecting a Snapdragon 855+, at least 8GB of RAM, and 256GB of storage. There’s no outright confirmation of these specifications within the ultra-short clip though.

The 22:9 aspect ratio ensures that when unfolded, the Galaxy Z Flip will be a tall design but without really sacrificing space. We don’t get to see the latch at 70 and 110-degrees that has been touted but just seeing the display unfolding and working as normal is probably enough for most.

On closer inspection, it does look as though there will be a visible crease but given that this folds completely shut, that was to be expected We’re definitely interested to see just how the ultra-then glass feels under the thumb when compared to the Galaxy Fold — which had a very plastic-like feel under your finger.

We don’t have much longer to wait to see just what else the Galaxy Z Flip brings to the table, but this hands-on video does whet the appetite quite substantially. What do you think of the second-generation Samsung foldable? Let us know down in the comments section below.