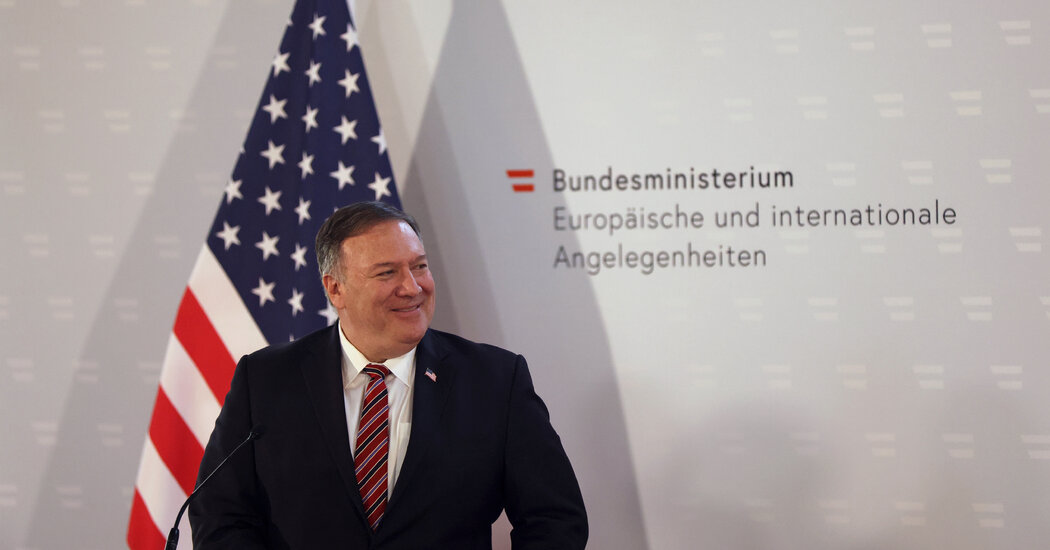 The United States suffered an embarrassing diplomatic defeat on Friday when the United Nations Security Council rejected a proposal to indefinitely extend an arms embargo on Iran, with even America’s strongest allies refusing to buckle under pressure from the Trump administration to take a harder line.

The defeat underscored America’s deepening global isolation on the issue of Iran. But for the Trump administration, the vote could open a separate path to try to inflict maximum damage on Iran ahead of November’s U.S. presidential election.

For months, Trump administration officials have warned that if the vote to extend the embargo failed, the United States would try to invoke a provision built into the Obama-era nuclear accord to punish any Iranian violations by reimposing all sanctions lifted when the deal took effect. That could include the prohibition of not just arms deals, but also oil sales and banking agreements. In theory, all U.N. members would have to adhere to the sanctions.

The provision, known as a snapback, would be devastating for Iran, which is already struggling with a moribund economy made worse by the coronavirus. Pursuing the snapback would also put the Trump administration at odds with America’s allies, which vehemently oppose it as legally dubious and potentially destabilizing to the region.

“The United States has every right to initiate snapback,” Kelly Craft, the U.S. ambassador to the United Nations, said Friday night. “In the coming days, the United States will follow through on that promise to stop at nothing to extend the arms embargo.”

That could include trying to enforce the snapback sanctions unilaterally, without the support of allies.

Secretary of State Mike Pompeo denounced the Security Council’s decision to scuttle the embargo provision, describing it Friday evening as “inexcusable.” While he did not say specifically that the United States would pursue the snapback option, he made clear that the Trump administration had not given up on the issue of Iranian weapons.

“We will continue to work to ensure that the theocratic terror regime does not have the freedom to purchase and sell weapons that threaten the heart of Europe, the Middle East and beyond,” Mr. Pompeo said.

While Friday’s vote was about the duration of the arms embargo, the heart of the dispute between the United States and its opponents on the Security Council is the nuclear deal.

Signed in 2015, the deal freed up the Iranian economy by lifting sanctions in exchange for Iran agreeing to halt its nuclear program. The deal was President Obama’s signature diplomatic achievement, and was backed by some of America’s closest allies, Britain, France and Germany, as well as its strongest foes, China and Russia.

President Trump came into office vowing to dismantle the deal, insisting he could get a better one. But when he finally withdrew the United States from the accord in 2018, it touched off a diplomatic conflagration that has at times escalated toward war.

Since then, Iran has exceeded nuclear enrichment limits set by the accord and launched covert attacks on American military targets, while the United States has assassinated Iranian military leaders and proxies, including Qasem Soleimani, the leader of Iran’s revolutionary guards.

The arms embargo was designed to prevent Iran from buying and selling weapons, including aircraft and tanks. It was due to expire in October, at which point Iran would legally be able to begin replenishing its arms stockpiles, something the Trump administration has said it would not permit.

But Mr. Pompeo’s was a lonely voice in support of the measure, which had been put forth by the United States.

In explaining their decision to abstain from the vote on Friday, America’s European allies insisted that they, too, worried about an Iran with free access to dangerous weapons and expressed hope for further negotiations on possible restrictions.

But the American proposal to extend the embargo indefinitely, they said, would never have passed the Security Council because of the threat of a veto by Russia and China.

The proposal would have needed nine yes votes, and no vetoes from the five permanent members, to pass.

“It would therefore not contribute to improving security and stability in the region,” Jonathan Allen, Britain’s permanent representative to the United Nations, said in a statement after the results were announced.

Moreover, critics of the United States position question whether the Trump administration, having withdrawn from the nuclear accord, has legal standing in any debate over its provisions — including the arms embargo and snapback. Having failed to live up to its end of the agreement, these critics say, the Trump administration cannot insist on having a say over whether Iran is remaining faithful to the deal.

The State Department is prepared to argue that the United States remains a “participant state” in the nuclear accord that Mr. Trump renounced — but only for the purposes of invoking the snapback.

In defending its pursuit of the embargo, Trump administration officials have argued that Iran has been violating the arms restrictions laid out in the 2015 nuclear agreement.

Western intelligence agencies along with U.N. officials have determined that missiles used in an attack on a Saudi Arabian oil facility last year were manufactured in Iran, as were weapons intercepted by the U.S. Navy that were bound for Iran’s Houthi allies in Yemen. Iran has dismissed the allegations.

Though Iran initially adhered to the terms of the agreement following the U.S. withdrawal, its leaders have more recently signaled their displeasure by departing from key provisions, including limits on uranium enrichment and the stockpiling of nuclear fuel.

In a lengthy essay published this week on the website Medium, Mr. Zarif wrote that the international community faced an important decision: “Do we maintain respect for the rule of law, or do we return to the law of the jungle?”

In a sign of the high diplomatic stakes surrounding Friday’s vote, President Vladimir V. Putin of Russia weighed in beforehand, calling for a special video summit aimed at preventing “confrontation and escalation of the situation in the Security Council.”

The proposed summit, Mr. Putin said in a statement, should consist of the leaders of Security Council member states, plus the heads of Germany and Iran, and seek to establish a “comprehensive security architecture in the Persian Gulf.”

“No one should resort to blackmail or dictate in this region,” Mr. Putin said.

Judging from the statements of Mr. Pompeo and Ms. Craft, the United States has little patience for continued debate over the embargo. Rather, Friday’s vote could be seen more as a diplomatic formality the Trump administration felt it had to undertake as part of a broader effort to achieve its ultimate goal: killing the nuclear deal once and for all.

“The objective is to bury the deal and pressure the Iranians,” said Robert Malley, president of International Crisis Group and a former coordinator for the Middle East and Persian Gulf region in the Obama administration.