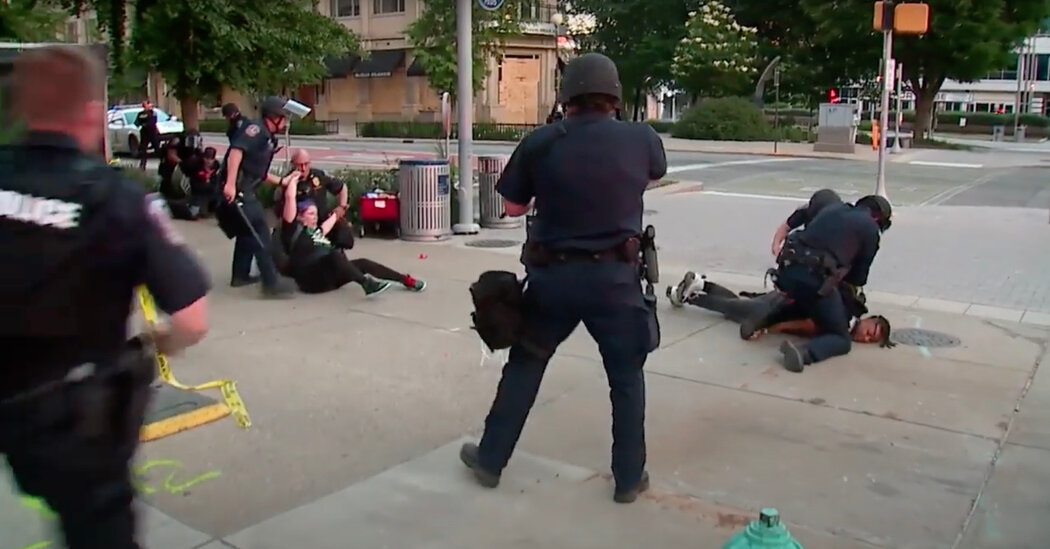 Two Indianapolis police officers have been charged with assaulting two women at a protest, the authorities said Wednesday, the latest officers to face criminal charges that they used excessive force against protesters demanding an end to police violence.

The officers, Jonathan Horlock and Nathaniel Schauwecker, were indicted after videos showed officers repeatedly striking one woman with their batons and shoving another to the ground on May 31 in downtown Indianapolis, the authorities said.

At the time, global demonstrations had erupted after the killing of George Floyd in Minneapolis police custody, and Indianapolis had been placed under an 8 p.m. curfew.

The victims were identified by Ryan Mears, the prosecutor for Marion County, Ind., as Ivoré Westfield and Rachel Harding.

Ms. Harding had been demonstrating with hundreds of others in Indianapolis, and Ms. Westfield had been photographing the protesters, according to a federal lawsuit the two women have filed against four officers, including Officers Horlock and Schauwecker.

At about 8:45 p.m., Ms. Harding agreed to drive Ms. Westfield home, and the two were walking to Ms. Harding’s vehicle when multiple officers approached them and told them they were under arrest in violation of curfew, the lawsuit stated.

Videos of the episode, captured by local television crews, showed two officers repeatedly striking a woman with batons while another officer fires what appears to be pepper balls at her after she twists free of an officer holding her from behind. When a second woman yells, “Why her?” an officer pushes that woman in the chest, causing her to fall backward onto the ground, the videos showed.

Ms. Westfield, who had been struck with batons, experienced severe swelling and bruising on her legs and pelvic area as well as welts on her skin from the pepper balls, the lawsuit stated.

Officer Horlock, 29, was charged with battery, battery resulting in moderate injury, battery resulting in bodily injury, perjury, obstruction of justice and official misconduct, Mr. Mears said. The obstruction of justice charge relates to a statement that Officer Horlock made in a probable cause affidavit, in which he falsely claimed that Ms. Westfield had hit a police sergeant in the chest with her hands, according to the grand jury indictment.

“It goes back to the issue of reasonableness,” Mr. Mears said at a news conference on Wednesday. “What would a reasonable officer, under the circumstances — what should they have done?”

Terrance Kinnard, a lawyer for Ms. Harding and Ms. Westfield, said his clients were “very pleased with the effort, resolve and diligence” shown by Mr. Mears.

“He and his staff responded to this matter with the utmost respect and regard, not only for Ms. Westfield and Ms. Harding, but also our community,” Mr. Kinnard said in a statement. “We also thank the grand jury for their time, attention and diligence, especially in light of the current environment of a worldwide pandemic.”

John F. Kautzman, a lawyer for Officers Horlock and Schauwecker, said he had no immediate comment.

The Indianapolis police officers’ union said in a statement on Wednesday that it looked forward to a “full, fair and public airing of all of the facts and circumstances surrounding the events in question.”

“While officers prefer to avoid any use of force, we fully recognize the requirement to safely and swiftly effectuate the lawful arrest of individuals when called upon to do so, especially during tense and rapidly evolving events,” the Indianapolis Fraternal Order of Police said in the statement.

Chief Randal Taylor of the Indianapolis Metropolitan Police Department said the officers had been placed on paid administrative duty “with no police authority.”

“I hold great respect for our criminal justice system and have faith that this process will deliver a just outcome,” Chief Taylor said in a statement. “While our internal investigation will continue, it is my intention to address our administrative review of the officer conduct at the conclusion of the ongoing criminal prosecution.”

The charges were the latest to be brought against officers accused of using excessive force against protesters calling for change after the killing of Mr. Floyd.

In June, a New York police officer, Vincent D’Andraia, 28, was arrested and charged with misdemeanor assault after Dounya Zayer, 20, was injured at a protest against police brutality in Brooklyn. A cellphone video showed an officer shoving Ms. Zayer onto the pavement, where she rolled onto her side while clutching the back of her head. She was hospitalized with a concussion as a result of the encounter.

Last month, a Philadelphia police officer, Richard Paul Nicoletti, was charged with three counts of simple assault and other crimes after video evidence and witness statements depicted an officer assaulting three peaceful protesters with pepper spray during a Black Lives Matter demonstration, according to the Philadelphia district attorney.

Mr. Mears, the Marion County prosecutor, said Wednesday that there needed to be a “better system” for victims to report police misconduct.

“If you feel like you’ve been a victim of excessive force, the only recourse that you have is to complain to the very agency that initiated the force,” he said. “And so I would like to think that there’s a better system set up where we’re in a position to independently have someone independently evaluate those claims and hopefully that’ll make people more willing to come forward and provide information.”