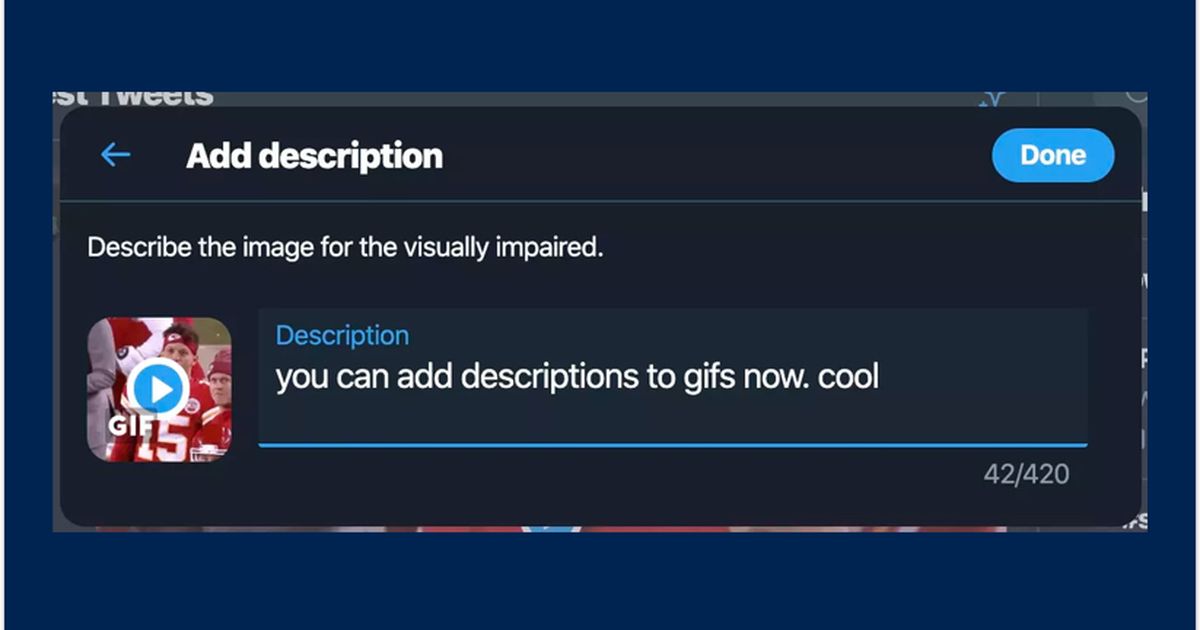 It may not be an edit button (nor will it ever be), but Twitter snuck in a nifty little feature for us to play with heading into the weekend of the Super Bowl.

If you’ve ever looked at Twitter while sports were happening, you’ve probably seen countless GIFs posted as reactions to big plays. Twitter made that slightly more accessible on Friday, adding the ability to add text descriptions to GIFs. It’s an extension of the same feature that has existed for still images for a while.

There are a couple small caveats to this. First, it’s only available on web Twitter right now. The Twitter Accessibility account confirmed in the replies to the above tweet that it’s coming to Android and iOS soon, but there’s no firm date for that yet. If you want to do this, you better open up that laptop.

Second, you can’t add text descriptions to GIFs or any other images without digging into the settings menu and flipping a switch. Go into the settings page on the Twitter website and, under “Accessibility,” you’ll find an option labeled “Compose image descriptions.” That’s off by default for some reason, so go ahead and turn it on.

Once you’ve gone ahead and done that, you can start describing GIFs to your heart’s content. Just compose a tweet like you normally would, choose a GIF, and then click the prompt to add a description underneath the GIF. It looks a little something like this:

This might not seem like a massive upgrade for Twitter, but that doesn’t make it less important. These descriptions can help people with vision impairment have a better time on Twitter, and it didn’t make much sense to relegate them strictly to still photos.

If Twitter plans to be as GIF-heavy as it’s been since adding GIF search, accessibility features like this are going to be necessary.