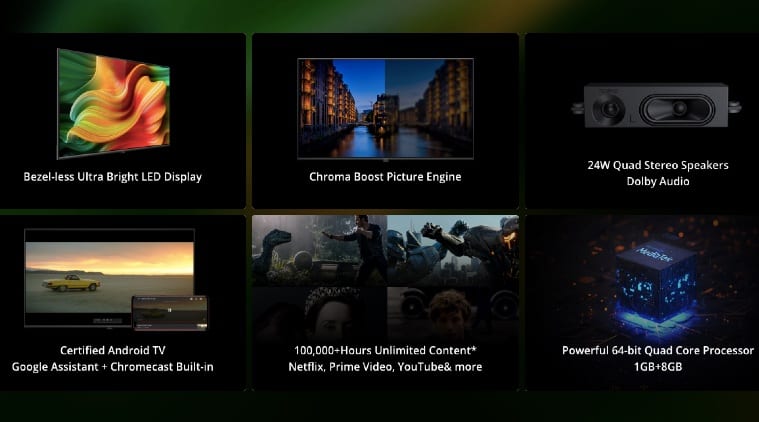 We are listing down the top five 32-inch smart TVs that are available under Rs 15,000. (Image: Realme)

India’s smart TV market is seen as a big market for smartphone makers. Last year, not only did old brands like Aiwa made their come back to the smart television market but also brands like Nokia and Motorola entered the segment with their smart TV offerings.

While OnePlus also has TVs with its brand name, Realme recently launched the Realme smart TV. Xiaomi has a number of offerings in the TV segment and the OEM Videotex is also present in the Indian television market with three brands– Daiwa, Telefunken, and Shinco.

Realme just forayed into the television business with the launch of its first smart TV. The company announced two models, out of which the 32-inch model is priced at Rs 12,999. The Realme Smart TV comes with 1366×768 pixels screen resolution (HD Ready) and runs AndroidTV 9 software. Other specifications of the TV include a quad-core MediaTek processor, 1GB RAM, 8GB internal storage, Dolby Audio certified 24W Quad Stereo Speakers and support for Google Assistant, Chromecast, and Play Store.

Xiaomi has a number of television models under its wing, one of which is Mi LED TV 4A Pro. The 32-inch model is HD-ready just like Realme’s offering but it is priced at Rs 12,499. The TV features an Amlogic Quad-Core processor paired with 1GB RAM and 8GB internal storage. Mi TV 4A Pro runs PatchWall OS based on AndroidTV 9. This smart TV from Xiaomi has 20W (2x10W) audio output.

Samsung’s Series 4 LED Smart TV has a 32-inch model that is available for Rs 13,999. The HD Ready model also features a Quad-Core processor and 1.25GB RAM. It runs on the Tizen operating system and supported popular TV apps like Netflix, YouTube, Disney Hotstar, and more. The audio output of the Samsung smart TV is 10W and the display refresh rate is 50Hz, which is lower other offerings in this price range.

📣 The Indian Express is now on Telegram. Click here to join our channel (@indianexpress) and stay updated with the latest headlines

For all the latest Technology News, download Indian Express App.