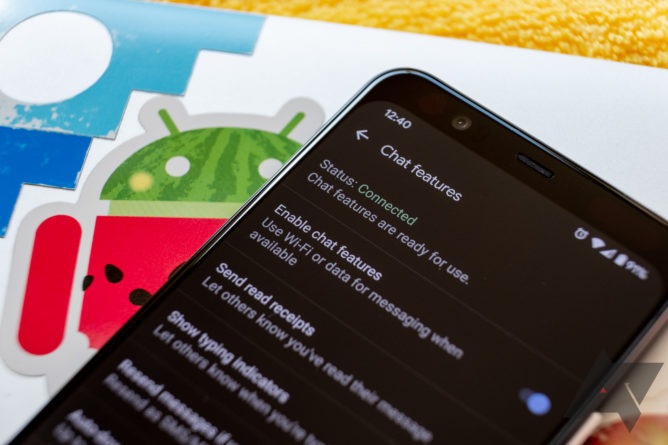 Before Google saved us all from the tyranny of the carriers, some enterprising folks worked out a sort of “hack” that enabled Google’s RCS/chat services, letting us all send messages with the futuristic protocol, even if we weren’t in one of the few supported markets. When it did finally start rolling out in the US, Google said that those using the hack would eventually be migrated after the initial rollout was complete. Now Google has announced that it is disabling that “hack” workaround by the end of the month.

For those of us here in the ‘states, (or the UK, France, and Mexico), this doesn’t really matter. Google officially rolled out RCS/chat support via Messages, so we’re all first-class citizens in the future of digital messaging. But this change will leave those that used the hack in unsupported markets out of luck.

Google’s announcement, made to the Messages Help forum, is just below:

Last year we rolled out the ability for users to enable chat features in a number of regions, including the U.S., the UK, France, and Mexico.

As we prepare to bring chat features to more regions, users who have gotten chat features through unsupported workarounds where chat features aren’t available yet will see them disabled by the end of February. For these users, chat features will be disabled for all versions of the app, including older versions.

We continue to work on bringing chat features to more regions around the world as soon as possible. Click here for additional resources on chat features provided by Google, including information on where they are supported.

Googler Sanaz Ahari Lemelson previously stated that everyone who used the “hack” would be migrated to the official solution following the rollout, and we’re told that’s currently in progress and set to be completed by the end of the month.

For any RCS/chat questions you might have in the meantime, we’ve put together a little explainer on the subject here. But very soon, all those details will apply to a smaller group. Hopefully, Google can roll the feature out to the entire world someday, as history has proven we can’t trust the carriers to implement it correctly themselves.

A Google spokesperson has informed us that the transition for those using the “hack” to the official method is currently in progress, and will also be completed by the end of the month. Our coverage has been updated with this information.

Sadly, the company doesn’t have any news to share regarding new markets, leaving those in unsupported areas without access to Google’s flavor of RCS once these changes are complete.