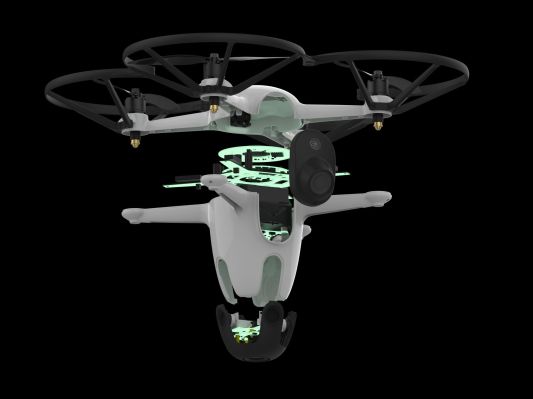 One of the new products unveiled at CES this year is a new kind of home security system — one that includes drones to patrol your property, along with sensors designed to mimic garden light and a central processor to bring it all together.

Sunflower Labs debuted their new Sunflower Home Awareness System, which includes the eponymous Sunflowers (motion and vibration sensors that look like simple garden lights but can populate a map to show you cars, people and animals on or near your property in real time); the Bee (a fully autonomous drone that deploys and flies on its own, with cameras on board to live-stream video); and the Hive (a charging station for the Bee, which also houses the brains of the operation for crunching all the data gathered by the component parts).

Roving aerial robots keeping tabs on your property might seem a tad dystopian, and perhaps even unnecessary, when you could maybe equip your estate with multiple fixed cameras and sensors for less money and with less complexity. But Sunflower Labs thinks its security system is an evolution of more standard fare because it “learns and reacts to its surroundings,” improving over time.

The Bee is also designed basically to supplement more traditional passive monitoring, and can be deployed on demand to provide more detailed information and live views of any untoward activity detected on your property. So it’s a bit like having someone always at the ready to go check out that weird noise you heard in the night — without the risk to the brave checker-upper.

Sunflower Labs was founded in 2016, and has backing from General Catalyst, among others, with offices in both San Francisco and Zurich. The system doesn’t come cheap, which shouldn’t be a surprise, given what it promises to do on paper — it starts at $9,950 and can range up depending on your specific property’s custom needs. The company is accepting pre-orders now, with a deposit of $999 required, and intends to start delivering the first orders to customers beginning sometime in the middle of this year.