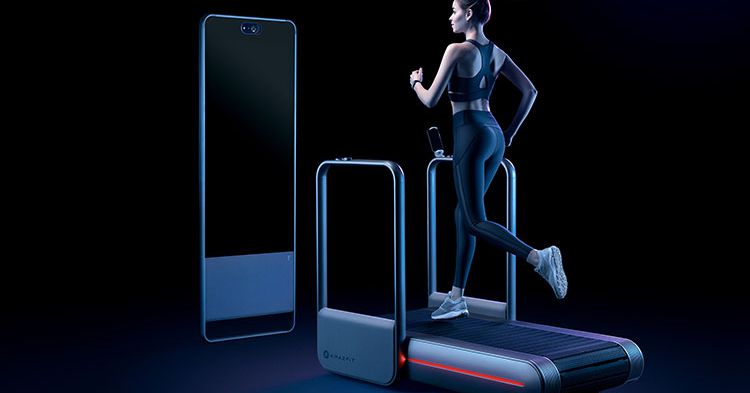 The “Peloton effect” has been several years in the making. Ever since the cult-favorite $2,249 stationary bike that can live-stream classes debuted in 2014, companies have been trying to create their own renditions — whether that’s by making a cheaper version of the bike or implementing the same live-streamed boutique workout class concept into different types of exercise equipment. At CES 2020, it’s clear that we’ll continue to see more of these “entertrainment” products trying to convince the masses that working out is fun.

While Peloton was nowhere to be found at CES this year (the company launched its $4,295 Tread treadmill at CES 2018 and showed it off again in 2019), there certainly was an abundance of workout equipment that looked strikingly similar. Echelon, which has been producing more affordable versions of Peloton since 2018, showcased its latest bike, the Smart Connect EX5S. Though it is Echelon’s fourth indoor bike, it’s the first with an attached HD touchscreen that makes it an all-in-one system rather than requiring you to mount your own phone or tablet to the front of the bike. At $1,639, it’s also a fraction of the Peloton’s cost.

Still, part of Peloton’s charm is the quality of its instructors who have their own personalities and catchphrases that seem to draw users back to their classes. Echelon hasn’t quite found that sweet spot with offerings. But I think if you’ve never used Peloton before, thus have nothing to compare it to, the Echelon is not a bad place to start.

Traditional home fitness companies like Bowflex have also secured a spot at CES, showing off the $899 connected C6 bike it launched last fall. Unlike Echelon and Peloton, Bowflex isn’t offering its own set of live classes; instead, the company built a bike that can pair with third-party apps like Peloton and Zwift so they can achieve the experience without paying the full Peloton price.

Gym staples like NordicTrack and ProForm, which didn’t make a huge splash at CES like in years past, have also been busy building out their own sets of connected fitness equipment. As of 2020, their combined collection of smart training equipment now includes a treadmill, a rower, a high-intensity interval training (HIIT) machine, a bike, and an elliptical — all of which stream classes through the iFit app. The machines range from $449 to $1,999.

Since there are now so many kinds of connected fitness devices coming to market, companies are also seemingly trying to cram as many things into one gadget as possible rather than copy Peloton machines outright. Launched at CES, the Amazfit HomeStudio combines a smart mirror and a treadmill so at-home exercisers can perform a variety of cardio workouts such as running, floor work, yoga, and bilateral training. The machine, which doesn’t yet have a price, uses 3D motion sensors to monitor your form and prevent injuries. At-home users can also use the bars on the side of the treadmill to perform bodyweight workouts and stretch.

The mirror portion, in particular, looks starkly close to fitness platform startup Mirror’s, which features a camera up top, a touchscreen in the middle, and two steel legs standing the machine up. Unlike the Amazfit HomeStudio, though, Mirror doesn’t use sensors to recognize your movements. Instead, it recently introduced one-on-one personal training that uses a webcam to connect instructors to their students and allow them to manually watch for form corrections.

On the heels of a rumored Peloton rowing machine, there were lots of alternatives on the CES show floor that were trying to beat Peloton to the punch. In addition to bikes, Echelon also showed its $1,599 rower with an attached HD monitor. Another fitness company, Hydrow, took a slightly different approach. In 2018, it launched a rower with streamable videos that replicate the visuals of rowing out on the water. This year at CES, the company demoed an upcoming VR feature that doubles down on the concept. As users row on the $2,199 machine (currently discounted to $1,699), they can also look around panoramically in a VR headset to simulate rowing on a four-person boat.

Another traditional fitness company, Ergatta, added a smart component to its roster of traditional water rowers. Similar to the Hydrow, it does not boast a boutique fitness studio experience. Instead, it uses a gamified style of training that lets rowers partake in personal races, challenges, or compete virtually with an online community rather than follow along with instructor-led classes. At $1,999, ($1,799 during the preorder period before March), it’s one of the priciest of the bunch up front, with a $29 per month subscription required to access some of its content and features.

None of these alternatives come close — at least not yet — to the millions of adoring fans and the household name that Peloton has going for it. But while Peloton may not like that other companies are creating cheaper versions of its product (Peloton has even sued Echelon for patent infringement), more competition means more people will be aware of this category of devices, making fitness as trendy as owning the latest iPhone. Whereas Peloton machines are showcased at a few dozen showrooms in the US, you can find Echelon demoing its bikes at Costco stores and Hydrow rowers at Best Buys across the country, making entertrainment machines a bit more accessible.

And let’s face it: Peloton is expensive, and while the price tags for these alternatives are still not cheap, connected fitness is having its cultural moment. (Just take a look at how we all seem to have an opinion about that Peloton ad.) If this trend makes us more aware of fitness as a whole and helps motivate those at home to seek other forms of exercise — whether it’s streaming YouTube classes, meditating, or running outdoors for free — then the rise in smart fitness gadgets is ultimately a good thing. Let people argue about how much they spend working out with what device — as long as they work out.

Correction January 9th: The Ergatta requires a monthly subscription to access some content and features; this article originally stated that it did not. Due to an editing error after initial publication, this story also briefly mixed up the prices of the Echelon and Hydrow.