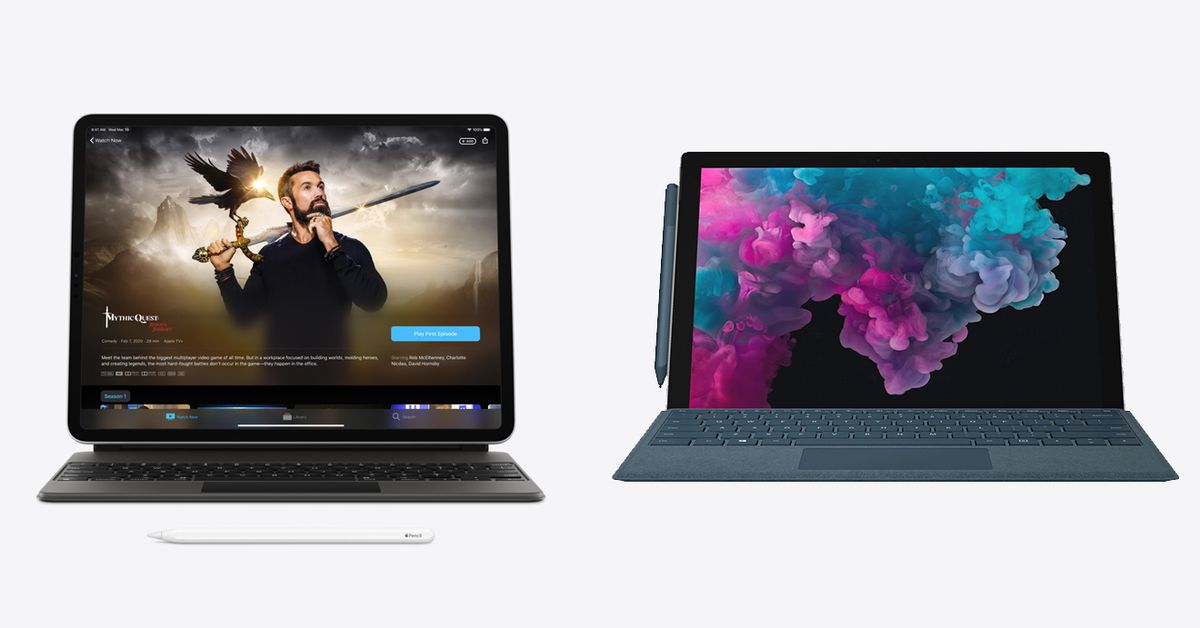 Last week, Tom Warren argued that Apple finally admits Microsoft was right about tablets by adding trackpad support to the iPad. I knew he was working on this piece when I wrote last Thursday’s newsletter, so I didn’t want to step on his spot, but now that it’s out it has me thinking about the right shape for portable, big-screened computers.

I largely agree with Tom’s points, but want to put special emphasis on where he ends: “Now that Apple and Microsoft are aligned on what a tablet can offer in terms of hardware, the battle between PC and iPad will shift toward what both do in software.”

Pointing out that the iPad is about to work a lot more like a Surface isn’t about Nelson Ha Ha-ing Apple’s change. That’s fun for a day or two — but Tom knows, I know, and you know that the differences between the two are still quite real. The iPad is still working to emerge from its iPhone stage while the Surface is still working to leave its desktop legacy behind.

What I have been thinking about now that I’m working from home all the time (besides the obvious things like checking in with people I care about and seeing what I might do to help those who can’t work from home) is that there’s a fundamental rightness to the tablet plus keyboard deck with trackpad idea. And I’ll throw Chrome OS in that mix as well — many Chromebooks also have convertible form factors, though few have detachable keyboards.

I don’t have a home office, so instead I’m picking different places in my apartment to work — and having a device that can conform to the space I’m in is a boon. Sometimes it’s at the kitchen table, sometimes a chair, the floor, the couch, the bed. It’s helpful for me to switch it up a bit, and computers that let me bounce between touching the screen or using a trackpad just feel like they fit better.

In short, being able to remove, stow, or at least hide away the keyboard so you can just interact directly with the screen increasingly feels like an essential feature to me. As does having a trackpad for moving a cursor around the screen when you want to be in a more productive mode. It could be a detachable like the iPad and Surface, or a convertible like many Windows or Chrome OS laptops.

This is no great revelation, but I’m just appreciating it more these days. And although my MacBook is the computer I’m still the most productive on, it’s the one that feels most out-of-step with the times. I don’t want to rehash the arguments about how touch doesn’t belong on the Mac, but I do think if you step back a bit you can see how they’re starting to feel like rationalizations for a shortcoming, not justifications for a choice.

What to do when you’re home all day

┏ The Verge Guide to Working at Home.

┏ Half-Life: Alyx is a satisfying return to City 17. Excellent review from Adi Robertson, which includes this incredible line: “Playing a great VR game is often like visiting a Michelin-star restaurant where the waiter continuously pokes you with a fork.”

┏ Subscribe to Home Screen: a newsletter to brighten your inbox. My friend TC Sottek is launching a newsletter:

Today, I’m announcing my own little love letter to the internet: a new newsletter called Home Screen, which I’ll be sending out every Monday, Wednesday, and Friday. It’s going to be filled with fun links, happy internet happenings, and other curiosities from the World Wide Web. It’s not quite Upworthy, but I do hope it will be uplifting — something to brighten our screens while we’re stuck at home.

┏ Virtual F1 and NASCAR events are filling the gap left by canceled races. I love it so much when you see a story and are like “huh I wonder if that’s a thing” and it turns out to be a huge, deep, fascinating thing with lots of great stories to tell inside it. Sean O’Kane has some of them here:

The race went off without much of a hitch. There were a few more wrecks than you’d find in the eNASCAR series. And yes, at one point (and while fighting for the lead, no less), Pike said Kligerman’s computer tried to force a Windows update, sending him straight into the wall.

┏ Fashion influencers are rethinking their curated aesthetics because they can’t leave their houses. Fascinating story from Ashley Carman.

Do people still want to see cute outfits during a recession? How do you take a studio-quality photo when the only photographer available to you is your husband? What happens when you feel mentally and emotionally exhausted? The curated aesthetic people have railed against — which has defined much of Instagram up until now — might slowly disappear.

┏ Netflix will reduce its European network traffic by 25 percent to manage surge.

┏ Disney Plus and Facebook are also reducing streaming quality in Europe.

Big tech’s attempts to help out

┏ Snap rolling out ‘Here For You’ mental health tool early with focus on coronavirus.

┏ New study aims to use health data from a smart ring to identify coronavirus symptoms.