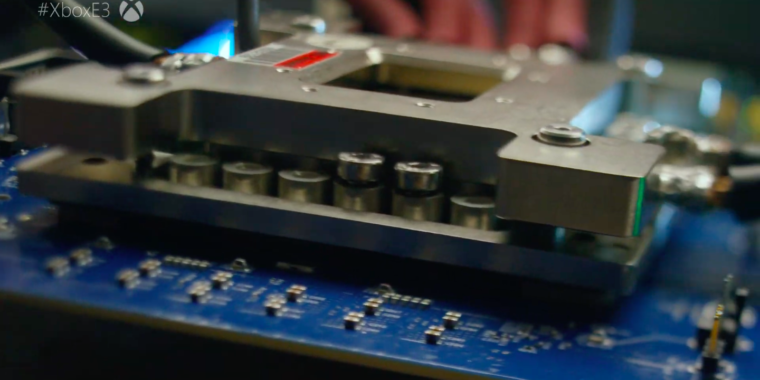 Next in the series —

Back in December, Microsoft showed us what the outside of the Xbox One Series X would look like. Today, the company is announcing in more detail what will be on the inside of the box, with a blog post discussing the machine’s internal specs and new features focused mostly on speed and compatibility.

Microsoft reconfirmed today that “existing Xbox One games, including backward-compatible Xbox 360 and original Xbox games” would still be playable on the Series X with “steadier framerates, faster load times and improved resolution and visual fidelity—all with no developer work required.” More exciting, though, Microsoft seemingly announced a new commitment to forward compatibility throughout the Xbox line via a program called Smart Delivery.

In Microsoft’s words, Smart Delivery “empowers you to buy a game once and know that—whether you are playing it on Xbox One or Xbox Series X—you are getting the right version of that game on whatever Xbox you’re playing on.” That sounds a lot like the existing system that automatically downloads higher-resolution packages for “Xbox One X enhanced” versions of older Xbox One games. Extending the same system to the Series X, though, lets publishers take advantage of features like ray-tracing and SSD load times without needing to develop and sell an entirely new Series X-exclusive version of the game.

Microsoft already hinted at this kind of setup when it announced last month that all of Microsoft’s Series X releases would also be playable on the original Xbox One for the first year or two. Today’s announcement cements that commitment, highlighting that all Xbox Game Studios titles will use Smart Delivery to “[ensure] you only have to purchase a title once in order to play the best available version for whichever Xbox console [you] choose to play on.” We do have to wonder, though, when some games will start to no longer have any “best available version” for original Xbox One hardware.

More than ever, it sounds like games in the Xbox universe will now work like PC games, with a single title rendered at different levels of fidelity depending on the underlying hardware. Publishers will also be able to upgrade games previously designed explicitly for the Xbox One to take full advantage of the Series X—CD Projekt Red has already announced it will be providing a free “Series X upgrade” for Cyberpunk 2077 at some point, which is the first confirmation that the game will be targeting next-gen hardware.

We’ve known since last June that Microsoft was planning to use a Zen 2 architecture CPU inside the coming Series X (known back then only as Project Scarlett). Today, the company said that CPU will have “four times the processing power of an Xbox One” and that the 12 teraflop GPU will be twice as fast as the Xbox One X and eight times as fast as the original Xbox One.

The Series X GPU will be based on AMD’s RDNA 2 architecture, Microsoft said. There’s little concrete known about this ray-tracing-ready update to last year’s RDNA graphics cards, but AMD is planning to publicly reveal more about the 7nm FinFET processors in just a few weeks.

The current scuttlebutt is that the new design could provide an up to 50-percent performance bump above older RDNA chips, which is broadly in line with the stats Microsoft cited. Those numbers also broadly confirm leaked specs discussed by Digital Foundry in late December. And Microsoft is also touting “variable rate shading” that can “prioritize individual effects on specific game characters or important environmental objects” to maintain frame rates in complex scenes “with no impact on the final image quality.”

Microsoft also went into more detail on the advantages granted by the Series X’s previously announced GDDR6 RAM and “new generation SSD,” which can reportedly act as “virtual RAM.” That hardware will be put toward the service of a new multi-game “quick resume” feature that “lets you continue multiple games from a suspended state almost instantly, returning you to where you were and what you were doing, without waiting through long loading screens.” The current Xbox One has a similar feature but can only store a quick resume state for the last game that was played.

The last major update in today’s announcement is the use of “dynamic latency input,” a system that uses a “high bandwidth, proprietary wireless communication protocol” to “synchronize input immediately with what is displayed,” and thus making “controls… even more precise and responsive.” We look forward to learning more details about what that actually means, including how many milliseconds of input lag is implied by the supposedly “immediate” synchronization.