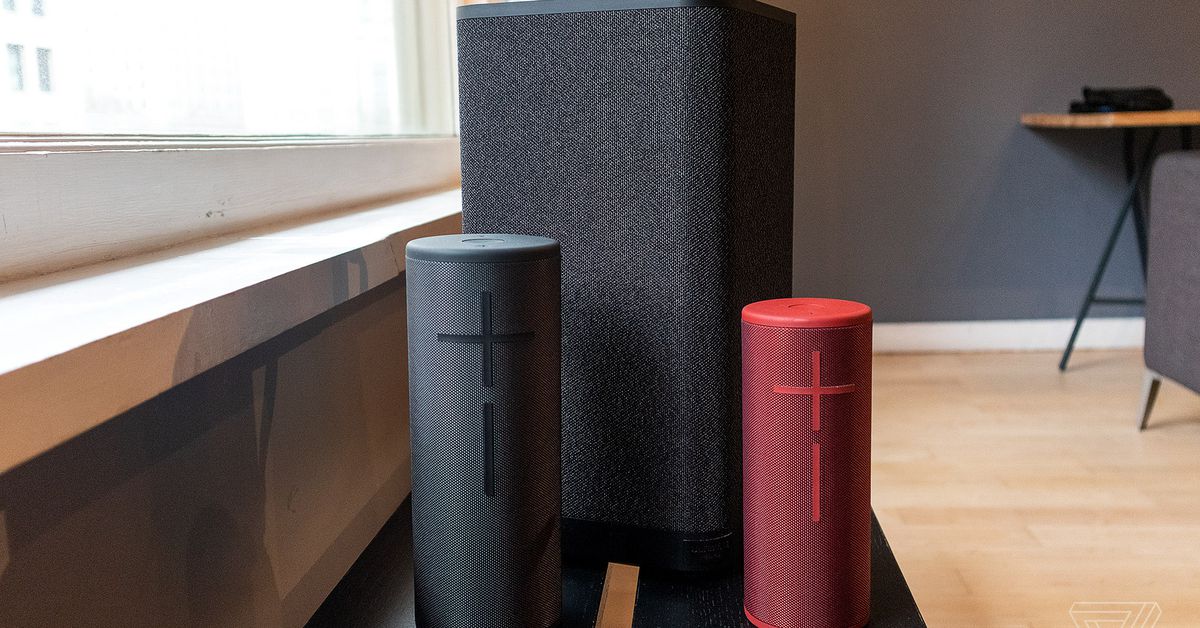 Ultimate Ears’ Bluetooth speakers are great in most situations, but not for big parties. Its new HyperBoom promises to be. It’s a tall, rectangular, 360-degree speaker that’s powerful enough to fill a room with loud, clear sound, and heavy enough to necessitate a handle to carry it around.

It’s not tough to find a party speaker that can blast music across a room full of loud partygoers. Some even cost less than the $399 HyperBoom. But this speaker is worth checking out for a few reasons. Its understated design lets it blend nicely into your room, and it has an adaptive EQ that automatically adjusts to the layout of said room. Plus, it has a bunch of unique features, some new and some borrowed from Ultimate Ears’ other speakers. Also, it can serve double duty both as a party speaker and a home cinema speaker.

Those familiar with the UE Boom will recognize the fabric exterior and the “+” and “-” buttons on the HyperBoom’s top surface. Those buttons can be used to adjust the volume or to check the battery level when you hold them both down. This time, though, they’re capacitive instead of being clicky.

This speaker supports one-touch playlists, another convenient feature you may remember from Ultimate Ears’ recent speakers. After you’ve configured the Ultimate Ears app, you can start playing your favorite playlist in Spotify, Amazon Music, Apple Music, or Deezer by long-pressing on the play / pause button.

The HyperBoom’s buttons make it easier to share music from multiple devices, both wired and wireless. Unlike other Ultimate Ears’ speakers, partygoers no longer have to download the company’s app to connect to it. Two devices can connect via Bluetooth, and just pressing a button on the top-mounted controls switches between them. Ultimate Ears even thought to add a subtle two-second fade to make it less jarring while it hops over to a different device. The HyperBoom has two additional inputs: one 3.5mm auxiliary port and an optical audio port. You can cycle between those wired sources with the other two buttons that surround the play button. That’s an impressive array that lets the HyperBoom double as a party speaker and a sound system for gaming or watching movies.

The fun features are what sets this apart from any other party speaker. But what’s perhaps more important is that this speaker sounds really good. The HyperBoom weighs 13 pounds and is built with custom drivers, consisting of two 4.5-inch woofers, two 1-inch tweets, and two 3.5-inch passive radiators (Ultimate Ears notes those are each the size of one Boom 3 speaker). It’s rated IPX4 when the flap covering the ports is closed, so it can handle some moisture from any direction, be it a brief moment in the rain or a spilled beverage.

Like the Apple HomePod and the Google Home Max, the HyperBoom features an adaptive EQ that changes based on spatial info picked up by its microphone. However, Ultimate Ears insists that this is not a smart speaker. It doesn’t work with voice assistants and the company says that it’s not listening to you, which is a refreshing change of pace.

This big speaker is battery-operated, and according to Ultimate Ears, it has the equivalent of four Ultimate Ears Boom 3 batteries inside. The HyperBoom uses a 90W barrel charger, and it only takes two and a half hours to fully charge. With a full battery, the company claims 24 hours of battery life at half volume or three at full blast. The speaker also has a USB Type-A port, which can recharge your phone or tablet while you stream music from it.

The Ultimate Ears HyperBoom will be available for purchase on March 2nd for $399. For now, it will only release in the “basic black” colorway shown in all of the photographs above.

Photography by Cameron Faulkner / The Verge