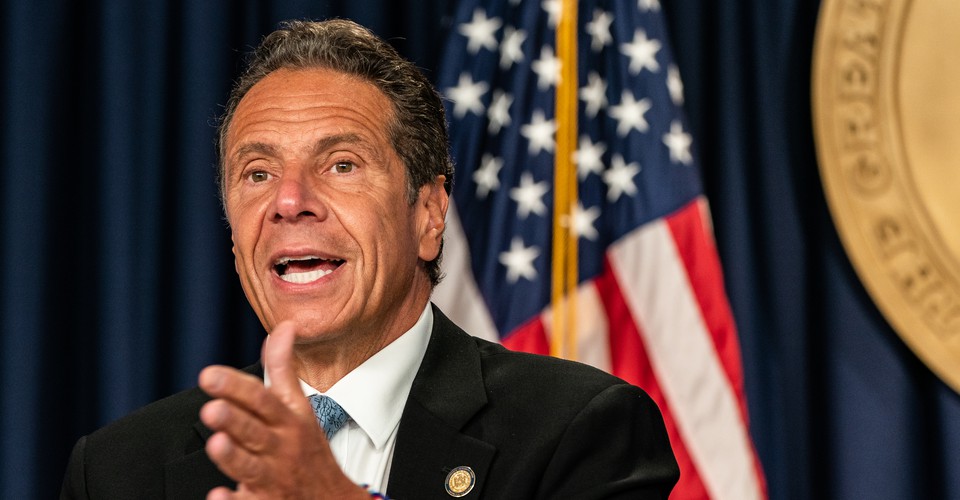 In a nod to those briefings, Cuomo appeared tonight in a pretaped recording flanked by a pair of his signature PowerPoint screens, as he delivered a speech that was a mix of Biden endorsement and New York braggadocio. “We climbed the impossible mountain, and right now we are on the other side,” he said.

Read: Cuomo and de Blasio: A tale of two leaders

To Cuomo’s credit, he appears to have handled New York’s emergence from the depths of the spring better than he handled the state’s descent. New York does vastly more testing than any other state in the country; it reopened cautiously and in stages, and the virus has not resurged as it has elsewhere. To prevent a second wave, Cuomo and other northeastern governors have implemented a mandatory 14-day quarantine for travelers from states where the virus is spreading uncontrolled. Deaths have slowed to a trickle, and today Cuomo announced that New York’s infection rate had remained below 1 percent for a 10th consecutive day.

It is that more recent record that Democrats want to highlight, and that Cuomo has delighted in bragging about. “As they proved their way failed, we proved that our way succeeded,” he said in a reference both to Trump and to Republican-led states that reopened too quickly. Cuomo made an affirmative case for masking—“because we are smart, and because I care about you and because you care about me”—and for social distancing, “because staying away shows how close we actually are.”

Yet in another odd turn, he described the virus as “a metaphor” for a body politic that had been weakened by division. Viruses have always been handy metaphors, but this one has literally killed more than 170,000 Americans.

Cuomo does have a good story to tell about New York’s stabilization and recovery—health-wise, if not yet economically—over the past few months. But can a finally flattened curve really count as a success when the initial spike was so severe, so deadly, and so preventable? The governor would say yes: He’s routinely deflected questions about what he could have done differently and skirted blame for New York’s nursing-home tragedy.

Biden and the Democratic Party, too, have chosen to look only at Cuomo’s triumphs rather than his failures. Between the early surge in the Northeast and the summer wave everywhere else, there’s nary an American leader they could summon who doesn’t have a checkered record on COVID-19. Democrats were looking for pandemic heroes to feature tonight—doctors, nurses, businessmen and -women, and even political leaders. In the legend of Andrew Cuomo, however, they settled for something of a myth.

We want to hear what you think about this article. Submit a letter to the editor or write to letters@theatlantic.com.

Russell Berman is a staff writer at The Atlantic, where he covers politics.