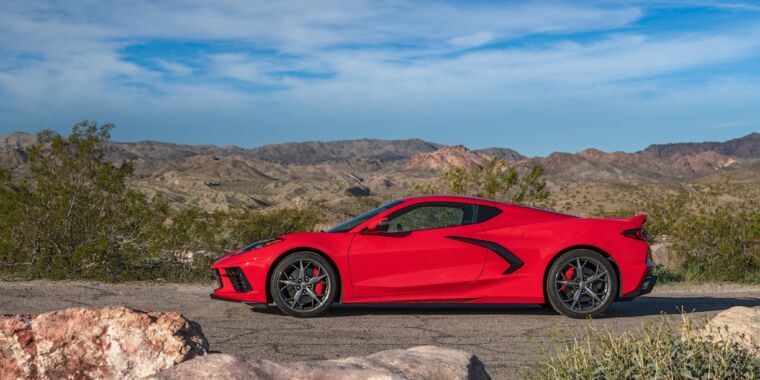 Predicting the arrival of a mid-engined Corvette has been a perennial bench-racing sport in the auto news game for decades. The first of the Chevrolet research cars that placed an engine behind the driver goes back to 1960, conceived by the first chief engineer of the Corvette, Zora Arkus-Duntov. Now, after thinking about it very, very long and very, very hard, Chevrolet starts building production mid-engined Corvettes this year, some 60 years after that first research vehicle.

With all that pent-up anticipation, could the new $59,995 Corvette actually be both brilliant and actually shy of the mark? We tested several with different suspensions on the road and the track around Spring Mountain Raceway in Nevada to glean the truth.

The inescapable reality of designing a mid-engine layout in the sports car segment is that, well, the Italians basically own it. But they didn’t pioneer it. Post-WWII, Porsche built sports-racing 550 Spyders, RSKs and 904s, but Ferrari and Lamborghini built street cars placing engines behind drivers’ heads in earnest by the 1960s.

A cab-forward, mid-engine format often helps define an exotic car, and if the Corvette’s overall form factor is somewhat akin to a Ferrari 488, 458, 430, or even a 360, the surface details are not. But the overall goals are more determined by aerodynamics. First, locate the two front- and two side-mounted radiators in the best positions for airflow. Second, minimize total drag. And third, create as much downforce as possible without getting crazy with drag-inducing wings and protuberances.

Kirk Bennion, exterior design manager on Corvette, tells us that the design team began framing up three body bucks for clay models with three different side treatments after the car’s architecture was finalized.

“Despite all the technology and virtual capabilities we have, we still wanted to bring the models out to our viewing patio,” recalls Bennion. “It’s actually the size of a football field, because you need those different perspectives from ten feet, 100 feet, 300 feet.” This patio, by the way, is the same one used all the way back to the earliest Corvettes.

Bennion also says the rear of the C8 is sensitive, and we can see why. Air extractors are pushed to the extreme corners, the lower black panel hints at the previous-generation C7 Corvette, and the rear end’s height is dictated by aero needs, so from behind the car looks prodigious and perhaps even high-hipped.

The C8 is also nearly four inches wider (100mm) and 5.3 inches (135mm) longer than the outgoing C7. However, the arrow-like shapes of the taillights, the recess for the license plate, and the very vertical lower sides of the rear add up to multiple angles, few of which compliment each other.

Meanwhile, our critical eyes see the front end as assertive but not glowering madly. The side graphic is dominated by a jarring black “boomerang” marking the air intake, though it can be painted body color optionally. The rear shoulders rise up to engine cover height leaving no doubt that there’s a powertrain back there, with Z51-optioned cars wearing a small wing that really only rises about as high as a conventional ducktail spoiler. But in spite of the proportion and visual mass at the back, there’s really no mistaking it for anything other than a Corvette.

Our premium trim package road car (3LT, $77,230 as tested) with GT2 semi-aggressive seats uses leather on most inside surfaces. (There are seats of every type, from comfortable multiway adjustable ones to more hardcore track-bred options, and each offers its own benefits.) The primary touch points use very high-quality materials, but secondary and tertiary interior trim is not as good as in Porsches, Mercedes, and other sports and luxury makes.

Seating position is obviously forward relative to the outgoing C7. The driver sits more or less at the polar center, so the car rotates about its center axis from what’s effectively the driver’s position, equalizing any yaw effects of understeer or oversteer and increasing the feeling of connectedness.

Chevrolet paid a lot of attention to getting in and out of the car, to the extent that the door sills are far less bulky to traverse than your average high-performance mid-engined car. Most mid-engine chassis run substantial structure under those doors sills, contributing to the distance one must hop over when getting in. This also places both occupants closer to each other than most front engined cars. With a rigid tunnel in the middle big enough to fit a driveshaft (or even batteries for a hybrid variant, perhaps?), the new Corvette makes that leap across the door sill minimal.

But then we come to the “wall.” A tall, gently curving and descending divider separates driver from passenger. It also houses a long, single column of climate controls that might seem overwrought, but actually works well. However, this wall makes the passenger feel restricted. Because the wall is farther away from the driver, this feeling doesn’t exist on that side of the aisle. While this might create a cozy, secure feeling for some, it also undoes a good deal of that potential roominess between the occupants generated by using the aforementioned narrow door sills and wide central tunnel. More seat time is needed to state this for sure, but this might be a missed opportunity. Chevy has already gone to the trouble to engineer a right-hand-drive version in-house for overseas markets like Japan, the UK, Australia, South Africa, and the like.

The squared-off steering wheel (a “squircle,” Chevy calls it) is really not noticeable when actively steering and paying attention to the road. It also provides a clearer view of the digital gauge cluster, which can be custom-configured. But it is odd to look at and not just for its shape, but for the downward-pointing spokes. They don’t go along with the geometry visually set up by the squircle. Upside? You don’t really notice when driving; only when pondering. Despite the steering wheel and the wall, the new C8 wears the best interior yet in a Corvette. It’s a place well-suited to either rack up interstate miles or track up your favorite racing circuit.

The 6.2L LT2 V8 engine is a large one and uses a pushrod, internal cam valvetrain design with two valves per cylinder. But before the low-tech darts get thrown, realize that it belts out 495hp (369kW) and 470 lb-ft (637Nm) and doesn’t stop the rock concert until 6,500 rpm. It also uses two scavenge pumps to pull oil from pooling in the heads during sustained cornering of 1.25G.

As eager as the LT2 engine is, the dual clutch transmission is even more so. Co-developed with and built by Tremec, the eight-speed transmission is fast and smart enough to need no manual instruction when flying around the track and smooth enough to instruct imperceptible shifts in slow traffic. It uses one odd gear shaft and one even gear shaft, so that power delivery is not interrupted. Should you want to shift for yourself, there’s also no intermediary computer (often called a “gateway module”) for the shift paddles and therefore no lag in manual shifts. So, yes, the steering wheel has shift paddles. But strictly speaking, there aren’t many times you’ll need to use them, even when getting your Andretti on. It’s a brilliant gearbox, full stop.

Driving fast on the road in the limited time we had showed just how matter-of-factly the new Corvette negotiates challenging twisties and undulating surfaces. The Corvette’s adhesion and performance limits are thoroughly unattainable on public roads without driving like a raging lunatic, making a brisk run, even at 6/10ths of the car’s capability, feel like a leisurely trot. The only demerits are a slight juddering of the dual clutches when feathering the brake pedal at creeping traffic pace, and a little numbness in the steering when turning in and through mid-corner when driving sedately.

But unlike many sports cars, the Corvette comes nowhere close to beating you up on the road, owing to its ultra-high limits. All our track laps were done in the Z51 Performance package edition that also used FE4 magnetorheological dampers ($5,000 and $1,895, respectively). With the optional FE4 damper package comes six driving modes and also Performance Traction Management to tweak the car’s stability control on track, but you have to overcome the slightly fussy action of the dial on the console. Also, seemingly forgotten by many, the C8 finally retires the Corvette’s long-running transverse leaf springs front and rear (since 1984 at both ends and since 1963 at the rear), in favor of conventional coils.

Ride quality and bump isolation are genuinely impeccable. The huge span between relaxed comfort on the one hand and thoroughbred-level handling composure on the other when driving on a track with your hair on fire are nearly nonexistent anywhere.

And here is the Corvette’s most significant dynamic achievement. Yes, it’ll do 0-60mph in 2.9 seconds and top out at 194mph (312km/h), but the only supercar I’ve driven in the past five years that surpasses or comes close to the new Corvette in the ability to cover this vast chasm between Seville and Senna is a McLaren; either the 570 or 720. Considering the cheaper of these McLaren costs over $100,000 more that the C8, that’s astounding. [I reckon the Lotus Evora also belongs in that company—Ed.]

By the way, at a soft, genteel walking pace, the 495-horsepower Z51-equipped engine also quiets down immensely from the Trans-Am soundtrack or 6,500 rpm. And no supercar or exotic can match that. Few can match it at the pump either—at 27mpg on the highway (8.7l/100km) and 15mpg (15.7l/100km) in the city it’s not especially frugal, but it is better than either the old C7 model or similarly quick mid-engined exotica.

A front suspension lift system can raise the nose 2.8 inches (40mm), but here’s the clever part: up to 1,000 locations can be stored in GPS. The car will remember those and self-activate when approaching such a driveway or speed bump at under 25mph. This sounds like a minor thing, but you only have to experience the sound of your car scraping the underside of its nose on a speedhump or up a curb cut a couple of times in something low-slung and expensive to realize this is a real advance. For those who are curious, GM repurposed an ABS hydraulic pump to power the nose lift.

Is the new Corvette revolutionary, rather than evolutionary? For sure. Does it come up short at all? Not really. Certainly not significantly enough to call it out in a meaningful way, aside from the aesthetics—Automotive Editor Gitlin still can’t make peace with the way it looks, complaining at every opportunity. But in performance numbers, behavior on the road, talent at the racetrack, and in cost, the 2020 Corvette is no less than an attainable supercar.