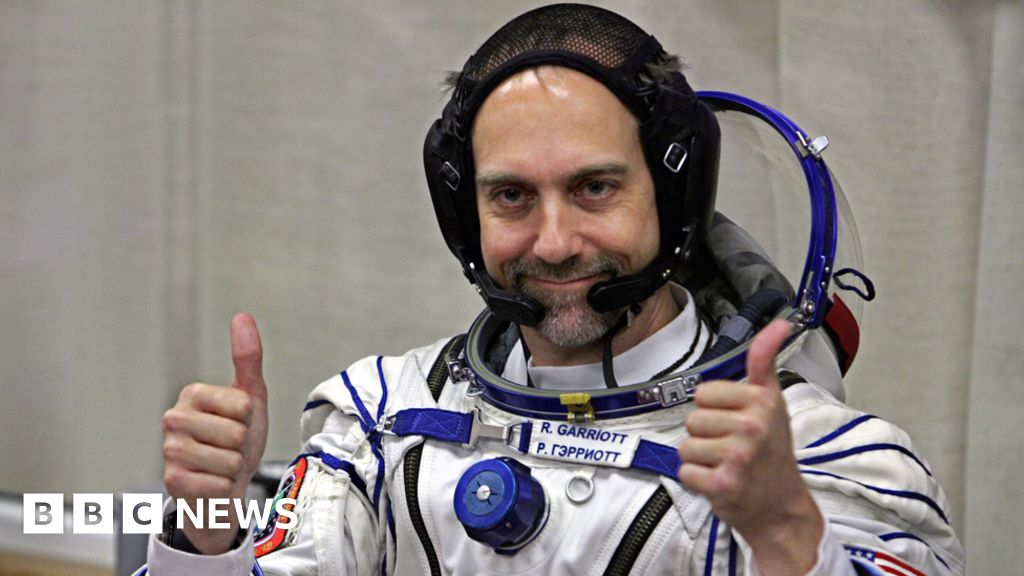 The BBC’s weekly The Boss series profiles different business leaders from around the world. This week we speak to Richard Garriott, computer games veteran, and space tourism pioneer.

Blasting into space on a Russian Soyuz rocket, Richard Garriott says it was “the most intense eight and a half minutes” of his life.

Launched from the Baikonur space centre in Kazakhstan, it took just that amount of time for the rocket to hit 28,000 km/h (17,000mph) and reach orbit.

This was back in October 2008, when Richard became only the sixth person to go into space as a paying traveller. He spent 12 days on the International Space Station. “It was a truly profound and life-changing experience,” says the 58-year-old.

The trip was the fulfilment of a lifelong ambition for Richard, who, thanks to making a fortune in the computer games industry, could afford the price – a whopping $30m (£23m). It also allowed him to follow in the footsteps of his father Owen, an astronaut who twice went into space with Nasa, in 1973 and 1983.

Richard had wanted to join Nasa, too, as a younger man, but his ambition was blocked because his eyesight was not good enough. Instead he started to design computer games as a teenager.

Raised near Houston, Texas, Richard remembers his high school getting its first computer in the mid-1970s. As he was an excellent science student, he says that the teachers let him use it as often as he liked.

“They basically said ‘well, we have this computer that we don’t know what to do with – it’s yours, do what you want with it’.”

Discovering that he was something of a natural at computer programming, he started to design his own games. In 1979, aged 18, one of his games was released commercially.

Working part time in a computer store, Richard had shown his role-playing game – Akalabeth: World of Doom – to his manager. The man was so impressed that he asked Richard to make copies that he could sell from the shop.

It caught the eye of one of the first gaming distributors, who said he wanted to ship them nationwide. Some 30,000 copies were sold, from which Richard was paid $150,000 in royalties “for a few weeks of afterschool time at high school”.

That amount of money was nearly three times his father’s annual Nasa salary. “I sat down with the rest of the family, who said ‘well, this is a good idea, maybe you should do more of these’, and I started my career.”

His parents did, however, insist that he still went to university, and so he enrolled on a degree at the University of Texas at Austin. While at college he released the first instalment of his fantasy world, role-playing game series Ultima. Think dungeons and dragons, medieval knights, and wizards.

With Ultima 1 selling 50,000 copies, Richard ultimately dropped out of college to focus on making computer games full time. And together with his brother he set up a business called Origin Systems to release the later versions of the game.

The Ultima series went on to sell millions of units, and gained a dedicated following within the growing gaming community. Richard would connect with devotees by going to fan conventions dressed in medieval costume, as a character from the game called Lord British.

However, on one occasion things took a dark turn when a crazed fan broke into his Texan house, and Richard had to fire off warning shots from his Uzi machine gun to defend himself before the police arrived.

In 1992, Richard and his brother sold Origin to gaming giant Electronic Arts for $35m. Richard stayed with Electronic for eight years, before leaving to create a new business called Destination Games. A number of other gaming firms then followed, with his current company – Portalarium – formed in 2008.

Considered a pioneer within the gaming community, it is widely accepted that Richard was the first person to use the term “avatar” to apply to the on-screen representation of a person playing a computer game.

He says he still loves working in the industry. “I am a very light-hearted person,” he says.

“I’m a devout believer in work should be fun. If work is not fun, you are doing the wrong work.

“Maybe that’s idealistic, and it’s not fair to presume everyone in life can have that opportunity. [But] if you can enjoy the work you’re doing, it makes life better, and so that’s one of the markers of success, being able to do that.”

To help get himself into space, Richard co-founded a company called Space Adventures in 1998. Unlike the continuing efforts of Virgin Galactic and Elon Musk’s Space X, Space Adventures didn’t set out to build its own spacecraft. Instead it would arrange for its customers to hitch a ride on the flights of the Russian space agency Roscosmos. Nasa was also asked, but said “no”.

The first person to get into space thanks to Space Adventures was American businessman Dennis Tito, who in 2001 became the world’s first space tourist. Richard’s trip came seven years later, and although he co-owns the company he still had to pay the full price. Space Adventures has so far put seven people into space.

Fred Schmidt, a Texan technology consultant, says that “Richard’s number one trait in his ongoing entrepreneurial journey is how his boundless imagination plays in tandem with his insatiable curiosity”.

Meanwhile, Richard Wiese, president of the Explorers Club, a professional society that promotes scientific exploration, says that Richard “is often the smartest and most creative person in the room”.

He adds: “The idea that Richard would figure a way to get himself into space when ordinary paths proved impossible speaks volumes on how he views the possible. I often wonder if Richard gets the proper credit for being one of the first pioneers in private space.”

Looking ahead, Richard says he wants to return to space. “I dream about my past and future space flights,” he says. “Having travelled once to space only deepens your desire to spend more time there.

“I experienced what many astronauts refer to as ‘the overview effect’, which makes your bond and care of the Earth greatly deepen.”