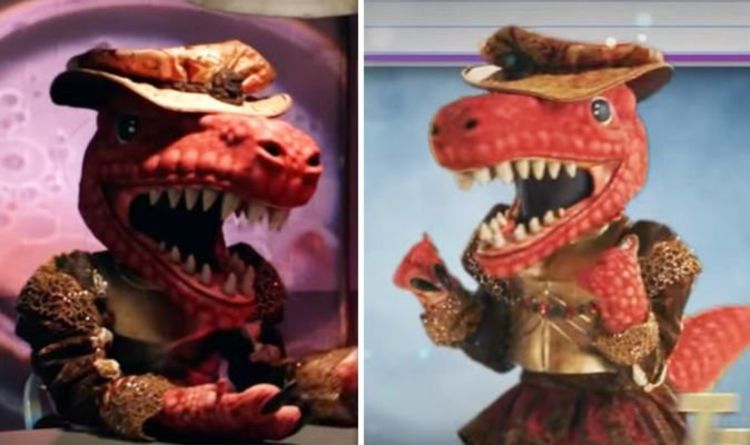 The Masked Singer fans all over the USA have flooded the internet with their guesses and theories for each performer on this year’s series over the past few weeks. The Fox contest welcomed Night Angel, Rhino, T-Rex, Astronaut, Bear and Swan as part of the third group of contestants and it didn’t take long for the dinosaur-like performer’s identity to come into question.

While the likes of Rhino and Night Angel have bamboozled The Masked Singer viewers, a majority of fans are pretty sure they’ve cracked the case of T-Rex’s identity.

In fact, a number of fans were convinced they’d rumbled T-Rex before they’d even performed.

It is teenage superstar JoJo Siwa who has emerged as the likely candidate to be under the mask, with thousands of Fox viewers in agreement online.

However, one fan has spotted major hint in T-Rex’s clue package that it isn’t JoJo but is, instead, another celebrity who found fame in their teenage years.

The Masked Singer on FOX: Who could be the T-Rex? (Image: FOX)

The Masked Singer fan was so convinced, they took to Reddit and published the thread: “I KNOW WHO THE T-REX IS!!!”

The user, named Hault99, then explained it isn’t JoJo under the mask but it’s, in fact, social media star Liza Koshy.

The theory reads: “The T-Rex is Liza Koshy. Think about it, in her last clue video, she said the words ‘Double Dare’, which is a game show she hosts on Nickelodeon.

The Masked Singer on FOX: Is Liza Koshy the performer? (Image: GETTY)

“There is a volcano in every one of her clue packages.

“Also she is a famous YouTuber which is what the ‘U’ stood for. Liza Koshy, welcome to The Masked Singer.”

Liza found fame on social media platform Vine when she was a teen back in 2013 and has gone on to present her own TV shows as well as launch a globally successful YouTube channel.

But are the clues enough to confirm she’s under the T-Rex mask?

Not everyone’s convinced as several fans replied to the Reddit user defiant in their stance that it is Jojo.

A second agreed: “Nope, it’s JoJo Siwa. The first clue package is about her being on Dance Moms. Same over the top energy and same ‘singing voice. I watch her youtube channel so I knowwwwww.”

While a third similarly was unswayed: “Its jojo, my six yr old loves her. I played a video of trex with out my daughter seeing and she asked if it was jojo.”

Not all is lost for The Masked Singer theory, however, as it did have some backing.

Will The Masked Singer viewers be in for a shock if T-Rex removes her mask on Wednesday?

Or will they be waiting until the final to discover once and for all who’s under the mask?

The Masked Singer USA continues every Wednesday on Fox.