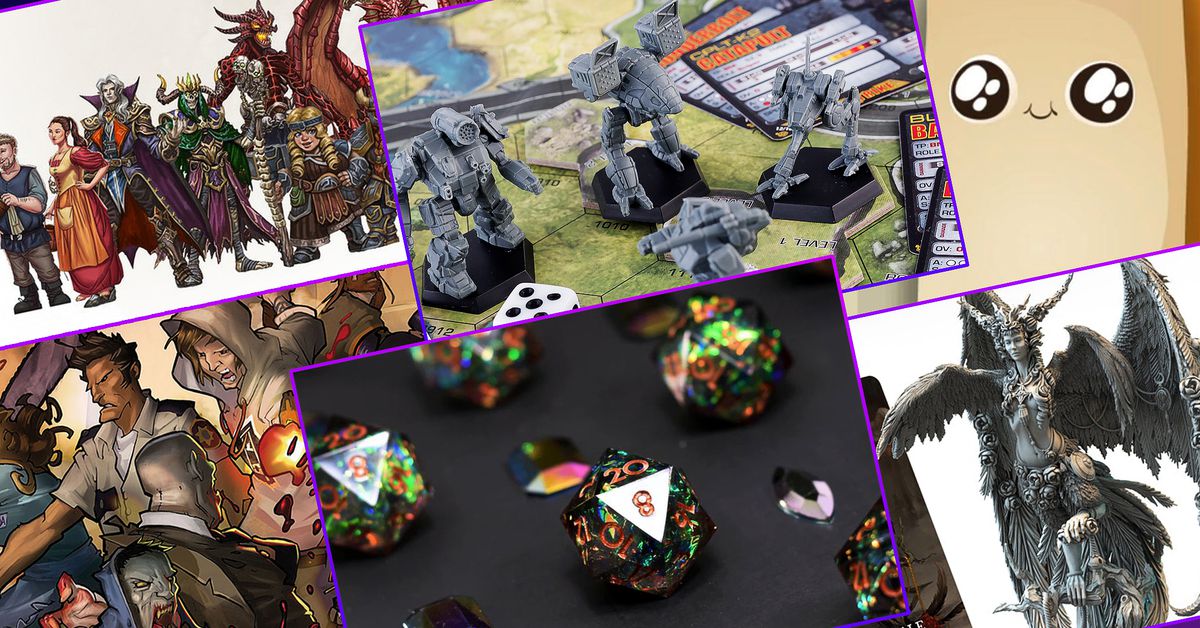 In the past year, Kickstarter campaigns for tabletop games continued to dominate, while the video games category showed it has stabilized its decline from 2015’s highs. The games category as a whole earned more than $219 million, up nearly 9%. Games now account for 34% of the backer revenue for Kickstarter, which hopes to diversify its portfolio in 2020 and beyond.

Polygon has an exclusive breakdown of the data straight from the source, plus an interview with Kickstarter’s Luke Crane, who begins 2020 as the head of outreach and international at Kickstarter.

The year wasn’t without its blockbuster hits; the top 10 campaigns in the tabletop category alone accounted for more than $31.5 million in funding. But Crane points to the robust numbers for small- and medium-sized campaigns as a sign of health in the category overall. Game campaigns asking for less than $5,000, for instance, accounted for more than $4.6 million in funding, while those between $5,000 and $50,000 earned over $118 million.

Kickstarter also organized its own promotions to inspire new and smaller creators. Crane noted in particular that Zine Quest, which asked participants to make a small magazines to send out to backers, was tremendously successful. Kicking off 2020, Kickstarter has also begun an effort called Make 100, which asks creators to commit to making just 100 units of something special.

Most important of all, the Kickstarter community itself continued to grow. More than one million people made pledges to games in 2019, up from around 868,000 in 2018.

In 2015, the video game category on Kickstarter spiked with more than $41.5 million pledged. The following year it dipped to just $17.6 million, before bottoming out at $15.8 million in 2018. Last year the category rebounded slightly to $16.3 million.

Crane was frank with the reason why those numbers have fallen.

“One thing that’s happened is that the video game blockbusters, that style of project has really gone away,” he told Polygon. “We’re not seeing five and six million dollar projects coming through Kickstarter anymore. You’re not really seeing them anywhere out in the crowdfunding space anymore. That takes quite a bit of money off those metrics right there.”

Over the past year, consumers have only just begun to receive the video games that were part of the rush to Kickstarter in the middle part of last decade. Some, like Shenmue 3, have been a disappointment. Others, like the Star Citizen games, have yet to fully materialize.

“Obviously, some of the projects that have launched on Kickstarter have had a troubled path to launch,” Crane said. “Some of them have even not made it to launch, and I think that has hurt the community, kinda damaged trust in a way. That said, that $16 million is home to a lot of bright, shiny projects that wouldn’t have made it out into the world otherwise.”

Outside influences complicated Kickstarter’s mission throughout 2019. Chief among them is the ongoing unionization effort within the company. Both Kickstarter management and the fledgling Kickstarter United have agreed to a media blackout until the issue is resolved. If workers do organize successfully, they would represent a major win for labor in the technology space as a whole.

Even more threatening is the ongoing trade war between the United States and China. Many tabletop games in particular are manufactured overseas, and the Trump administration’s efforts to apply pressure has created unease among creators.

“Personally, I’ve been having this conversation with creators for the past six or eight months,” Crane said, referring to the trade dispute, “talking about contingency plans, talking about what the options are should the political headwinds shift against us.”