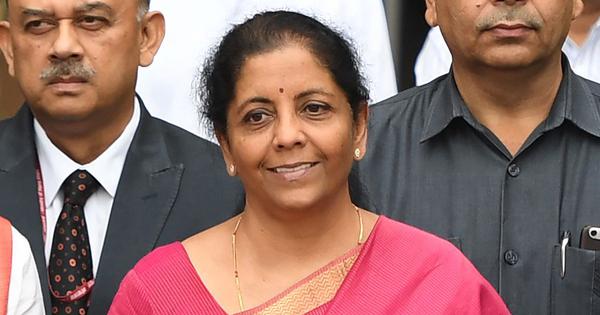 An association of bank officers on Saturday criticised Finance Minister Nirmala Sitharaman for allegedly rebuking State Bank of India Chairperson Rajnish Kumar on a public forum, but soon withdrew its statement. In its original statement, the All India Bank Officers’ Confederation had called Sitharaman’s attack on India’s largest bank “unsavoury”.

The association’s criticism was for a purported audio clip of Sitharaman at an event last month, which has been widely shared on social media, The Indian Express reported. The finance minister can be heard calling the country’s largest state-run lender “heartless” and “inefficient” as bank accounts of some 2.5 lakh tea garden workers in Assam were not functional. Scroll.in could not independently verify the authenticity of the clip.

Sitharaman allegedly made the comments at a financial inclusion outreach programme in Guwahati on February 27. Kumar, Assam Finance Minister Himanta Biswa Sarma and several senior bureaucrats from the state and the Centre were present at the event.

In the audio clip, an SBI officer tells Sitharaman that the bank needed clearance from the Reserve Bank of India to make the accounts of tea garden workers functional, and that it could be done within a week.

“Don’t tire me out…don’t tire me out,” the finance minister purportedly says in response. “SBI chairman you will meet me in Delhi on this matter and I am not letting this go. This is utter omission of job. I hold you completely responsible for a failure and I shall have a detailed talk with you. [You should] get the accounts going and not one of the tea garden workers will suffer because of your obduracy.”

“Don’t tell me you are the largest bank,” she adds, according to IANS. “You are a heartless bank. SLBCs [State Level Bankers’ Committees] don’t function like this. This will not work. Nothing makes up for your inefficiency…Let me be very blunt on this…”

In its withdrawn statement, All India Bank Officers’ Confederation General Secretary Soumya Datta had said: “She [Sitharaman] launched a vituperative verbal tirade at Rajnish Kumar and accused him of being responsible for all the failures of the bank in extending loans, especially to the tea garden workers in the state of Assam.”

He also pointed out the “huge burden” on the SBI in bailing out Yes Bank, and said it was an irony that these comments were made when public sector banks were “overburdened predominantly with various government schemes”.

Later in the day, the AIBOC backed down on its criticism of the finance minister. “I on behalf of AIBOC is withdrawing the press release as it was erroneously released,” Dutta said.

In a series of tweets, Assam finance minister said the confederation “has not understood the context”, and that he strongly opposed it. Sarma said the state had opened nearly 8 lakh accounts of tea garden workers in 2017. “Subsequently, we transferred an incentive amount of Rs 5,000 in each account,” he said. “Due to procedural lapses and lack of alertness on part of local banking officials, a sizeable section of these workers were being deprived of their rightful dues as they could not withdraw their own money from these accounts.”

Meanwhile, Sitharaman tweeted the AIBOC letter which said that its statement was “erroneously issued”.