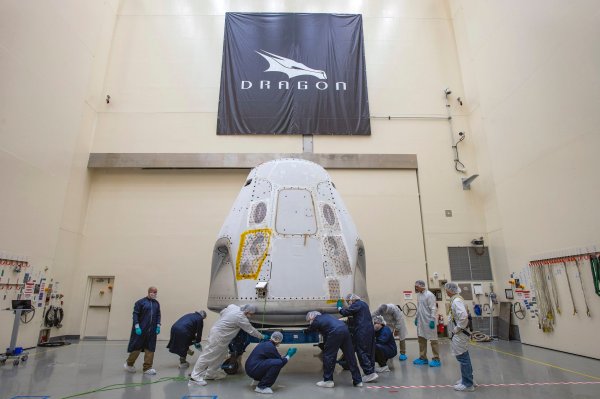 SpaceX has moved its Crew Dragon commercial astronaut spacecraft to Florida, the site from which it’ll launch in likely just two to three months if all goes to plan. The Crew Dragon capsule is now going to undergo final testing and checkouts in Florida before its departure from Cape Canaveral Air Force Station, where it’ll launch atop a Falcon 9 rocket, with NASA astronauts Bob Behnken and Doug Hurley onboard.

Behnken and Hurley will be taking a trip to the International Space Station (ISS) courtesy of the Crew Dragon, as part of a demonstration mission codenamed “Demo-2” by SpaceX and NASA that will serve as a key step in the ultimate verification of the spacecraft for regular service carrying people to and from the ISS. SpaceX’s Crew Dragon is one of two spacecraft that aim to achieve this operational status for NASA, alongside the Boeing Starliner CST-100 crew vehicle, which is undergoing development and testing.

Boeing’s spacecraft has recently encountered some issues that could extend its testing timeline and set back its goals of performing its first flights with astronauts onboard. The Starliner encountered two potentially serious software issues during an uncrewed demonstration mission that took place in December, and now NASA and the company are determining corrective action, including safety reviews of Boeing and its software development and testing processes.

Meanwhile, SpaceX performed an in-flight abort test in January, the last major demonstration it needed to do before moving on to the crewed demo mission. That test was by all accounts a success, showing how the Crew Dragon would separate and distance itself from the launch craft in case of an unexpected error, in order to safeguard the astronauts onboard.

SpaceX has been sharing details of its preparation for this final planned demo before operational commercial crew flights, tweeting earlier this week about its spacecraft undergoing ultrasonic testing. Currently, the Demo-2 mission is tentatively set for May 2, though that date is said to be flexible and could be moved up or pushed to later, depending on mission needs and remaining preparation progress.