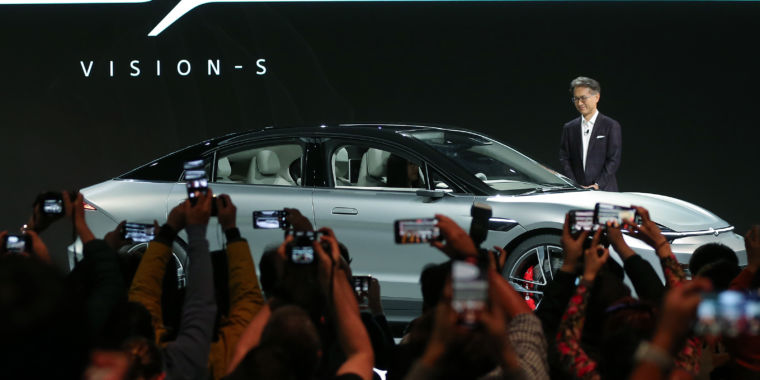 The concept shows off Sony’s cameras, sensors, and entertainment.

It seems like just yesterday I was complaining about CES turning into a car show. Someone must have heard me, because it appears the response from the tech sector was to say “hold my beer and watch this…” On Monday evening in Las Vegas, Sony used the last few minutes of its CES keynote to show off a concept electric vehicle called the Vision-S.

Yes, Sony, maker of Walkmen and Playstations and TVs and so on. And yes, an EV concept car, in this case a sedan that, if you squint, looks a bit like a cross between a Porsche Taycan and a Lucid Air. We don’t believe Sony has any plans to start challenging Tesla in the marketplace or to offer a driving experience beyond hooking a steering wheel up to a PS4. Instead, the Vision-S is a showcase for all the enabling technologies that Sony does have a hand in.

There are sensors—33 of them in total, including high-resolution CMOS optical, solid state lidar, radar, and time-of-flight sensors, all of which are fused together to create an advanced driver assistance system (ADAS) suite that Sony is calling a “Safety Cocoon” (pdf).

The interior similarly showcases the entertainment technology side of Sony’s business. There’s nothing particularly ground-breaking, but it’s all very on trend, including a massive dashboard-spanning display like the Byton M-Byte we looked at on Monday. And if the concept movie is to be believed, the Vision-S happily syncs with your Sony-built handheld and presumably the rest of your Sony-branded digital lifestyle ephemera.

The concept also involved the input of more traditional automotive suppliers like Continental and Bosch, and we believe it uses a pair of 200kW (268hp) electric motors that can propel it to a top speed of 149mph (240km/h), hitting 62mph (100km/h) from a standstill in 4.8 seconds.