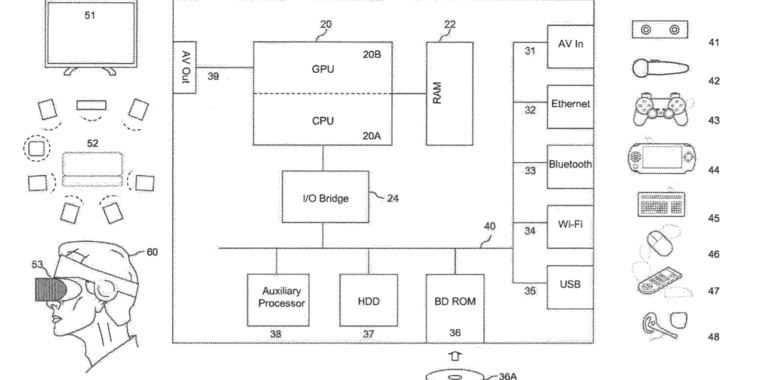 A recent Sony patent application identifies a problem many console gamers may be able to identify with when moving between consoles: “To log in to their account a user is often required to enter a password, which may be seen by other users. Moreover, once a user has entered their password, a situation arises where the user remains logged into their account unless the user subsequently performs a log out operation, which can result in other user’s [sic] potentially obtaining access to the user’s profile.”

Luckily, Sony’s patent application for an “apparatus, system, and method of authentication” also offers a solution: a new method for “determining an identity of a user holding a handheld controller” by detecting and analyzing that user’s unique “manipulations of the controller.”

The full patent application, filed by Sony in February and published by the US Patent Office late last week (and first unearthed by SegmentNext), details how this detection system would rely on measurements of the controller’s position, orientation, and the “closed or open state of a pressure sensitive switch” (i.e. pushing the controller’s buttons). Analyzing how these values change over time for different users during standard gameplay can provide a unique signature, the patent suggests, which can be recognized the next time they pick up a controller.

The way players move a controller over time also feeds into the detection algorithm. “Some users may have a greater tendency than others to move their arms and hands while using the controller,” the patent says. The method may also be able to detect unique “small variations (micro variations) in accelerometer and/or gyroscope readings indicative of certain motions of the controller when operated by a given user.”

The raw data for Sony’s patented detection method could come from any number of sensors, including gyroscopes, accelerometers, and/or magnetometers (as found in the DualShock 4); lights tracked by a camera (à la PlayStation Move); and/or a head-mounted display (à la PlayStation VR). The data could even come from peripherals external to the actual controller, the patent suggests, such as “a wristband or armband” that tracks the user’s movement.

During gameplay, the patented system would use these sensors to measure the controller’s position, acceleration, angular velocity, orientation, motion, and the precise length of time the player pushes the controller’s buttons. The algorithm then calculates summary statistics (e.g. minimum, maximum, mean, median, variance, standard deviation, deciles, etc.) for all of these values, thus creating a profile of how that user generally manipulates the controller.

When an unidentified user picks up a controller later, the system analyzes the same controller movement data over a series of short “time buckets.” That data is then compared with the universe of known users (either locally or potentially over a server) to determine a “degree of match” for each known profile. That value is based on which combinations of data points are unique enough to distinguish that user from “the plurality of users.”

If the degree of match surpasses a certain “confidence threshold,” the system can automatically log the user in to the matched account or provide an on-screen prompt to do the same.

The patent suggests the detection algorithm could run periodically throughout a play session to detect when a controller gets handed off from one player to another, for example, or when a user picks up a controller from a table while the system is idle. When the controller is put down, the system could also immediately log the detected user out.

As with all patents, there’s no guarantee this system will ever make it into an actual marketed product, much less the upcoming PlayStation 5 DualSense controller. Based on the patent alone, it’s not even clear how far along Sony is in implementing this idea, or how accurately and quickly it would work in real-world scenarios.

Still, in a world where password-free identification methods like FaceID and fingerprint sensors are becoming standard on mobile phones, it would be nice to see some technology to smooth out the console login experience. Let’s just hope Sony keeps user privacy in mind if and when this idea does roll out to the public.

(Update: The original version of this story suggested that the patent had been approved by the USPTO, when it had actually just been published. Ars regrets the error.)