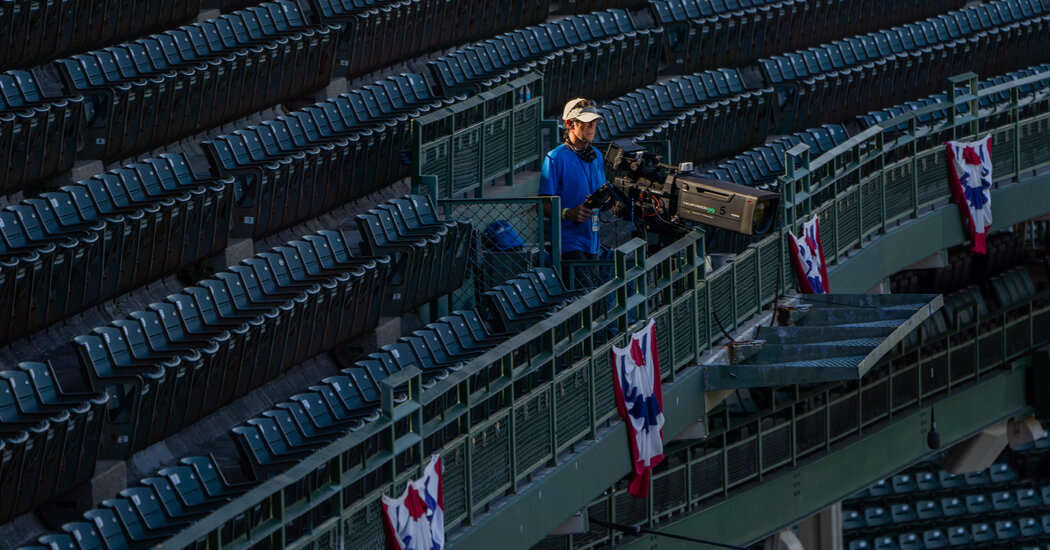 OK, it will look a lot different. There will be no fans in the stands, unless the coronavirus pandemic significantly improves, and telecasts will have crowd noise piped in. Masks will be abundant.

But baseball will also change in more subtle yet still noticeable ways, shifts that television production workers worry will become permanent and lead to a loss of jobs because of M.L.B.’s health restrictions on how many people can be in each stadium.

Baseball will adopt a “world feed” production model this season, using a single production to serve all outlets that telecast each game, rather than home and away feeds that are generally quite distinct.

“You end up with something that is either slighted, favored to one side or the other, or sterile,” said Kathy Hart, an audio technician from Houston who has worked on Astros games for decades.

Major League Baseball is the most important sport for the majority of the country’s couple of dozen regional sports networks. Its 162-game regular season forms the backbone of the schedule for most networks and allows them to charge customers a few dollars per month to get the channel, some of the priciest subscriber fees in television.

It also is a primary source of income for thousands of freelance production workers who have now gone months without a paycheck because they primarily work on sports.

“The last time I had to file unemployment was when hockey went on strike,” said Michael Sweeney, a cameraman from Los Angeles, referring to the 2012 N.H.L. lockout. “But even then I could do a handful of days in a month, and then baseball was coming.”

With few games shown nationally, compared with the N.F.L. and the N.B.A., Major League Baseball has long relied on regional sports networks to provide a robust gamecast. That has put M.L.B. ahead of the curve on media in many ways, like out-of-market streaming options that allow fans to watch a home or away feed.

Baseball’s operations manual for the 2020 season is very specific about how games can be broadcast. For each game, up to 40 broadcast personnel can work inside the stadium, and another 15 can work in a broadcast truck nearby.

The YES Network, which televises Yankees games, normally has about 25 people working in its broadcast truck during home games. Its fewer employees inside the stadium will also have to be farther from the field. Meredith Marakovits, the Yankees clubhouse reporter, will be in the second deck of the stadium, and some of the cameras in the lower deck will be robotic.

John Filippelli, the head of production and programming for the YES Network, said that in many ways, broadcasts would be more difficult. “The whole idea is to depopulate the lower level of the stadium,” he said.

The biggest challenge might be putting on a full road broadcast. While regional sports networks don’t have nearly as many workers on-site for road games — they take a number of feeds from the home broadcast — they typically hire local freelancers, like Sweeney, just for a series to customize a broadcast.

Sports and the Virus

Here’s what’s happening as the world of sports slowly comes back to life:

When Aaron Judge hits a home run on the road in, say, Washington, the Mid-Atlantic Sports Network is likely to show Nationals fans the dejected pitcher who gave it up, or a dismayed teammate. But the YES Network would show Judge celebrating. Some camera feeds, like the ones from behind home plate or in center field, would be shared, but each network would have a number of its own cameras for its respective game directors to call upon.

“Every director wants to have the ability to cut his own show with as many sources as he is used to,” said Francis O’Hern, co-director of broadcasting at the International Alliance of Theatrical Stage Employees, the union that represents many production staff members. According to M.L.B.’s operations manual, the away network will get to control only two cameras.

“When you are the home team, you command 10 cameras,” Filippelli said. “That’s why those two cameras are so critical, so you are not just mirroring” what the home feed puts out.

A spokesman for Major League Baseball declined to comment on production restrictions or any plans for future telecasts.

For those who make much of their living producing baseball games, the limited size of the crews — on top of a drastically reduced schedule — means the economic pain of the coronavirus will stretch for months, if not longer.

“I hope we’re slammed,” Sweeney, the cameraman, said last month. “I can’t wait to get slammed, but I think it will come back slowly. I think it will be a multiyear thing.”

So far, his schedule is far less busy than usual, with five away broadcasts for the Angels, and a Los Angeles Chargers preseason game that could easily be canceled as the N.F.L. and its players’ union work out details of its season.

“I am hoping more is coming,” Sweeney said, adding that he hoped M.L.B. might reconsider the number of broadcast personnel allowed in the park.

The bigger fear, however, for Sweeney and others, is that these changes are made permanent. For years, sports production has incrementally become more remote. If directors, producers, play-by-play voices and others don’t have to spend time traveling between game sites, they can work more games and fewer need to be hired.

This trend has so far mostly spared the front-of-the-line crew members. The cameras and microphones still have to be in the stadiums and arenas, with their operators usually nearby. Even with robotic cameras, somebody needs to control the camera.

But what if fans don’t notice that their baseball broadcasts are slimmed down and the regional sports network offering is less customized? What if the networks realize they can use fewer workers even when fans return to stadiums?

“Nobody wants to put on a bad show, sometimes to our own detriment,” O’Hern said. “The technicians who work broadcast sports step up and go above and beyond numerous times to make an underresourced show look bigger than it is and look better than it should look.”

Filippelli, who was preparing for the YES Network to begin showing not only Yankees games, but also the return of the Brooklyn Nets, N.Y.C.F.C. and the New York Liberty, said it was premature to make any decisions on what future seasons would look like, especially as his crews had done only a few games in months.

“I think you just have to wait and see how this unfolds,” he said, adding: “A lot of things are possible. Some things will come out of this for the better, and some things may come out of it for the worse.”