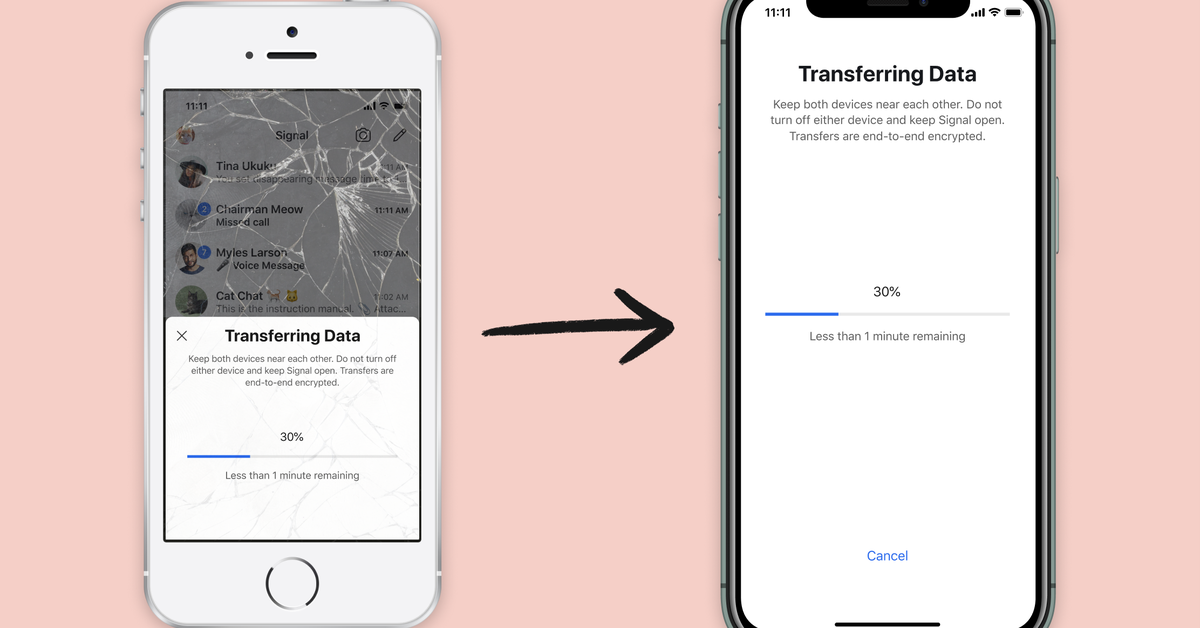 Encrypted messaging app Signal now lets you transfer your account data, including your conversation history, to a new iPhone or iPad from your existing iOS device. The feature rolled out in the app’s version 3.9.1 update last week, but the company formally announced the new feature in a blog post published on Tuesday, which also outlines the steps of how the process works. “This is the first time that upgrading to a new device without losing any information has been possible on iOS,” according to Signal.

The new process is an attempt to find a balance between convenience and security. The process works via a QR code, which your new device generates and your old device scans. Then, your devices establish a direct Wi-Fi connection (or Bluetooth if Wi-Fi isn’t available), and transfer your data through your local network without the data ever passing through a third-party cloud server. Because the transfer happens locally, even large transfers can be completed quickly, Signal says.

Secure messaging apps like Signal typically store conversations only on local devices because of the risk of compelled decryption. But this has created a long-standing problem of how to transfer logs between devices without potentially exposing all the conversations a given user has had. WhatsApp, for example, can back up your chat history to Google Drive or iCloud depending on your device, but it warns that these backups currently aren’t protected by its end-to-end encryption. iMessage backups work in a similar way: they’re encrypted if you choose to back them up to Apple’s iCloud servers. But Apple currently holds keys to those backups, and it often provides decrypted backups to law enforcement in response to valid warrant requests.

Signal’s new iOS transfer feature attempts to offer convenience, while still keeping keys in the hands of users. The connection between the two devices is end-to-end encrypted, and the app will use a variety of checks to make sure it’s only receiving the data it’s expecting. Once the process completes, you should be left with a more or less identical app on the new device.

Signal users on Android have been able to transfer their data between devices for a little while now, but the process is more convoluted and relies on you having to manually move an encrypted local backup between the internal storage of your Android devices. The new QR code-based transfer is not currently available on Android.

There are important caveats with how the new feature works that you should be aware of. The first is that you’ll need your old device if you want to transfer your Signal data from it. In other words, if you wipe your Signal data from your old phone before setting up a new one, then you’ll lose your message history. The feature also doesn’t work between iOS and Android.

This is just the latest feature that Signal has introduced that helps users transition between devices. Last month, the messaging service introduced PINs — which let you encrypt data like profile information, account settings, and who you’ve blocked — and back it up to Signal’s servers so you can restore it on a new device. Crucially, however, the functionality doesn’t let you back up conversations, unlike the new iOS transfer feature.