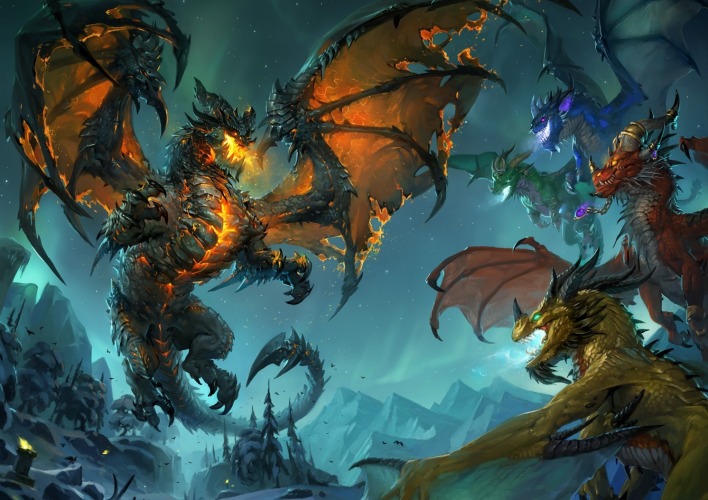 The Hearthstone developers are shaking up Hearthstone Battlegrounds quite massively today. Following the Descent of Dragons expansion of early December and its subsequent single-player adventure Galakrond’s Awakening, the autobattler mode in Hearthstone now gets to experience the wrath of the Dragon Aspects.

Aside from the five Dragon Aspects Deathwing, Ysera, Alexstrasza, Malygos and Nozdormu, Reno Jackson and Galakrond will be selectable Heroes in Hearthstone Battlegrounds. They’re not the only addition to the game mode though: a total of 18 new minions will be purchasable in Bartender Bob’s tavern. Below is a list of all the new Heroes and minions available in Hearthstone Battlegrounds when patch 16.4 drops later today.

Galakrond — Hero Power: Galakrond’s Greed [Cost 1]: Replace a minion in Bob’s Tavern with a random one from a higher Tavern Tier.

Deathwing — Hero Power: ALL Will Burn! [Passive]: ALL minions have +3 Attack.

Malygos — Hero Power: Arcane Alteration [Cost 0]: Replace a minion with a random one of the same Tavern Tier.

Cobalt Scalebane [Dragon, Tier 4] 5 Attack, 5 Health: At the end of your turn, give another random friendly minion +3 Attack.

Imp Mama [Demon, Tier 6] 6 Attack, 8 Health: Whenever this minion takes damage, summon a random Demon and give it Taunt.

Kalecgos, Arcane Aspect [Dragon, Tier 6] 2 Attack, 8 Health: After you play a minion with Battlecry, give your Dragons +1/+1.

The addition of so many new faces to Battlegrounds does mean that a couple of friendly faces will have to make way, however. Professor Putricide will no longer appear as Hero in the game mode. Additionally, Shielded Minibot, Annoy-o-Tron, Mounted Raptor, Phalanx Commander, Psych-o-Tron, Tortollan Shellraiser, Piloted Sky Golem, Festeroot Hulk, Boogeymonster, and Sated Threshadon are the minions removed.

On the balance-side of things, three changes are made. George the Fallen’s Hero Power is reduced to costing just three gold, down from four. Sneed’s Old Shredder is moved down a tier to make it more accessible. Lastly, Mama Bear is being changed from a 4/4 that gives a friendly beast +4/+4 to a 5/5 that gives a friendly beast +5/+5. The starting cost of Taven Tier 6 is being reduced from 11 gold to 10 gold too, to give players more opportunity to reach it.

To celebrate the arrival of the fire-breathers, Blizzard is activating Twitch drops on any stream running Hearthstone. Starting today until the 29th of February, 5 pm PT, anyone who consumes three hours of Hearthstone content on the streaming platform earns a free Descent of Dragons card pack. If you watch another three hours, you’ll get a second card pack for the linked Battle.net account.

From March 4 until March 17, a special questline will appear in-game. Alongside themed, special Tavern Brawls players can earn two card packs of the Rise of Shadows, the Saviors of Uldum and the Descent of Dragons expansions, plus the Year of the Dragon card back. A limited Mage bundle offers exclusively Mage cards at a discount price, and the Hero skin of Khadgar will once more be obtainable from today until March 4.

Lastly, the developers are using the update for a new and fresh experience in the Arena. Starting March 4 the available card sets in the Arena will be: Basic, Classic, Goblins vs. Gnomes, The Witchwood, Saviors of Uldum, Descent of Dragons, and Galakrond’s Awakening.