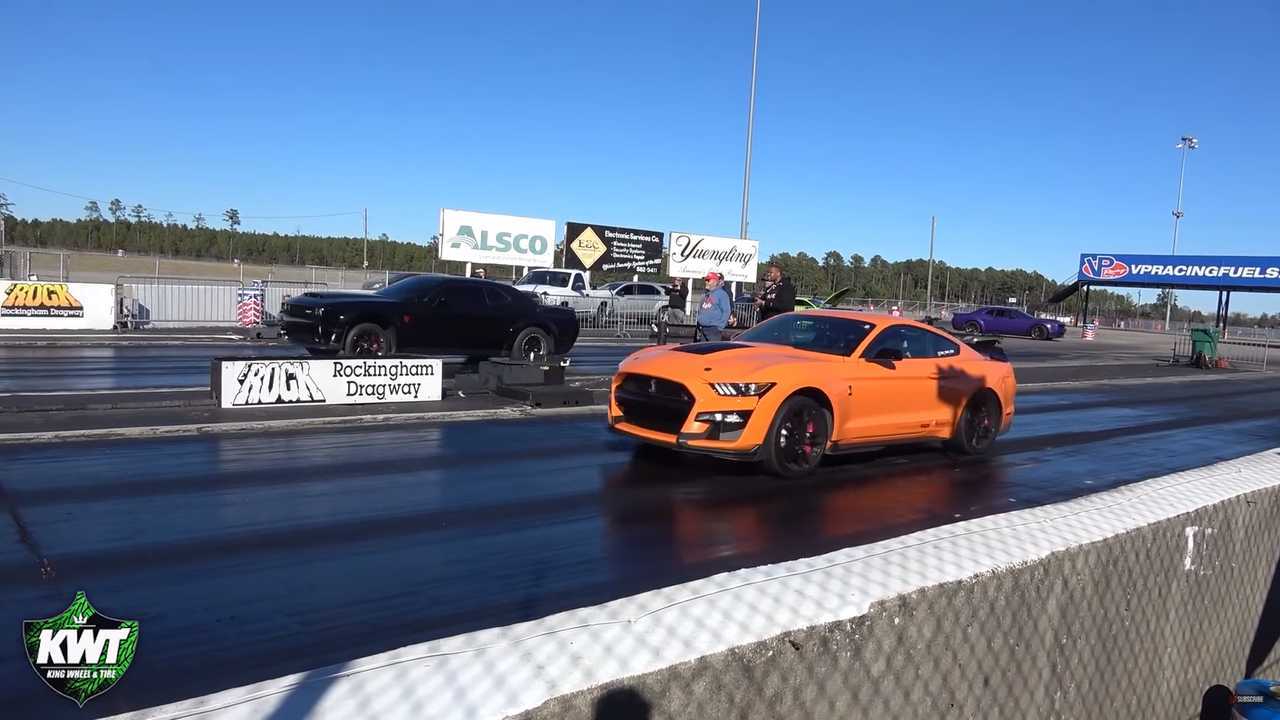 Can the tweaked Mustang banish the Demon in its natural environment?

On paper, the 2020 Mustang Shelby GT500 shouldn’t beat a Dodge Challenger SRT Demon at the drag strip. Ford officially pegs the monster Mustang as running 10.7 in the quarter and that’s been backed up by a 10.6 pass on camera. Dodge officially listed the Demon’s quarter-mile time at 9.6 seconds back when it launched, and though the world has seen very few stock Demons get close to that time, even a flat-10-second pass – of which we’ve seen aplenty – still puts the devil-Challenger well ahead.

This recent video from Demonology doesn’t pit a stock Shelby against a Demon, however. The orange GT500 in this contest is modified, while the Demon is bone stock and running a full interior to boot. We don’t know the nature of just how this GT500 is tweaked, as the 17-minute video only makes a very brief mention of a tune. We also don’t know how much horsepower the Ford is producing, but presumably it’s more than the stock rating of 760 ponies.

Save Thousands On A New Ford Mustang

If pitting a modified Shelby against a stock Demon sounds like an unfair fight, there’s arguably some balance when it comes to tires. The Demon struts its stuff at the strip with sticky drag radials, whereas the GT500 is still running street tires on 20-inch wheels. We say arguably here not because this levels the playing field, but because it gives the Demon a tremendous drag strip advantage.

All the power in the world is useless unless you can put it to the ground, and we won’t even try to be witty or coy about the outcome here. The Mustang loses two races badly. The launches for both cars tell the tale – on drag slicks the Demon leaves the starting line like a missile with a 1.3 60-foot time. The GT500 can only manage a 2.0 60-foot time, which is a number achievable by cars with less than half the Shelby’s power. At the other end of the track, however, the GT500 is considerably faster with a 144-mph trap speed versus 132.8 for the Demon.

Never the less, quarter-mile drag races are won or lost on the starting line, and pavement-wrinkling launches with the front tires in the air is exactly what the Demon was built to do. This round, then, goes to Dodge.