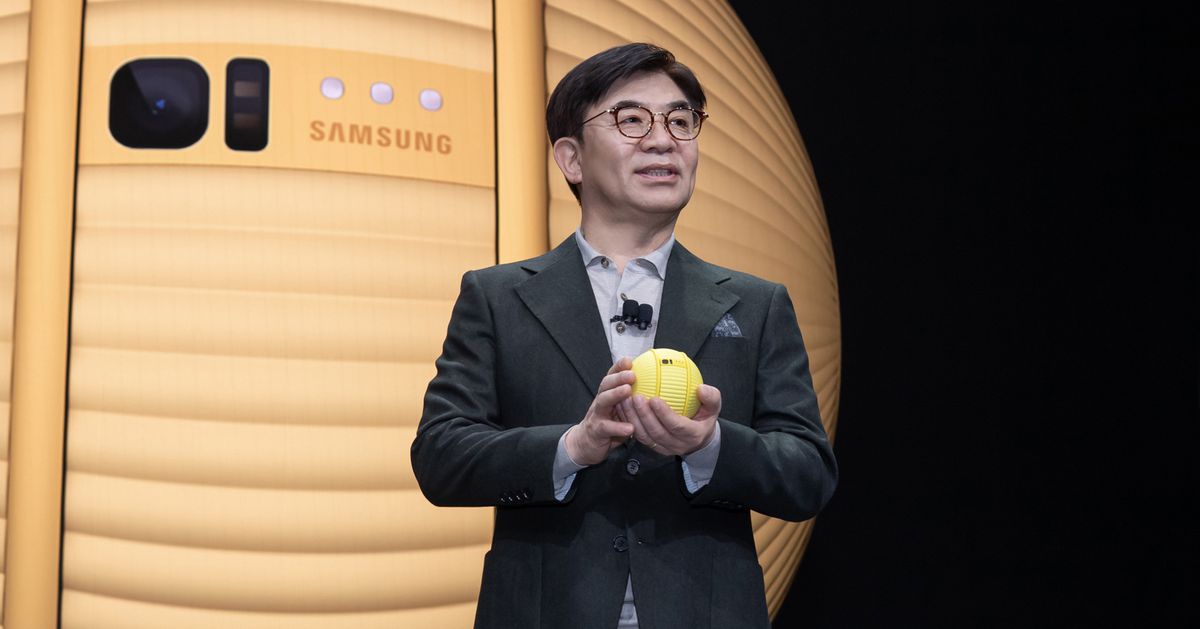 Today, at Samsung’s keynote at CES, Samsung introduced Ballie, a small ball-shaped robot intended to help you around the house. Samsung says Ballie utilizes AI to be a security robot, a fitness assistant, a tool to help seniors connect with smart devices in their homes, and it can even be a friend to your kids and pets.

In an onstage demo, Ballie followed Samsung consumer electronics division CEO H.S. Kim on the stage by rolling around, seemingly by using the camera to track Kim as he walked across the stage. Ballie also gave cute little robotic chimes in response to a couple of commands from Kim, and it even rolled right into Kim’s hands when he called for it.

Rolling around and following people seems to be all that Ballie can do at the moment. But in a promotional video aired shortly after the demo, Samsung showed a bigger vision for Ballie that could someday make it more of an at-home assistant. Ballie opened the blinds in its owner’s home, turned on the TV so that the house’s dog could have something to watch, and summoned a Roomba-like vacuum to help clean up a mess.

Samsung isn’t the first to make robots billed as at-home companions. Sony, for example, recently released APIs for Aibo, its robot dog, that will apparently let you make services and applications for Aibo that let it interact with smart home devices. Below is a concept video of what might be possible with those APIs. Some of the scenarios shown are quite similar to what Samsung is proposing with Ballie.

There’s also a chance that Samsung may run into some of the issues other companies have faced when trying to sell commercial robots. Remember Sphero, the company that actually sold a BB-8-like robot? The company just didn’t sell enough toy robots, forcing it to stop making licensed robots in December 2018 and pivot to making robots for education. Toy robot company Anki shut down in April last year after running out of money, and just yesterday, it was announced that Anki’s assets were bought by an ed-tech firm, meaning that Anki’s Vector robot will live on. And don’t forget about Rolly, Sony’s ridiculous-looking “sound entertainment player” robot that cost $400 when it came out in 2007 and could only get music loaded onto it with Sony’s proprietary Sonic Stage application.

Samsung didn’t share any information about when Ballie might come out or how much it might cost when it’s available, so it’s hard to know if we can ever get the chance to see if it will live up to Samsung’s bold vision that it presented at CES. But for now, it at least looks like a cute little robot that could be a companion around the house — that is, if it’s something you’ll actually be able to buy.