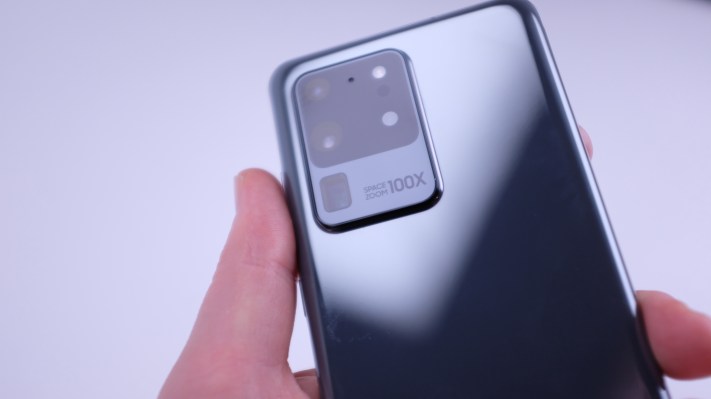 Flagship prices that routinely top out well above $1,000 are among the chief factors in slowing smartphone adoption. Certainly Samsung has done something to address the phenomenon, both with a number of mid-tier products and the recent introduction of Lite versions of the Galaxy S10 and Note 10.

At the other end of the spectrum is the brand new Galaxy S20 Ultra. Having already broken the seal on a $2,000 handset with last year’s Galaxy Fold, the company just announced the somewhat more reasonable $1,400 Ultra. The most premium of the thee-tier devices sports a massive 6.9-inch display to the others’ 6.7 (S20+) and 6.2 (S20).

The camera is the other place the Ultra really sets itself apart from the others. All devices feature enhanced “Space Zoom,” but the premium product bumps the 30x up to a massive 100x, through a hybrid of optical and digital zoom, with a folded lens beneath the large camera bump on the rear.

Like the S20+, there’s a four-camera system on the rear (the standard S20 just has three). There are some differences in sensors in the group, including, most notably, the S20+ wide angle, which is bumped up to a massive 108 megapixels.

The Ultra is also the first device to include nona binning, which knocks the normally excessive 108-megapixel camera down to 12 megapixels, while retaining the large amounts of light let in by the sensors for improved photos.