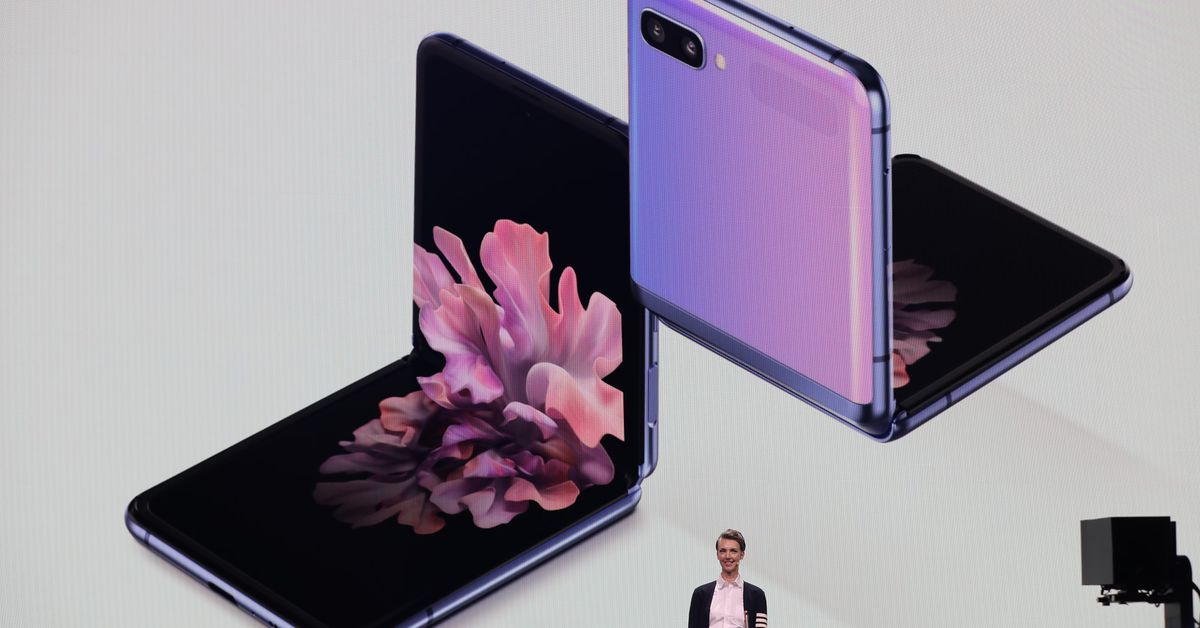 Samsung is unveiling its latest foldable Galaxy Z Flip phone today. It looks a lot different than the troubled Galaxy Fold, and it folds up much like the new Motorola Razr. It’s clearly designed to be a full phone with a 6.7-inch OLED display that folds and shrinks into a much smaller square when it’s closed. Samsung is planning to launch the Galaxy Z Flip on February 14th, priced at $1,380.

Think of it as a tiny phone that slips into a pocket or bag and can be folded out like a regular flip phone. The Galaxy Z Flip also includes a clever 1.1-inch OLED cover display that highlights notifications when the device is closed, and you can tap on them to get straight into apps once you unfold it again. You can even use this cover display as a viewfinder for the camera.

The Galaxy Z Flip weighs 183 grams and is powered by Snapdragon 855 Plus processor, 8GB of RAM, and 256GB of storage.

Samsung says it’s using an ultra-thin glass on its 6.7-inch display, which folds and will last for 200,000 folds. It’s called the “Infinity Flex Display,” and includes Samsung’s proprietary bendable Ultra Thin Glass (UTG). There’s no notch or cutout, and Samsung is using the unusual 21.9:9 aspect ratio on this 6.7-inch display (2636 x 1080, 425ppi).

Samsung has also built a three-stop hinge that lets you separately use two halves of the screen when it’s propped up. It works much like a laptop, with a dual CAM mechanism to hold it open at a range of angles. The idea is you can sit the phone on a flat surface and take a selfie with the camera shown on the top portion of the display, and controls on the bottom half of the screen.

Naturally, there are growing concerns over foldable phones after the Galaxy Fold issues, and Samsung addressed this onstage today. The Galaxy Z Flip’s hinge “prevents dust” from getting inside, and Samsung has developed special fibers to keep dust out. We’ll have to test the Galaxy Z Flip fully to see if this new hinge design lives up to Samsung’s promises.

A foldable phone wouldn’t be a smartphone without a camera, and Samsung is including three. At the front, there’s a 10-megapixel f/2.4 selfie camera, and at the rear, there’s a dual-camera system with a 12-megapixel ultrawide and a regular 12-megapixel wide-angle camera. The rear camera system includes the ability to shoot night Hyperlapse videos or low light shots with Samsung’s night mode.

The real promise of the Galaxy Z Flip is the software experiences, though. The 6.7-inch display will automatically split into two 4-inch screens in something Samsung calls “Flex mode.” Samsung has worked closely with Google to design Flex mode, a custom UI that’s designed for viewing images or YouTube videos.

Samsung is also enabling multitasking on the Galaxy Z Flip with multi-active window support, so you can drag and drop multiple apps to display at the top half and bottom half of the display.

Surprisingly, Samsung is planning to release this new Galaxy Z Flip in the US and Korea on February 14th in purple and black variants priced at $1,380. A gold version will also follow in “select countries” soon.