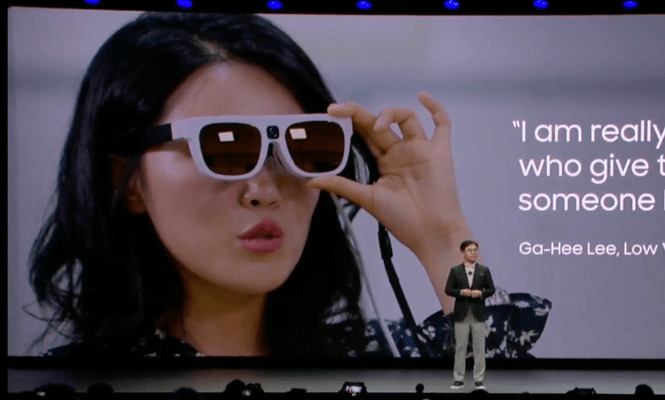 What a weird Samsung press conference. The company didn’t waste time on the familiar. Things like Galaxy phones and washing machines got little love onstage tonight. Instead, the company was focused on a workout exoskeleton and a friendly robotic call assistant.

And then there was AR. The technology was more hinted at than outright explained. First it took part in the aforementioned GEMS workout, in which the wearer took out her pair of “Samsung AR glasses.” That demo involved an AR assistant that was, admittedly fairly creepy.

The subject was dropped a bit, only to come back to it a little while later. First there was an uplifting video featuring Gear VR headsets repurposed to help vision impaired users see their loved ones (definite tear jerker material), followed by what appeared to be a different take on the AR glasses, complete with a camera in the middle of the frames.

Of course, we need to use the same caution here that we have with all of the other strange stuff shown off onstage tonight: these are all prototypes. At best, it’s a potential roadmap. At worst, it’s speculative fiction. Either way, I wouldn’t wager a good deal of money on the company replacing Gear VR with a pair of AR sunglasses this year.

That said, given larger industry trends, it’s completely understandable why the company is exploring such potential paths.