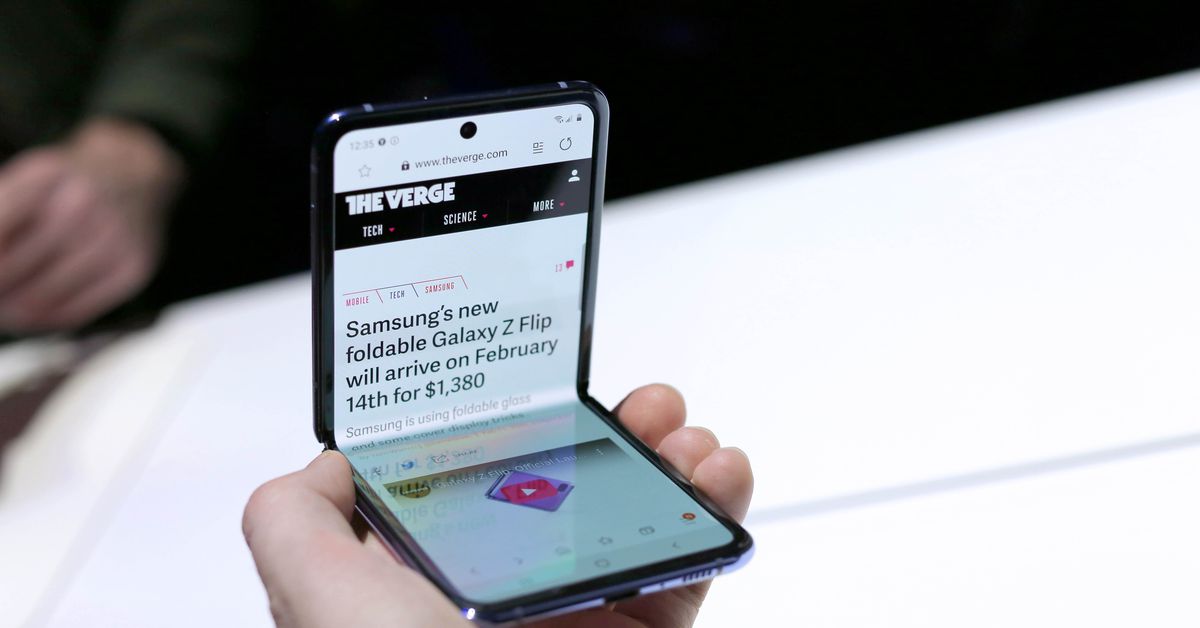 Samsung just unveiled the Galaxy Z Flip, its second folding phone. This phone’s big improvement over foldables to date is the use of a glass screen, and it definitely feels a whole lot nicer. It feels like glass, and it can’t be easily marked up by a fingernail like the plastic screens used to date. I tried my darndest to see the crease in the hands-on area and while I could see it, it wasn’t easy. Of course, we were in a somewhat controlled and completely chaotic and crowded situation, so don’t hold me to that long term.

The phone has a strong hinge, and that comes with some ups and downs. On the upside, it can hold itself open in any position. It opens smoothly, doesn’t creak, and and feels pretty good overall. On the downside, the phone is harder to open. It doesn’t flip open like a classic clamshell phone. Opening it with a single hand takes a lot of work, so you’ll probably be using two most of the time.

I really can’t emphasize enough how different the Z Flip feels from the Galaxy Fold and the Motorola Razr. It is very much refined — with no creaking, a more solid-feeling hinge, and just a smoother action throughout. I’m not 100 percent sold on having the hinge provide so much resistance, but I do think Samsung has figured some of its folding problems out. It’s a shame the first introductions to folding phones were so compromised, because this seems really promising.

Promising — but that doesn’t mean good. The original Galaxy Fold and even the Motorola Razr seemed pretty good in their initial hands on only to disappoint in actual use (spoiler for my upcoming Razr review there, btw). So don’t consider this an endorsement at all — and the fact that Samsung is throwing this thing out into the market on Valentine’s day without preorders or reporter previews could be seen as a bad sign.

A lot of other drawbacks to early foldables have been improved here. The gap around the hinge is still there, but smaller. The inside bezels look smaller, too. And the crease where the screen folds is barely visible, though you can still feel it. It’s way better than what you’ll find on Motorola’s Razr, which has a plastic screen.

The tiny front facing screen is absolutely adorable, if you double press the power button (which doubles as a fingerprint sensor), you can launch the selfie camera and see yourself. More practically, it can be used to show the time and some notifications. Samsung says when you tap on a notification on the tiny screen, it opens up in the app when you open the phone — but that wasn’t working on the demo floor.

Samsung’s reasoning for making the hinge so stiff is that you can set the phone down at an angle and do split screen things. I think this is of dubious usefulness, but we’ll see which software supports it. I was able to test it with Google Duo video chatting and with YouTube. On Duo is made a ton of sense, but on YouTube the function was letting you look at the comments — which, okay.

The Z Flip is Samsung’s first shot at getting a foldable right after the messy launch of last year’s Galaxy Fold. The Z Flip has a few key differences: it folds open and closed like a classic clamshell phone, rather than like a book; it uses a bendable “Ultra Thin Glass” display, instead of the weak plastic on the Fold; and it has fibers built into the hinge to prevent dust from getting in and damaging the display, which is what broke early units of the Fold. Samsung says the new glass will last for 200,000 folds.

There are two 12 megapixel cameras on the back, a regular wide angle and an ultra-wide angle, and on the inside is a 10 megapixel selfie camera that’s cut out in the top of the display. The Z Flip supports wireless charging and runs a customized version of Android 10. Notably, the phone does not support 5G, unlike the new Galaxy S20 series of phones.

The phone will be available in the US and Korea starting February 14th for $1,380.