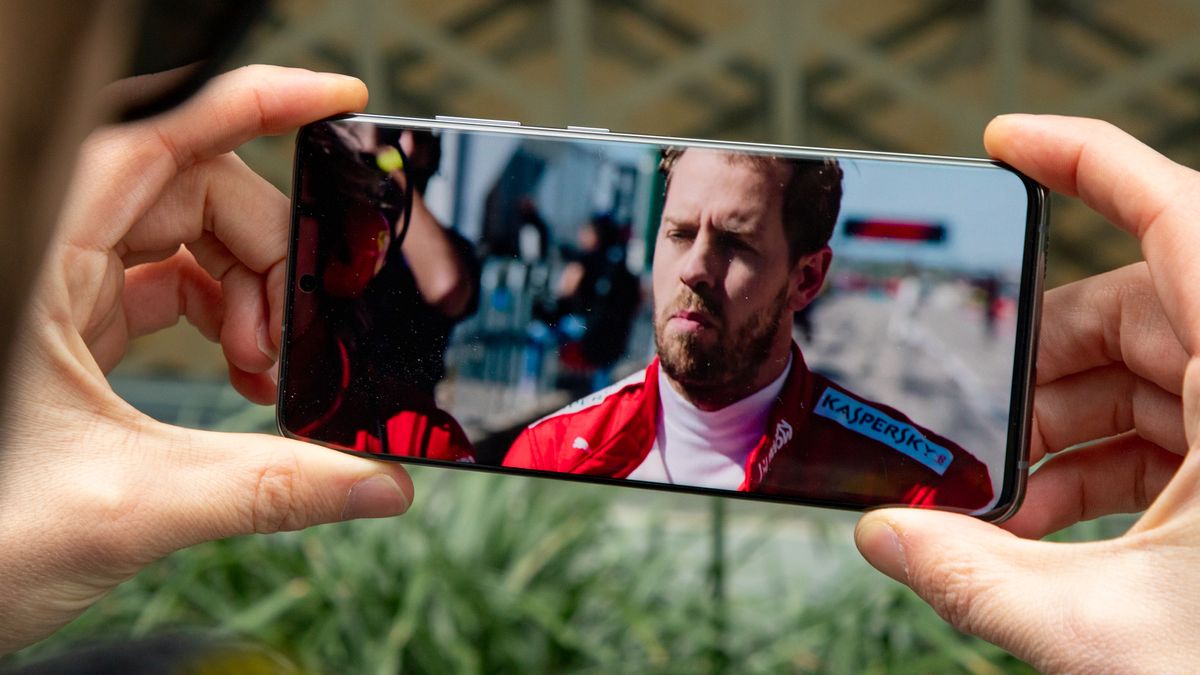 The Galaxy S20 Ultra still can’t top Apple’s latest iPhones for performance. But the gap between the leading Android phone and Apple’s pace-setting flagships is more narrow than it was before Samsung’s latest phone came along.

That’s our takeaway after we had a chance to benchmark the Galaxy S20 Ultra, which is now available for pre-order in advance of its arrival in stores on March 6 along with the Galaxy S20 and Galaxy S20 Plus.

The Galaxy S20 Ultra, like the other members of the S20 family, runs on a Snapdragon 865 system-on-chip from Qualcomm. The Kryo 585 CPU in this new chipset promises a 25% performance improvement over last year’s Snapdragon 855 along with a 25 percent boost in power efficiency. Qualcomm says to expect a 25% improvement in graphics rendering over the previous generation from the Adreno 650 GPU included with the Snapdragon 865.

Along with the faster processor, the Galaxy S20 Ultra also benefits from 12GB of RAM. Last year’s Galaxy S10 and Galaxy S10 Plus featured 8GB in their base models (though you could pay up for an S10 Plus with 12GB of memory if you wanted).

Our testing definitely shows that the Snapdragon 865-powered Galaxy S20 Ultra delivers the best performance ever in an Android phone, beating last year’s pace-setting devices quite handily in most benchmarks. And while the A13 processor Apple uses in its iPhone 11 lineup still has the better numbers, the Galaxy S20 Ultra is at least in the same ballpark. (Previous Android phones were lucky to be in the parking lot outside the ballpark.)

Here’s a closer look at our Galaxy S20 Ultra benchmarks.

Geekbench 5 is a good indicator for a phone’s overall performance, and the Galaxy s20 Ultra turned in standout numbers on this test. Samsung’s new phone tallied a single-core score of 805 and a multicore result of 3,076.7. Compare that to the Galaxy Note 10 Plus, which features a Snapdragon 855 processor while matching the S20 Ultra’s 12GB of RAM — Samsung’s older phone had a single-core score of 736 and multicore result of 2,691. That means the Galaxy S20 Ultra improved on those numbers by 9% and 14%, respectively.

The performance gains are bigger when you compare the Galaxy S20 Ultra to a phone without as much memory. The Pixel 4 XL features a comparatively modest 6GB of RAM to go along with its Snapdragon 855 chipset. Google’s phone produced a multicore score of 2,582, so the Galaxy S20 Ultra improved upon that result by 19%.

The Galaxy S20 Ultra’s numbers didn’t match the higher scores we got when we tested a Snapdragon 865-powered reference device in December, though we tested that device in a performance mode that prioritized performance over battery life. That phone got within 2% of the iPhone’s Geekbench 5 score. We imagine Samsung did some tweaking to the chipset so that it could deliver solid performance while still managing to keep the 6.9-inch phone powered up.

The story here, though, is how much better the Galaxy S20 Ultra compares to the iPhone relative to last year’s top Android phones. The OnePlus 7T, for example, produced one of the best multicore results we saw from an Android device in 2019 at 2,759, but the iPhone 11 Pro Max still outperformed it by 27%. The Galaxy S20 shortens that lag considerably.

We saw more evidence of the gains that Samsung has made in a real-world test we like to perform using Adobe Rush. In this test, we time how long it takes to transcode a 4K video to 1080p after applying an effect and transition.

Apple’s phones historically smoke all comers in this test, with the iPhone 11 Pro Max taking just 45 seconds to complete the job. And that’s not a number the Galaxy S20 Ultra can match, as it finished the process in 1 minute, 16 seconds.

Still, that’s a solid result for the Galaxy S20 Ultra when you consider the track record of leading Android phones on our test. The Pixel 4 takes 1 minute, 31 seconds to transcode that video clip, while the Note 10’s time is three seconds slower than that. So the newer processor and extra RAM in the Galaxy S20 Ultra helped it shave 15 to 18 seconds off the time of last year’s flagship Android handsets.

As in the rest of our benchmarks, the Galaxy S20 Ultra showed decent gains over last year’s top Android phones, though the iPhone continues to be at the front of the pack. In GFXBench’s Aztec Ruins Vulcan test (offscreen), the S20 Ultra produced 1,319 frames, or close to 21 frames per second. The iPhone 11 Pro Max was far ahead with 1,657 frames, or 25 fps.

But compare the Galaxy S20 Ultra’s numbers to those from other Android flagships. Both the OnePlus 7T and Galaxy Z Flip use the graphics-boosting Snapdragon 855 Plus chipset, but their respective scores of 1,169 and 1,124 frames were both behind the S20 Ultra’s results. And the Note 10 Plus lagged the field with 1,058 frames, or 15 fps.

You’d expect a new flagship phone to top last year’s models quite handily, and on that front, the Galaxy S20 delivers. And while Samsung’s phone is a better match for the top iPhone, some might have expected a $1,399 to narrow the performance gap even further — especially since the A14 chipset that’s likely to power this fall’s iPhone 12 models will set a new standard.

Still, the gains we’ve seen the Galaxy S20 Ultra make in some of our real-world tests are encouraging. And given the major camera improvements Samsung has introduced to the S20 Ultra, performance is just part of the picture for justifying this phone’s four-figure cost.