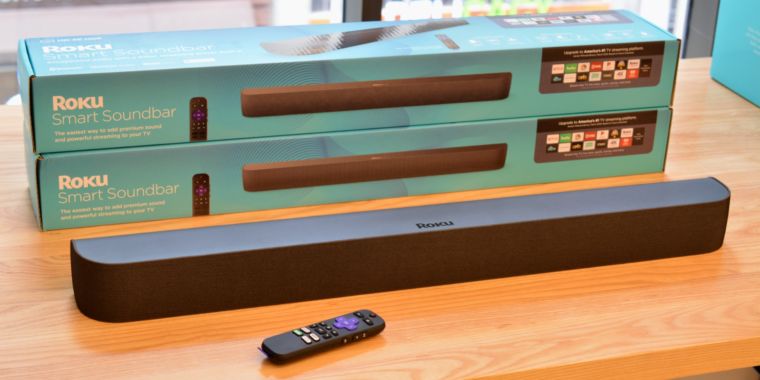 Streaming giant Roku continues to lean heavily into the audio side of home entertainment. Today, the company announced that it is bringing surround sound capabilities to its Roku Smart Soundbar through a software update that will start hitting devices this February.

The surround sound expansion will let users connect other Roku audio devices to the smart soundbar wirelessly. Currently, Roku has a wireless speaker bundle designed to work with Roku TVs and a wireless subwoofer that connects via Wi-Fi to Smart Soundbars already. Users will be able to connect a pair of the wireless TV speakers to the smart soundbar to create a surround sound system that they can control through the Roku remote they already have.

Roku emphasized the ease of use of this smart surround sound system, saying that the technology embedded into the smart soundbar will identify the TV speakers automatically at the start of the setup and will pair with them wirelessly. Users can then choose the position of each TV speaker in their homes, properly directing the sound that comes out of each speaker. Once set up, users can control the whole system with the remote they already use with their Roku device. There will also be new stereo sound modes that users can equip to make non-surround-sound audio sound even better through their new speaker setup.

The surround sound feature hinges on the smart soundbar—which Roku introduced last year as a home theater audio device that would be better than most users’ TV speakers—as well as a Roku streaming device. The technology found in a Roku Ultra lives inside the smart soundbar as well, so those with “dumb” TVs essentially get two devices in one. In addition to working as your TV’s main speaker, the smart soundbar also has Bluetooth technology so you can connect a smartphone, tablet, or another device and stream music from it to be played through the soundbar.

The smart soundbar is a type of convenience product in itself—the world of soundbars can be quite difficult to navigate, so Roku made a device that will likely satisfy those who want a generally better TV audio experience as well as a streaming device to add to their existing TV. The new surround sound system expands on this idea, giving users who want a more immersive audio experience the option to have one with Roku devices but without the hassle that comes with building your own surround sound system from the ground up.

Currently, the feature will only work when the smart soundbar has Roku speakers connected to it. That means you can’t pair any third-party audio devices and get the same effect. It’s a disappointing limitation, especially considering audio devices should only need HDMI ARC to work with the smart speaker, but it’s understandable at the outset. A fully equipped system, then, will be anchored by a Roku smart soundbar that’s connected wirelessly to a pair of Roku RV speakers and the Roku subwoofer. Roku is hoping to glean more customers by having them invest in its audio devices as well as its streaming technology.

Roku Smart Soundbar users can expect to get access to the new surround sound feature when it begins rolling out in February via a software update.