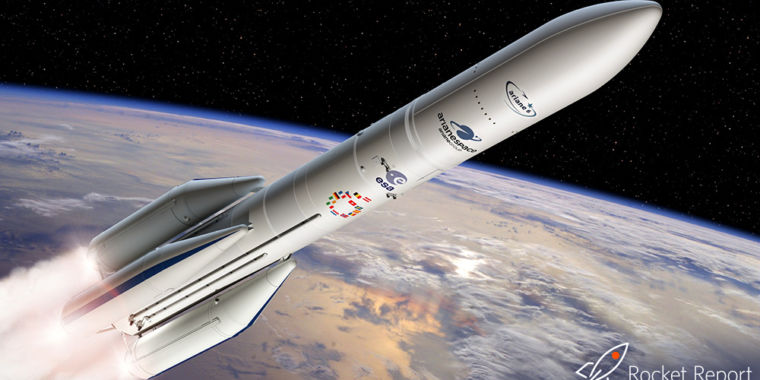 Welcome to Edition 2.36 of the Rocket Report! We’ve returned after a week off, into the midst of a global pandemic, with the longest report ever. So enough of this preamble, and let’s jump right into the news.

As always, we welcome reader submissions, and if you don’t want to miss an issue, please subscribe using the box below (the form will not appear on AMP-enabled versions of the site). Each report will include information on small-, medium-, and heavy-lift rockets as well as a quick look ahead at the next three launches on the calendar.

Momentus and SpaceX team up for rideshare. When Momentus purchased rides on five SpaceX Falcon 9 smallsat rideshare missions in 2020 and 2021, it wanted to showcase the ability of its Vigoride in-space transportation vehicle to move customer satellites 300 to 1,200 kilometers beyond the drop-off point, SpaceNews reports. “By ferrying payloads to multiple orbits from a single launch, we multiply the capability of an already impressive system that has revolutionized access to space,” Momentus CEO Mikhail Kokorich said.

Hitching a ride … Prior to the launches, Momentus will mount multiple customer satellites weighing a total of 350 kilograms or less on Vigoride space transportation vehicles. After separation with the Falcon 9, Vigorides will deliver each satellite to its intended orbit and altitude, company officials said. Needless to say, this has the potential to remove one obstacle to rideshare launches—the inability of small satellites to insert into preferred orbits. (submitted by Ken the Bin)

But small launch firms don’t see a price war? Small-launch-vehicle developers say they don’t see a “race to the bottom” for launch prices despite the large number of companies developing vehicles and the emergence of new rideshare options, SpaceNews reports. “What we’re offering is flexibility in launch,” said Lars Hoffman, senior vice president of global launch services at Rocket Lab. “What we’re hearing from the market and what we’re hearing from our customers is they like to have options.”

A variety of business models … Small-launch-vehicle companies counter that they can provide better and more responsive launch services than rideshare options. “We’re already seeing the types of satellites, the orbits they’re going to and the need for responsiveness only increasing,” said Monica Jan, senior director of strategy and customer experience at Virgin Orbit. “There’s a whole variety of business models and responsive launch services that’s needed that’s not even happening today.” We think this question of whether there’s a price war has yet to be answered. (submitted by Ken the Bin)

The easiest way to keep up with Eric Berger’s space reporting is to sign up for his newsletter, we’ll collect his stories in your inbox.

A critical peat bog … Povlsen and other opponents discount the economic potential of the plan and, according to Bloomberg Businessweek, dismiss the facility as a greedy, shortsighted grab at land that’s vulnerable to climate change and a key bulwark against it. The proposed spaceport site comprises 800 acres of Europe’s largest peat bog, an ecological system that stores approximately 400 million tons of carbon beneath its surface and plays host to protected fauna, including golden eagles and black- and red-throated divers. A well-funded, serious opposition to the spaceport seems like real trouble for the project. (submitted by JohnCarter17)

Rocket Lab to acquire smallsat company. The US-based company said this week that it will acquire Toronto-based Sinclair Interplanetary for an undisclosed sum. Founded in 2001 by Doug Sinclair, the company builds components such as reaction wheels and star trackers for small satellites. Sinclair’s hardware has now flown on approximately 100 satellites, SpaceNews reports.

Building up capabilities … Rocket Lab said that it will use Sinclair systems on its Photon line of smallsat buses and that it will provide resources for Sinclair to scale up production of those components for sale to others. “Doug Sinclair and his team at Sinclair Interplanetary are recognized as industry leaders and, like Rocket Lab, they produce best-in-class solutions that satellite operators know they can count on,” Peter Beck, chief executive of Rocket Lab, said in a statement. (submitted by JohnCarter17)

“NASA Certification is a significant achievement for our team and testament to our unwavering commitment to reliable and cost-effective launch for small satellites,” said Rocket Lab founder and Chief Executive Peter Beck. This is just one more step that the company has taken ahead of its other competitors in the small-satellite launch race. (submitted by DanNeely and Ken the Bin)

Leo Aerospace suspends its operations. A startup developing a balloon-borne small launch vehicle has gone into “hibernation” after struggling to raise money, a fate that may be facing many other companies in the sector, SpaceNews reports. In a March 13 letter to the company’s investors and other associates, Leo Aerospace said challenges raising funding and concerns about market timing led the startup to decide to suspend operations, with the understanding that it may never resume work.

COVID-19 likely to hit small businesses hardest … “Fundraising proves increasingly difficult as investors place greater emphasis on revenue-generating businesses with shorter time horizons,” the company stated. In addition, the company had yet to receive a decision on a US Air Force Small Business Innovation Research grant it applied for last year. “After a four-month delay, we are at the end of our financial capacity.” This is unfortunate but not unexpected. We’ll see more of this as the financial recession deepens. (submitted by Ken the Bin)