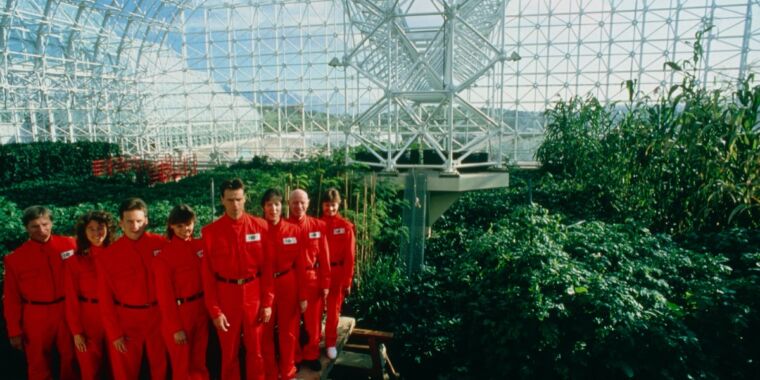 In September 1991, amid much media fanfare, eight people entered a closed experimental facility called Biosphere 2 for a two-year stint in total isolation. They endured hunger, a dangerous rise in CO2 levels, interpersonal squabbles, a media backlash, and sharp criticism from the scientific establishment. Today, most people might recall Biosphere 2 as a colossal failure. But the truth is much more nuanced than that, as we learn in Spaceship Earth, Director Matt Wolf’s self-described “stranger than fiction” documentary about the controversial experiment. The film made a splash at Sundance earlier this year, and is now available for streaming on Hulu, Apple TV, and other select platforms.

Biosphere 2, a 3.14-acre facility located in Oracle, Arizona, has a long, colorful history tailor-made for the documentary treatment.  Built between 1987 and 1992, its original objective was to be an artificial, fully self-sustaining closed ecological system—a large-scale vivarium, if you will. (It was called Biosphere 2 because the Earth itself is the original biosphere.) There were seven distinct “biome” areas: a rainforest, an ocean with living coral reef, a savannah grassland, a fog desert, mangrove wetlands, an agricultural system (i.e., a small farm), and a human habitat.

Spaceship Earth delves deep into the roots of the project, going back to the 1960s, when John Allen and several cohorts (some would later deem them cultish followers) moved from San Francisco to New Mexico and founded a commune called Synerga Ranch. They were inspired by surrealist/spiritualist French novelist René Daumal, among others, as well as Buckminster Fulller’s Spaceship Earth. They even built their own geodesic dome on the ranch, the better to hold communal gatherings and stage amateur theatrical productions. (They would later tour as the Theater of Possibilities.)

Once the ranch became self-sufficient, Allen grew bored and moved his core group to Berkeley, where they built a ship called the Heraclitus on the Oakland shore. Miraculously, given their lack experience, the Heraclitus proved seaworthy. Under the umbrella of what would become the Institute of Ecological Technologies, they also founded several successful business ventures around the world, in partnership with Ed Bass, the heir to a massive Texas oil fortune who was among those drawn to Allen and Synerga Ranch.

All that is prologue to Allen’s idea for Biosphere 2, inspired in part by the strong environmental themes of the 1972 post-apocalyptic film Silent Running. In that film, all plant life on Earth is becoming extinct, and a group tries to preserve as many specimens as possible in greenhouse-like geodesic domes, attached to a large spaceship just outside the orbit of Saturn. For his real-world project, Allen envisioned an enclosed, completely self-sufficient structure on Earth that could serve as a test module for setting up a colony on the moon or Mars.

That first two-year experiment produced mixed results. The biospherians managed to grow or produce 83 percent of their food, especially as their farming skills improved, but hunger was constant. A few ants and cockroaches snuck into the ecosystem before it was sealed, and over time threatened the crops. Just 12 days in, biospherian Jayne Poynter accidentally cut off the tip of her finger in a threshing machine while winnowing rice. She had to be temporarily evacuated for surgery, returning a few hours later. But she brought back a duffel bag—purportedly containing circuit boards, plastic bags, and a planting plan—which fueled media speculation that she was sneaking in food, and that the grand experiment had already been compromised.

Most seriously, oxygen levels began falling precipitously, down to just 14.5 percent (what one might experience at an elevation of 13,000 feet). When the team’s medical doctor became so impaired that he could no longer add columns of numbers, the managers intervened, pumping in pure oxygen to restore the balance. It was later determined that the primary culprits for rising CO2 were microbes in the enriched soils, which produced CO2 faster than the plants could produce oxygen. Making matters worse, the unsealed concrete in the habitat reacted with the CO2 to form calcium carbonate, effectively sequestering both oxygen and CO2.

The low oxygen levels no doubt contributed to the interpersonal tensions and overall low morale; ultimately the biospherians split into two factions that weren’t speaking to each other when they finally emerged after two years. But despite the infighting, they still managed to continue to cooperate for their shared survival. The same could not be said for management. Rifts emerged over the focus of the research, and Bass (frustrated by the massive cost over-runs, among other issues) ultimately took out a restraining order and ousted Allen and his team with the help of several police officers.

Some considered Biosphere 2 to be little more than “ecological entertainment.”

While Allen brought on several professional scientists as consultants for various aspects of the project, there were still those who considered Biosphere 2 to be little more than “ecological entertainment,” or, more harshly, “New Age drivel masquerading as science.” One early critic was Ghillean Prance, director of the Royal Botanical Gardens in Kew, who initially dismissed the project and claimed Allen et al.’s “interest in science is not genuine.”

But Prance later changed his tune, impressed by the group’s organization and passion, and went on to design the rainforest biome.  “You shouldn’t hold their past against them,” he told the Phoenix New Times in 1991. Independent scientific assessments in 1992 and 1994 concurred that the project was a legitimate laboratory for investigating relevant ecological questions. Nonetheless, in 1999 Time included Biosphere 2 in a list of the 100 worst ideas.

There is much to like about Spaceship Earth. Given all the controversies that have erupted over the years, it’s an inherently fascinating topic, and Wolf approaches it with an even hand, whether he’s portraying the group’s early days as rather naive idealistic dreamers, or chronicling the inevitable pain of disillusionment. Wolf has captured the essence of why Biosphere 2 proved to have such a strong hold on the public’s imagination—and just how impressive it was that Allen and his group managed to pull it off at all.

It’s easy to sneer at their hippie roots, or cringe at the amateur theatrics of the Theater of Possibilities, but you have to admire the ingenuity and sheer chutzpah of these people. The fact remains that they took on a daunting challenge and (mostly) got it done. There were setbacks and disappointments, but we really did gain some valuable knowledge from Biosphere 2. (Sadly, much of the original data collected from that two-year experiment has never been analyzed, and may be lost. ) As for the cult accusations, Allen is still living on Synerga Ranch with several members of that original group—friendships that have endured for some 50 years. Cults aren’t typically that enduring.

That said, at nearly two hours, Spaceship Earth is overlong; it would work better at a more nimble 85-90 minutes. It also hews a little too closely to a strict chronological timeline. After a short introductory 1991 segment, Wolf jumps back 25 years and spends a big chunk of the film reminiscing about the group’s earliest days. That period is vital to provide context for Biosphere 2, but it’s also frankly the least interesting. The material could have been trimmed back substantially—possibly even sprinkled throughout the documentary as flashbacks when that context was relevant—while still making Wolf’s major points.

Spaceship Earth ends rather abruptly with the premature termination of the second Biosphere 2 mission (which did manage to achieve total food sufficiency with no need for oxygen injections), the ousting of the original management team by Bass, and the dissolution of Space Biospheres Ventures. It spends very little time on what’s become of the facility since then. Biosphere 2 is no longer a closed system experiment. Columbia University switched the research focus to that of a “flow-through” system when it took over operation in 1995, using it to manipulate and study shifting CO2 levels for global warming research—notably the impact of high CO2 levels and ocean acidification on coral reefs.

Today, Biosphere 2 is owned and operated by the University of Arizona. Some of the older structures outside are a bit worse for the wear, like the old test module and original quarantine labs.  But solid science is still being done on-site, and Ed Bass continues to supply occasional funding, most recently donating $30 million in 2017.  The projects are smaller and more focused, including a lunar greenhouse, designed to explore how to grow vegetables on the moon or Mars; a vertical farming project constructed in Biosphere 2’s west lung; and a Landscape Evolution Observatory, tracking how volcanic rock slowly develops over time into rich soil. Biosphere 2 also offers public tours and hosts space camps and small conferences.

For Wolf, the timing of his film’s release couldn’t be more relevant to our current predicament. “While making this film, I could never have imagined that a pandemic would require the entire world to be quarantined,” he said in a statement. “In light of COVID-19, we are all living like biospherians, and we too will re-enter a new world. The question is how will we be transformed? Now with a visceral sense of the fragility of our world, it’s on us to protect it.”