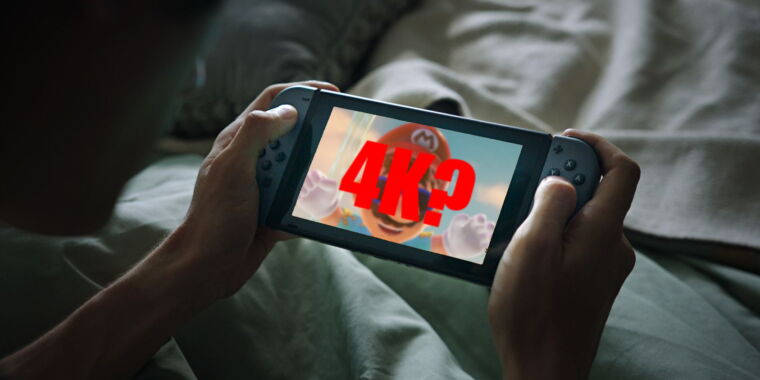 Hardware plans are still in flux, but one report points to games already in the works.

An upgraded version of the Nintendo Switch console appears to finally be on the horizon. Multiple outlets have claimed that Nintendo’s long-rumored plans for a higher-powered Switch are finally moving forward with an expected launch of sometime in 2021.

Reports from both Bloomberg and the Taipei outlet United Daily News allege that this system’s specifications are currently in flux, according to sources familiar with Nintendo’s plans. Bloomberg’s late Monday report claims that Nintendo is considering upgrades like “more computing power and 4K high-definition graphics,” and those details line up with a machine-translated version of UDN’s report from earlier in the day.

Intriguingly, the UDN report points to an aggressive release schedule as early as “Q1 2021,” with hardware production beginning by the end of 2020, but Bloomberg’s report does not mention such a timeframe. Both reports mention a dearth of announced software for Nintendo Switch this holiday season, and Bloomberg reporter Takashi Mochizuki claims this is intentional on Nintendo’s part, in order to bolster “launch” software for the upgraded Switch next year.

Should Mochizuki’s claim be true, we may very well see games like the announced sequel to Legend of Zelda: Breath of the Wild prepared for this new Switch. (That Zelda game was previously announced at E3 2019, only to vanish during this year’s not-quite-E3 series of game announcements.) But neither of Monday’s reports clarifies whether this system and the existing Switch will be interoperable, or whether either system will have exclusive software. And while both reports mention that this will be an “upgraded Switch model,” neither spells out whether it will entirely resemble the existing Switch’s hybrid home-and-portable nature, or whether an update for higher resolutions may require a home-only model.

Gaming industry experts have long speculated that Nintendo could release an “HD Switch” at some point, though previous rumors of such a console eventually fizzled. Those rumors pointed to the creation of a smaller Switch to fill the gap left behind by Nintendo’s lower-priced 3DS console, and those rumors came to fruition late last year. Months later, Nintendo flatly denied the possibility of any new, unannounced Switch model arriving before the end of 2020.

While Nintendo will soon face higher-powered competition from the likes of PlayStation 5 and Xbox Series X, the underpowered Nintendo Switch hasn’t struggled to sell against the current competition (if constant sell-outs at American retailers like Amazon and Best Buy are any indication). The company’s 2020 mega-hit Animal Crossing: New Horizons exceeded 22 million units sold in roughly 4 months, while the hardware itself has blasted past 61 million units sold since Switch launched in 2017.

Nintendo did not immediately respond to Ars Technica’s questions about a possible new Switch model.