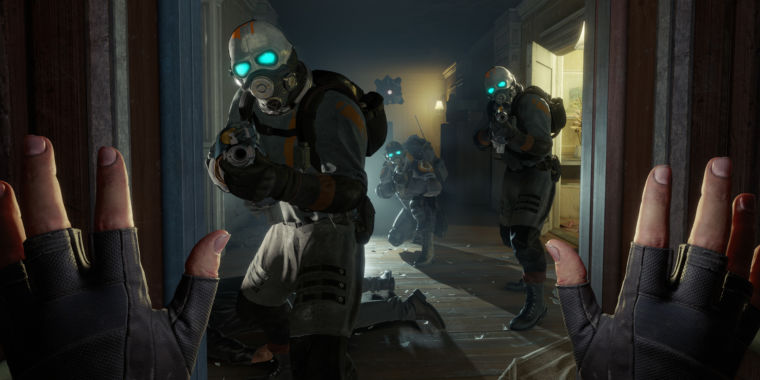 Sales for Valve’s Index virtual reality headset more than doubled between the third and fourth quarter of last year, according to a new report from tracking firm SuperData. That increase—from 46,000 units to 103,000 units sold—would likely have been even greater if the $999 system hadn’t sold out due to inventory issues, the firm wrote.

As we’ve seen in years past, virtual reality hardware sales tend to spike in the holiday quarter, thanks to gift-buying and general holiday splurging. But SuperData cites “anticipation for Half-Life: Alyx” as a main driver for the Index’s holiday sales increase (even though the game will run on any PC-based VR headset). And the Index’s particularly large holiday sales spike seems to have put it ahead of lower-priced (and older) PC-based VR competition from the likes of the Oculus Rift S, HTC Vive, and numerous Windows Mixed Reality headsets.

Despite the holiday spike, sales for all the PC-based headsets continue to pale in comparison to the self-contained, wireless Oculus Quest, which moved 317,000 units during the holiday quarter, according to SuperData. That number might have been even higher, SuperData writes, if Oculus was able to avoid inventory-limited sellouts for parts of the quarter.

The Quest represented the majority of Oculus’ hardware sales in 2019, according to SuperData; its 705,000 units sold surpassed sales of the Oculus Rift and Oculus Go, combined (despite the fact that the Quest didn’t launch until May). At this rate, the number of Quest units could easily surpass the total number of Rift units on the market by the end of 2020. Add in the fact that the Quest can now also be hooked up to a PC for tethered gaming, and we wouldn’t be surprised if the wireless unit becomes Oculus’ main focus going forward.

Despite all the relative sales jockeying among competing headsets, overall sales for the entire category remain too small for the market to be anything but a small niche for the time being. Only PlayStation VR—which recently passed the 5 million sales mark and has outsold all other VR headsets combined—makes anything approaching a dent on the wider gaming market. And the size of that dent is roughly comparable to failed accessories like the Sega CD, proportionally.

Perhaps experiments with better form factors, lower “all-in” prices (as seen in the $399 Oculus Quest), and heavily marketed marquee releases like Half-Life: Alyx will help push VR sales out of the doldrums in the future. For now, though, the entire segment is still waiting for a breakout moment where it catches on with a critical mass of consumers.