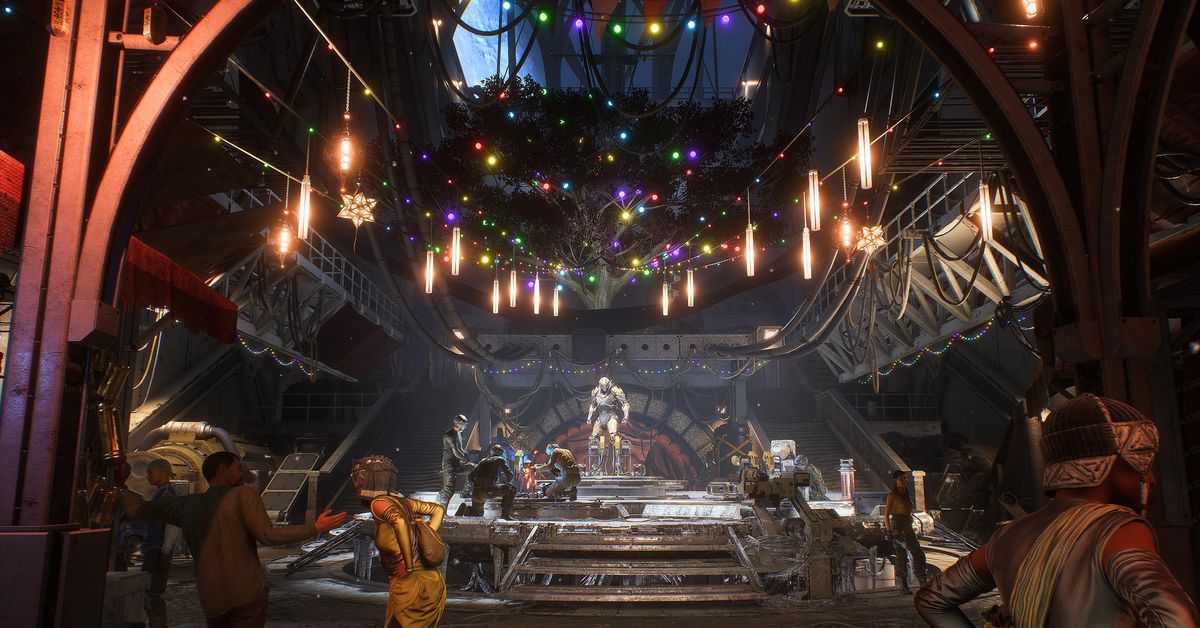 Every Christmas, I leave a few things around the house to make things a little festive. They tend to hang around a little longer than anticipated. Right now, it’s early February, and I still have a couple of strings of lights and a few seasonal flowers hanging around. I work from home, and I find it a little cheerful, OK? That’s not a crime. Luckily, I have found an unlikely ally who agrees with my decorating sense: Anthem.

BioWare’s mech-fighting, rocket-launching, deeply troubled online game has had a rough time post launch. Right now, Fort Tarsis, the main hub, is a little quiet. Luckily, our day is brightened by the fact that the Christmas (er, sorry… Icetide) decorations from December’s seasonal event is still up.

Sam Loveridge astutely noticed the decorations and pointed them out. I logged into the game myself and I can confirm: It’s a little winter wonderland in Fort Tarsis.

This isn’t a good thing for everyone. Pirndel Blatch is the game’s best NPC, and every time I talked to him throughout the campaign, he brought up lots of valid civic planning concerns. Pirndel Blatch is concerned about power cord alignment, corridor space, and queuing. Presumably, he’s furious about the fact that there’s still Christmas decorations everywhere. Someone is going to trip on that tinsel.

For those who are invested in the long-term health of Anthem, this might actually be a bit of a grim scene. After all, it suggests that the developers aren’t going through and keeping the game up to date in little ways. Games like World of Warcraft or Grand Theft Auto Online have long since moved on from Christmas and have celebrated events like the Lunar New Year or Valentine’s Day. After a rough launch and a barren road map, a festively red and green Fort Tarsis might feel like another nail in Anthem’s coffin.

But the presence of these decorations isn’t an oversight. The Icetide season was deliberately extended to run through February by BioWare. However, common etiquette suggests that Christmas decorations should come down around Jan. 5. That’s partly why it’s so eerie to log in and still see seasonal lights twinkling away.

There are rumors that Anthem is getting a large-scale overhaul, but things remain quiet for now in the game itself. At least the decorations and snow show some signs of life, which is a welcome addition to an otherwise deathly quiet game.

We’ve reached out to Electronic Arts for comment, and will update if we hear more about Icetide’s place in the world of Anthem.