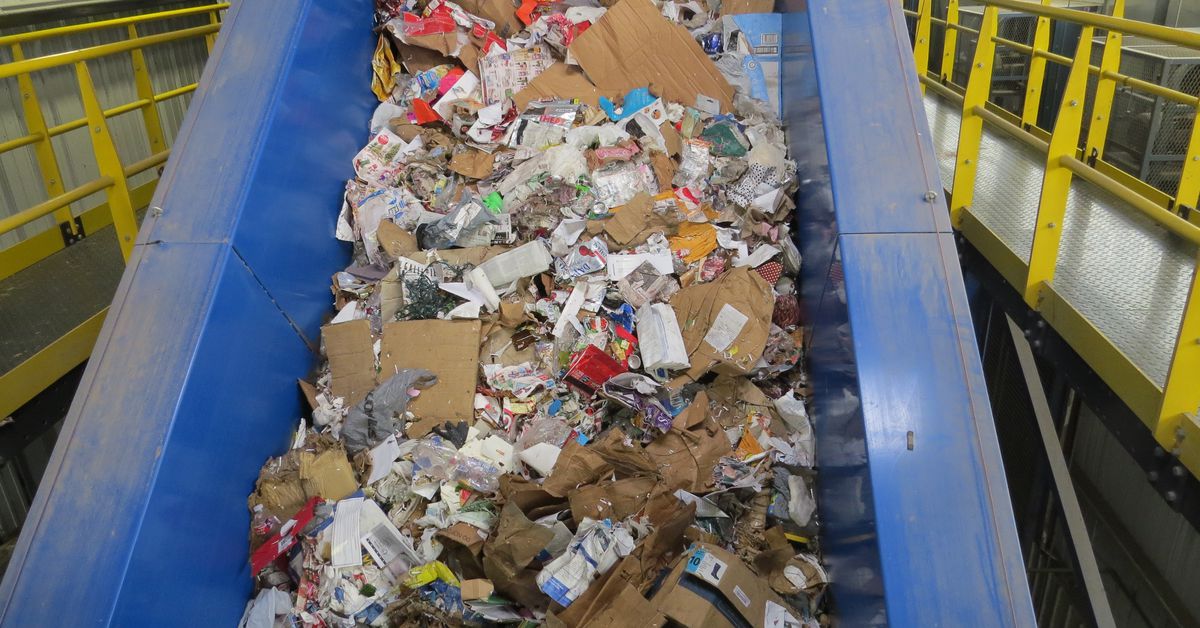 A nightmare for the recycling industry became incarnate when a Texas recycling plant burst into flames in December 2016. The fire caught quickly, melting plastic bottles, consuming cardboard boxes, and incinerating discarded paper. The massive building’s sprinkler system had been damaged in a recent freeze and failed to tamp down the flames. All the firefighters could do was keep the fire contained inside, watching it burn for 12 hours.

By the next morning, it was clear that the facility, a recycling plant that serves the north Texas cities of Plano and Richardson, was a total loss. The fire’s likely cause? The company believes it was a lithium-ion battery, like the one in your cellphone or laptop.

As lithium-ion batteries power more and more of our electronics, they are ending up in our recycling bins, and recycling plants are battling hundreds of battery-caused blazes. What we do with our batteries and electronics at the ends of their lives is fueling one of the biggest emerging problems in the world of waste.

“What keeps me awake at night are these,” Amy Adcox, general manager of Republic Services Plano business unit, says as she waggles her phone. “The electronics.”

She’s standing on a metal platform in the state-of-the-art processing plant in Plano that Republic Services rebuilt after the 2016 fire. Beneath her feet, a conveyor belt rises diagonally from the concrete floor where collection trucks dump their hauls in huge piles, up to the vast web of platforms, conveyor belts, and equipment that sort recyclable materials from the garbage.

Adcox’s smartphone, like virtually all smartphones, is powered by a rechargeable lithium-ion battery. These batteries are small and lightweight and store lots of power. They’re also everywhere. In 2017, the global lithium-ion battery market was valued at more than $30 billion; by 2025, it is projected to grow to more than $100 billion. Standing in that recycling plant, Adcox had at least two rechargeable batteries on her person: in her phone and smartwatch.

“I personally am a big fan of the technology. I think lithium-ion is transformational,” says Ronald Butler, a battery safety expert. But these batteries also have to be handled properly, he says. If they get damaged, overheat, or short-circuit, a rechargeable battery will have what’s called a thermal runaway event, producing heat internally and getting hotter and hotter until it begins to smoke and then burn. Other batteries, like the old-school alkaline triple As, might contaminate a load of recyclable material if they get crushed or damaged. Lithium, on the other hand, burns hot and will quickly catch fire or explode.

Fires are not a new threat for the recycling industry, says Ryan Fogelman, vice president for strategic partnerships at Fire Rover, a company that makes fire prevention systems for industrial sites, including waste and recycling facilities. What’s changing is the frequency, he says. The number of fires at waste facilities across the United States and Canada increased by 26 percent from 2016 to 2019 — from 272 reported fires to 343, respectively — Fogelman finds in his 2019 annual waste and recycling facility fires report, which was published on February 25th. Fires are largely underreported, however, and Fogelman estimates that there were actually around 1,800 fires at waste facilities in 2019.

“Nationally we’re losing about a facility a month, burned to the ground by battery fires,” says Bill Keegan, president of Dem-Con Companies in Minnesota. Dem-Con lost a waste transfer facility in September 2018 to a likely battery fire.

Unlike other common fire threats to recycling facilities — including propane tanks, aerosol cans, and discarded fireworks — these batteries are small and often impossible to spot. A lithium-ion battery in a singing greeting card or a discarded e-cigarette pen is enough to spark a flame. Among the huge piles of waste, they are also virtually invisible. That may be the real danger with these batteries, says Fogelman. Plant workers often can’t see them until it’s too late.

Most battery fires happen on that concrete “tipping floor” where collection trucks dump their loads. When they spill out of the truck into the open space, damaged batteries suddenly have the oxygen they need to start a fire. To address this threat, the new Plano facility features a massive concrete and metal fire wall to separate the tipping floor from the rest of the plant. There’s also a Fire Rover heat-sensitive camera and an automated foam cannon to smother flames. A line of neon-clad employees at the mouth of the first conveyor belt pick out as much problematic garbage as possible.

But despite those precautions, Adcox lives in fear of one of these batteries sneaking up into the belly of the plant itself and damaging the equipment and posing a hazard to her employees. That’s what happened at a similar facility in San Mateo County, California, in 2016, causing a four-alarm fire fought by 100 firefighters and a four-month plant closure. Unfortunately, “the conveyor belt forms a very efficient way to transport the fire throughout the plant,” says Joe La Mariana, CEO of the South Bayside Waste Management Authority (Rethink Waste), a public agency that manages the plant.

All of these fires are, of course, physically dangerous, but they also pose an existential threat to the industry, says La Mariana. Recycling companies can lose customers to competitors for years after a plant fire. Employees have to be furloughed until the plant can be rebuilt. Insurance premiums skyrocket.

Since reopening in spring 2019, workers at the Plano facility have already dealt with three small fires. One was definitely caused by a laptop, the other a cordless vacuum. The vacuum fire had to be put out on the customer’s front lawn since the battery caught fire as waste haulers attempted to unload a curbside recycling bin.

Most people mean well when they attempt to recycle electronics at the curb. They’re almost certainly not scheming to burn entire factories to the ground with illicit batteries. But the risk remains, which is why that combustible battery should never go in your home recycling. Instead, they should go to designated drop-off centers to be properly, and safely, disposed of or recycled. Your local recycling plant will thank you.

Photography by Jillian Mock for The Verge