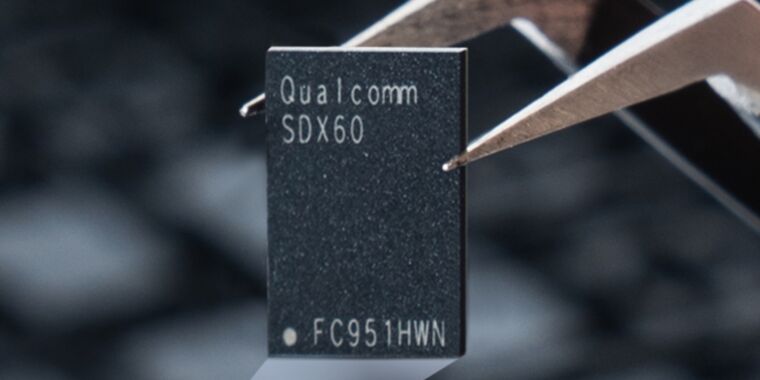 Qualcomm has announced a new 5G modem, the Snapdragon X60. The modem offers aggregation between the two big forms of “5G” (Sub-6 GHz and mmWave), it has a theoretical top download speed of 7.5Gbps, and it’s built on a ridiculously small 5nm manufacturing process. If that sounds like something from the distant future, well, it is! Qualcomm likes to announce these modems very far in advance. The X55 modem that will launch in smartphones this year was announced all the way back in February 2019, so this X60 modem should be on the market sometime in 2021.

The full name of this chip is the “Qualcomm Snapdragon X60 5G modem-RF System,” meaning Qualcomm wants you to buy its X60 modem and separate RF antenna modules together since they are designed as one big package. Since 5G mmWave has poor signal characteristics (it can be blocked by just about everything, including your hand) Qualcomm’s designs put several mmWave antenna modules all around the phone body. Paired with the X60 is Qualcomm’s new QTM535 antenna module, which Qualcomm says is smaller (but it doesn’t say how much smaller it is) than the current QTM525.

Qualcomm’s strategy of building “modem-RF systems” for 5G is something the European Union is investigating right now for antitrust concerns. The EU is concerned that Qualcomm is using its position in the 5G modem market to try to own the RF chip market, locking out competitors like Broadcom (which tried to buy Qualcomm), Skyworks, and Qorvo.

The X60’s theoretical top speeds of 7.5Gbps down and 3Gbps up are not actually any faster than the X55, but 5G networks are nowhere near close to saturating that kind of bandwidth anyway. Qualcomm seems primarily focused on making things smaller, and in this area, the 5nm modem would be an upgrade over the 7nm manufacturing process Qualcomm uses today. Reuters reports that Samsung’s foundry has won a contract to produce these modems, and it also might split the load with TSMC. This means it’s also probably a safe bet that Qualcomm’s flagship 2021 SoC will be built on a  5nm process, after spending two generations at 7nm.

5G is split across two chunks of spectrum: the slower-but-more-practical sub-6GHz 5G and the faster-but-less-practical mmWave 5G. The X60 introduces the ability to use both signals at once, provided you can find a single spot on Earth with access to both signals. The X60 also adds the ability to run voice over the 5G signal, preparing for the even more distant future when we shut down the LTE networks and rely on 5G as the only mobile network.

If all goes well in the mobile industry, we shouldn’t actually see this chip as a standalone package in too many phones. Qualcomm typically makes SoCs with integrated modems, which saves on power usage, cost, and space. During the clunky transition to 5G, though, Qualcomm is burdening the mobile industry with the Snapdragon 865, a chip that doesn’t have any on-board modems at all. The 865 must be paired with a separate 4G/5G modem, the X55, apparently because 5G just isn’t mature enough yet to be integrated into a high-end SoC. This year, Qualcomm managed to have two chips with integrated 5G, the lower-end Snapdragon 765 and 765G. By the time the X60 comes out, we should see it or some other 5G modem integrated into flagship SoCs.

As a standalone chip, the one big target is probably Apple, which is rumored to be integrating Qualcomm 5G modems into future iPhones. Unless the two companies really accelerate things, the X60 would be ready for the iPhone 13 in 2021.