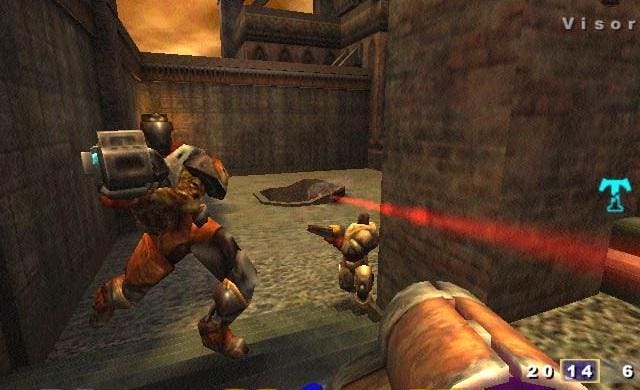 A gamer sets up a bot-vs-bot match on his Quake III Arena server and lets the match run to see how the bots will adapt over a long period of time. The bot AI (artificial intelligence) in Quake III Arena is designed to adapt to new scenarios and situations but these are usually resolved in short matches.

So he starts up the match and then promptly forgets all about it—until four years later when he decides to login and see what’s happening.

So this anonymous gamer downloads the game and logs into the server to see what happens when he enters the match.

Here things just keep getting stranger. When he enters, the bots don’t fire on him—instead, they rotate to turn and look at him, and continue to look at him as he walks around the map.

Then he shoots one, and the bots attack him and before we can find out whether they then turn their weapons on one another, the server crashes.

I have no idea if this story is true—if I had to guess, I’d say it’s probably not.

The story is based on a screenshot taken from a forum and tweeted out by Mat Murray on Twitter. It’s all very Twilight Zone: outlandish, but fascinating. Probably not true, but intriguing nonetheless.

So far as I know, there is no accompanying data, no video footage, no proof that this ever happened. But as Fox Mulder’s poster states: I Want To Believe. Or, at the very least, I want to wonder.

The truth of the story isn’t as important to me as the questions the story raises.

Is it possible that video game bots, designed to provide human players with some non-human competition, could evolve over four years to “learn” that the best way to stay alive is to not kill?

Did artificial intelligence discover the secret to world peace in a forgotten video game server?

An AI based on killing and defeating their opponents discovering that non-violence was a better logical approach to survival would be a pretty spectacular thing, if it’s true.

I suspect that before we’ll have an answer to these questions, we’ll need someone to test the hypothesis by repeating the experiment. In fact, this is one of those experiments that would best be undertaken by the crowd. I’d recommend gamers try out different games as well as Quake III Arena. The more the better.

Start up your servers, start the match, and let it run for the next half-decade. Log your process and record your findings. We’ll either verify the results or not.

In the end, maybe our AI will be smarter than we give it credit for, or maybe our hopes will be dashed. Either way, I want to find out.

Another question: If this is a hoax, do you think it’s possible that somewhere in the future we’ll devise AI that can come to this sort of stalemate or conclusion? Can AI designed to compete ever make a truce?