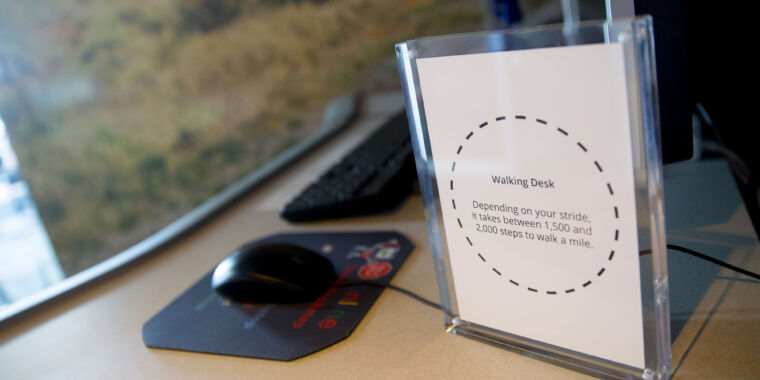 Some years back, not content with sitting at a computer all day for work and not happy just to stand in one spot, I embarked upon a quest to walk while working. Since then, I built two of my own “treadmill desks” for a few hundred bucks each and logged thousands of miles on them.

They certainly aren’t flashy kit, but they keep me happier and healthier when I work from home. And in the midst of our global quarantine, I thought my setup might prove inspirational to some of my fellow geeks.

I have now built two different DIY treadmill desks, one in the US and one in the UK. In both cases, I purchased an old treadmill for about $200, added either shelving from Home Depot (about $100) or a standing desk from Ikea (about $150), and was good to go. When I first did this about seven years ago, pre-made “treadmill desks” started at around $1,500—though entry-level walking units—now appear to start around $500. Personally, though, I preferred an older, heavy-duty treadmill to an inexpensive, light-weight model.

Most running treadmills are way overbuilt and will last much more than 10 years. You might even know someone with an old, ignored treadmill just sitting in their basement or garage. If you don’t, then Craigslist (or Gumtree if in the UK) is your friend; if you’re not in a rush, you can always get a deal.

Really cheap treadmills often have a very small footprint. I took care to avoid those, since when walking and working I pay less attention to where I am stepping, so I wanted a large target for my feet. This is less of an issue in the United States, where things tend to be larger, but it was rather important in the UK where there’s a preponderance of small and inexpensive treadmills.

On the contrary, it was pretty easy to pull the control panel out of the Reebok treadmill, so I was able to discard its arms and just hang the control panel off my Ikea desk. This was a nice solution, since the desk has a crank to easily move it up and down, allowing my wife and I to share the walking desk. (The shelving unit I used for the Smooth treadmill is effectively a fixed height, as it’s really fiddly to adjust.)

For the Smooth treadmill, I wanted the option to sit at the treadmill, since it was set up with my large, high-res external monitor. I built a wood platform that could sit atop the treadmill belt and then got a bar chair for $25 from Ikea. While this setup worked, it was a mite precarious; I didn’t end up using it much. Instead, when I wanted to sit, I just used my nearby desk and gazed longingly at my nice, large monitor over by the treadmill.

As the Smooth treadmill setup didn’t require me to remove the arms, the treadmill was intact and, therefore, fully functional. I added wheels to the wire shelving unit, allowing me to easily roll it out of the way so that I could run on the treadmill while watching a movie on my large monitor. (This isn’t a viable option with the Reebok, since I removed the arms.) I should add that the wheels are locking wheels and, since they added a little wobble to the shelving unit, I used small bungees to strap the unit to the treadmill arms, adding stability to the keyboard/mouse platform. I used bungees instead of zip ties so I could easily move the shelving out of the way when I wanted to run.

While a bit of wobble isn’t a problem for the desk being used for the keyboard and mouse, it is important that the external monitor does not rest on anything that is physically in contact with the treadmill or with you. The treadmill will shake the external monitor, which is just as annoying as you might expect. In my case, I put the monitor on a second wire shelving unit that was positioned directly behind the treadmill. This had the added advantage of offering shelving for my gaming systems and a framework from which to hang external speakers.

When I first started using the setup, I walked about 0.5 miles per hour. Every few days, I upped the speed a bit and eventually settled on 1.8 miles per hour—a comfortable and safe speed for me. I’ve walked faster when, for example, playing video games with a controller, but that can get a little hairy.

At 1.8 miles per hour, I’ve not noticed any negative impact on my work or ability to use the computer (reading, writing, drawing, etc.). I have no problems using a trackpad, external mouse, or keyboard. I can even eat and work without issue, although I’ve been walk-working for about seven years now, so this might be something for newbies to work up to.

Over those years, I have walked over 3,000 miles while working (I’m not a full-time telecommuter, so I only do this on days I work from home). On a good day, I might walk eight to 10 miles, which leaves me feeling great and agreeably tired—like I just went on a long hike. I’ve also found the continued walking keeps me awake and alert. In turn, I’ve started feeling somewhat sluggish and tired when sitting at my desk for too long of a stretch.

So, there you go—simple but effective. What other work hacks have readers come up with to make computing at home more pleasant?