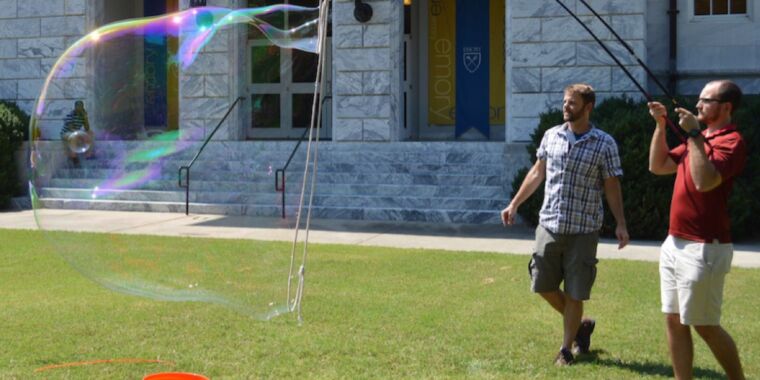 Everybody loves bubbles, regardless of age—the bigger the better. But to blow really big, world-record-scale bubbles requires a very precise bubble mixture. Physicists have determined that a key ingredient is mixing in polymers of varying strand lengths, according to a new paper in Physical Review Fluids. That produces a soap film able to stretch sufficiently thin to make a giant bubble without breaking.

Bubbles may seem frivolous, but there is some complex underlying physics, and hence their study has long been serious science. In the 1800s, Belgian physicist Joseph Plateau outlined four basic laws of surface tension that determine the structure of soapy films. Surface tension is why bubbles are round; that shape has the least surface area for a given volume, so it requires the least energy to maintain. Over time, that shape will start to look more like a soccer ball than a perfect sphere as gravity pulls the liquid downward (“coarsening”).

Bubbles and foams remain an active area of research. For instance, in 2016, French physicists worked out a theoretical model for the exact mechanism for how soap bubbles form when jets of air hit a soapy film. They found that bubbles only formed above a certain speed, which in turn depends on the width of the jet of air. If the jet is wide, there will be a lower threshold for forming bubbles, and those bubbles will be larger than ones produced by narrower jets, which have higher speed thresholds. That’s what’s happening, physics-wise, when we blow bubbles through a little plastic wand: the jet forms at our lips and is wider than the soapy film suspended within the wand.

In 2018, we reported on how mathematicians at New York University’s Applied Math Lab had fine-tuned the method for blowing the perfect bubble even further based on similar experiments with soapy thin films. They concluded that it’s best to use a circular wand with a 1.5-inch perimeter and gently blow at a consistent 6.9cm/s. Blow at higher speeds and the bubble will burst. Use a smaller or larger wand, and the same thing will happen.

But what about blowing gigantic bubbles or long, thin soap films that can span two stories? Justin Burton, co-author of the latest paper and a physicist at Emory University specializing in fluid dynamics, first got intrigued by the topic at a conference in Barcelona. He saw street performers producing giant bubbles about the diameter of a hula hoop and as long as a car.

He was especially intrigued by the shifting rainbow of colors on the bubbles’ surface. This effect is due to interference patterns, created when light reflects off the two surfaces of the film. For Burton, this was also an indication that the thickness of the soap was just a few microns, roughly equivalent to the wavelength of light. He was surprised that a soap film could remain intact when stretched so thin into a giant bubble and started doing his own experiments, both in the lab and his own backyard.

While perusing the open access Soap Bubble Wiki, he noticed that most of the favored recipes for bubble solution included a polymer—usually natural guar (a common thickening food additive) or a medical lubricant (polyethylene glycol).

Using those recipes as a guide, “We basically started making bubbles and popping them, and recorded the speed and dynamics of that process,” said Burton. “Focusing on a fluid at its most violent moments can tell you a lot about its underlying physics.”

For their experiment, the researchers created various mixes of water, soap, and long-chain polymers to make their bubbles. Unfortunately, blowing a 100 m3 bubble is a poor use of lab space, and quite difficult to measure accurately, so the soap films were created using a cotton string, and the thickness was measured using infrared light. In addition to measuring the thickness, they also tracked the lifetime of each film.

Burton and his team concluded that it was the polymeric strands that were the key to producing giant bubbles, confirming the collective online wisdom. “The polymer strands become entangled, something like a hairball, forming longer strands that don’t want to break apart,” said Burton. “In the right combination, a polymer allows a soap film to reach a ‘sweet spot’ that’s viscous but also stretchy—just not so stretchy that it rips apart.”

The team also found that varying the length of the polymer strands resulted in a sturdier soap film. “Polymers of different sizes become even more entangled than single-sized polymers, strengthening the elasticity of the film,” said Burton. “That’s a fundamental physics discovery.”

You can find Burton’s giant bubble recipe in the sidebar. But be forewarned: there are some factors that can’t be controlled in a real-world setting (as opposed to Burton’s laboratory environment), like humidity levels.